A persistent heat wave is expected to grip much of the northern U.S. through the weekend, bringing triple-digit temperatures and potentially dangerous weather conditions.

Temperatures in parts of central California spiked to more than 100 degrees in the days following Memorial Day and Excessive Heat Warnings and Watches and Heat Advisories were issued in the state by the National Weather Service (NWS). 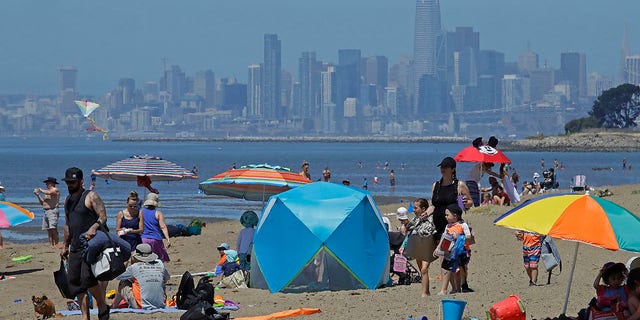 In this May 26, 2020, file photo, people congregate on Robert W. Crown Memorial State Beach with the San Francisco skyline as a backdrop in Alameda, Calif. Officials are urging residents to stay hydrated and find shade as temperatures soar across much of central and northern California. Over 9 million people are under a heat advisory or excessive heat warning. With the soaring temperatures comes an increased risk of wildfires in the state where vegetation is extremely dry after a winter and spring with relatively little rain and snow. California’s power grid operator says it’s not anticipating outages during the heat wave. (AP Photo/Ben Margot, File)

To the south, Las Vegas temperatures were also predicted to either tie or break previous record highs.

Cooler temperatures from a cold front will sweep the Pacific Northwest by the weekend, and the frontal boundary could lead to scattered thunderstorms throughout the Northwest Great Basin and northern High Plains.

Nevertheless, fire officials have reminded residents to be wary of heat-related illness and keep hydrated.