Five hundred of the state’s repeat violent offenders have been offered an experimental option aimed at encouraging them to give up their lives of crime.

The operation, started in January and based on similar strategies in London and Sacramento, California, is an attempt to take advantage of a slump in some crimes as a result of Melbourne’s COVID-19 lockdowns. 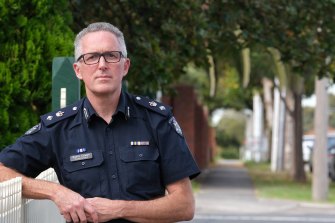 Superintendent David Cowan, based in Dandenong, has begun a trial aimed at stopping violent criminals from reoffending.Credit:Luis Enrique Ascui

Dandenong-based superintendent David Cowan said a 19 per cent drop in assaults not related to family violence and a 24 per cent decrease in burglaries was an opportunity for police to think a little differently.

“We don’t want to sit back and wait for crime to resume,” Superintendent Cowan, a member of the Australia and New Zealand Society of Evidence-Based Policing, said. “We have an obligation to do what we can to stop it returning.”

A group of 1000 was selected because police considered them to be at a high risk of reoffending, having committed two or more violent crimes, such as armed robberies and carjackings, in the past three years.

Half the group received unannounced home visits, while the rest were in a control group and left alone.

Those who received a visit were given a “desistance letter”, designed with a government behavioural unit, that said the individual had been identified as a risk of future offending and even imprisonment. Use the pandemic, the letter urged, as an opportunity to turn away from crime.

Results from the two groups will be compared after six months and a year. 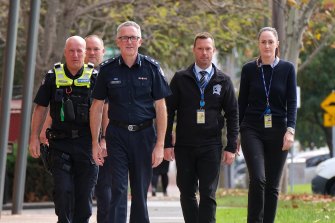 Superintendent Cowan with police from Dandenong who took part in the operation.Credit:Luis Enrique Ascui

Superintendent Cowan said the home visit would involve a knock on the door from a detective or a youth liaison officer, who would let the offender know that while they weren’t in trouble, they were on the police radar.

Police would also offer to put them in touch with support services for help with issues such as drug addiction or unemployment.

Superintendent Cowan said some did not answer the door or refused to engage with police. Because police weren’t there to force a conversation, they would leave.

Police rated about half the visits as meaningful and offered referrals in two out of three visits.

Superintendent Cowan said the visits were a chance to talk to offenders outside a time of crisis.

“Police have, in my view, an obligation to do more than react and arrest offenders,” he said.

Former New Zealand police officer and Monash University criminologist Ross Hendy said if the trial took an evidence-based policing approach, then the operation could be a sound strategy to try, particularly with a proper evaluation.

“From a theoretical viewpoint, the fact that interaction does occur reinforces a proactive deterrence message that may be the thing that tips the balance between further offending or not,” Dr Hendy said.

Jesuit Social Services chief executive Julie Edwards, who had not seen the detail of the operation, warned that an admirable police desire to provide support could actually lead to people feeling like they are being harassed.

Rather than a visit from police, Ms Edwards said she would be keen to see more done to help people stay out of the justice system through education, training and work.

“I’d much rather see those sorts of things strengthened, rather than what can easily be taken as over-policing or over-monitoring of people who have actually done what they had to do to complete their sentences or their order,” she said.

Our Morning Edition newsletter is a curated guide to the most important and interesting stories, analysis and insights. Get it delivered to your inbox.

Tags: ‘ta, given, offenders, Pep, violent
You may also like
Recent Posts