BRITS will be basking in 25C sunshine this weekend on what's set to be the hottest day of the year so far.

After weeks of chilly weather and torrential rain, Brits can expect to enjoy the sunshine this Bank Holiday with mercury hitting the mid-20Cs.

Despite some Brits waking up to cloudy skies this morning, warm sunshine is expected to break through as the day goes on.

And into Sunday, the weather will pick up for most areas in the UK as Brits will be able to bask in sunshine and enjoy a warm Bank Holiday.

Temperatures are expected to reach 23C in London on Saturday and 24C in Manchester and Liverpool on Sunday.

But Britain is bracing for its hottest day of the year so far.

On Monday, the mercury is set to reach 25C, meaning it would surpass the current high for 2021, which was 24.5C recorded in Kew Gardens on March 31.

"Finally, some warm sunshine on offer this May after what has been a very, very chilly month." 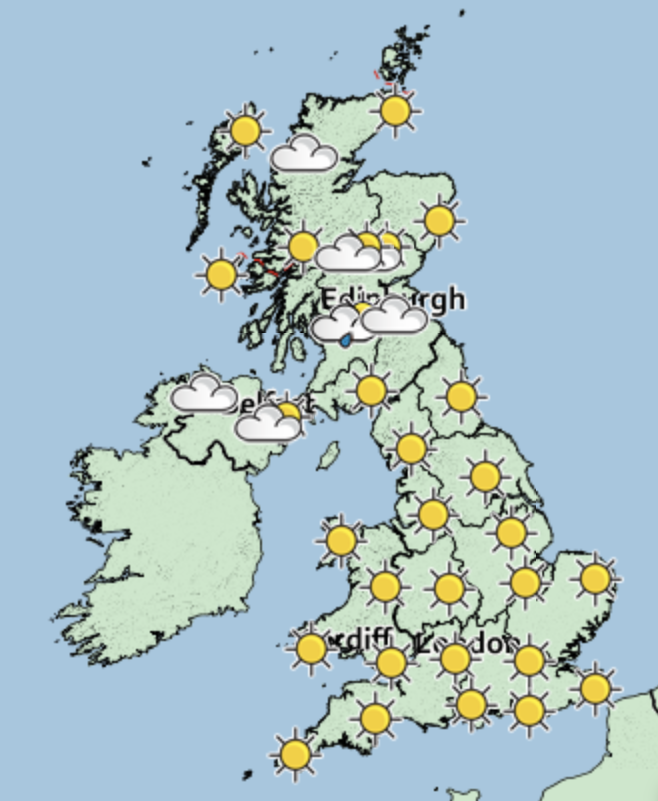 He added: "We will start the weekend with a lot of cloud and for some it will be a bit damp and dreary, initially, certainly over the Midlands, parts of Wales and the west coast of Scotland, but that rain should be fizzling out through the morning.

"Most places will steadily brighten up but it could take a while.

"Some places will be cloudy into the afternoon, but generally it is turning sunnier as the day goes on."

Spring has been plagued by thunderstorms and gales, a stark contrast to the balmy sunshine this time last year.

Wales has suffered its wettest May on record, with figures going back to 1862 – and there's still another week of the month to go.

MOMENT IN THE SUN

Dorset, Bristol and eastern parts of Scotland have also been particularly hard-hit by downpours.

Across the UK as a whole, it has been the fourth wettest May on record, according to figures from the Met Office.

Met Office forecaster Matthew Box said the news would be a "welcome change" for many.

He said: "Given that we have had a reasonably cold and then a wet couple of months through spring, with April being cold and May being wet and cloudy and generally on the cool side too, we've got a sunny end to May."

The warm weather is set to continue for the first half of June as the Met Office's long range forecast predicts the heatwave will stay for up to two weeks.

The first week will see the warm, settled conditions we see this weekend continue.

And for the second week above average temperatures remain, however there will be some showers.

The bright spell is set to see millions of cooped-up Brits flocking to the coast in the coming months – with this summer tipped to be the busiest on record for beachgoers.

Tags: -, bask, Brits, in, to, UK, weather
You may also like
Recent Posts