Ministers have been accused of leaving it too late to ramp up the UK’s coronavirus testing amid shortages of chemicals and swabs.

Boris Johnson is facing jibes that the push toward mass testing was left ‘too late’, with the whole world now seeking the same critical materials.

Chris Hopson, chief executive of NHS Providers – the body that represents trusts up and down the UK, said the country had the lab capacity to be doing even more tests than Germany.

However, the difficulties in sourcing chemicals and swabs has slashed the potential 100,000 a day capability, and the numbers appear to be stuck at around 10,000.

Germany swabs around 90,000 people every day and has plans to scale up its mass testing regime even further to 1.4million a week.

At the daily No10 media briefing this evening, Business Secretary Alok Sharma denied a ‘political’ decision had been taken not to increase testing.

He said getting numbers up was the ‘top priority’ for the government.

PHE medical director Yvonne Doyle said there was a goal to test ‘hundreds of thousands’ of NHS staff.

But neither Mr Sharma nor Prof Doyle committed to any firm dates for hitting the numbers. 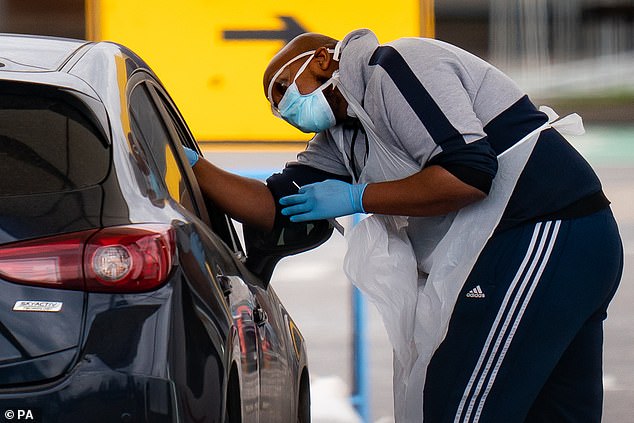 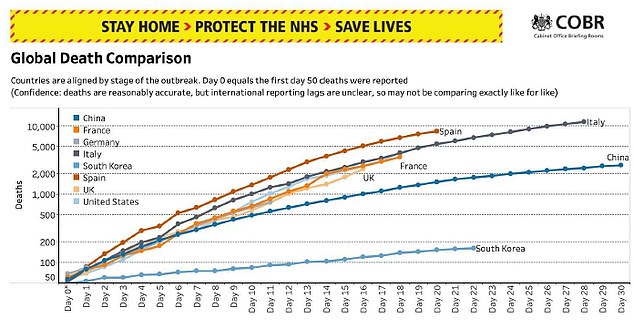 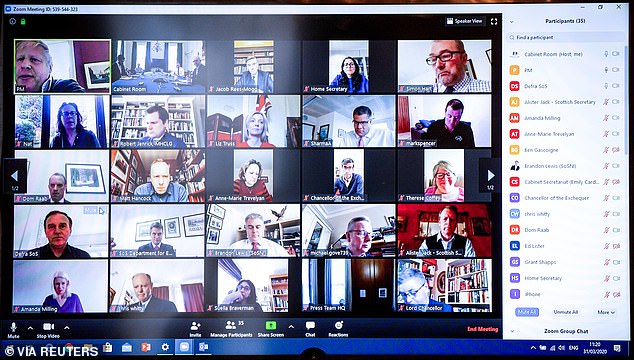 Boris Johnson (pictured top left taking a virtual Cabinet meeting from self-isolation in No10 yesterda) is facing jibes that the push toward mass testing was left ‘too late’, with the whole world now seeking the same critical materials 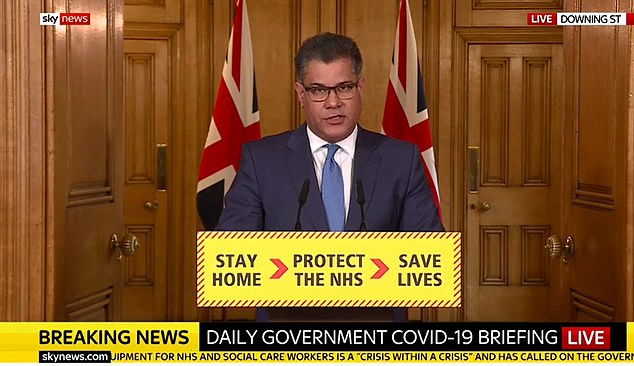 At the daily No10 media briefing this evening, Business Secretary Alok Sharma denied a ‘political’ decision had been taken not to increase testing

February 21: Government experts conclude at a meeting that the disease is still only a ‘moderate’ threat to the UK.

March 12: The UK shelves efforts to test and ‘contact trace’ everyone with symptoms on March 12, as the government’s response moves from ‘containment’ into a ‘delay’ phase.

Instead people who think they have the illness are urged to self-isolate unless their conditions became so severe they need medical help.

March 16: Boris Johnson urges Britons to follow ‘social distancing’ guidelines as well as isolating when they have symptoms, in a change of policy after modelling found the death toll could be much higher than previously estimated.

March 21: Downing Street sends an email to research institutions begging for machines needed to process testing samples. No10 denies this was the first time it had raised the idea.

March 28: Cabinet ministers Matt Hancock and Michael Gove hail news that the UK is now carrying out 10,000 tests a day.

April 1: The UK has still not carried out 10,000 tests in a day, despite apparently having the capacity to do so.

Ministers admit the target of 25,000 tests a day might not be reached for weeks.

The Department of Health and Social Care today sparked fury by announcing 10,412 tests were carried out yesterday – but that the capacity was 12,799.

Questions were asked over why officials failed to meet capacity, with furious Britons calling the shambolic approach ‘disgusting’ and demanding action.

Mr Hopson claimed some laboratories dotted across Britain were ‘not working at full capacity’ but added others are ‘struggling with high volumes’.

And he warned trying to match capacity with demand was notoriously difficult, saying it explains the ‘frustrating difference’.

Mr Hopson tweeted earlier: ‘We understand that if existing NHS pathology labs had unlimited swabs and reagent there is enough test machine capacity to process c100,000 tests a day but reagent and swab shortage is currently limiting this to c13k a day. Shows impact of shortages on current test capacity.’

Mr Hopson estimated that 15 per cent of NHS staff were off work, and initial testing over the weekend had found that just 15 per cent of those self-isolating were infected with coronavirus.

‘It’s a very, very small sample size because we only really started doing staff testing properly Saturday-Sunday, but I’m told that the very early results from that very small sample did indicate that only 15 per cent of people taking the test were positive which effectively means that the other 85 per cent are potentially available to come back to work.’

Mr Hopson said he believes an average of 15 per cent of all NHS staff are currently off work and urged the Government to give an estimate of how quickly testing capacity can be ramped up.

‘Our understanding is that as of the middle of… the late end of last week it was about 15 per cent of NHS staff, which given the sickness rate, absence rate that you would normally expect to see in the NHS of around I think 3-4 per cent, you can see how big that gap is.’

Prof Doyle said there is currently capacity for around 3,000 tests for frontline NHS staff, which will increase.

Asked how many frontline workers are being tested, she said: ‘The number of tests undertaken in the NHS and Public Health England combined testing capacity is just increasing at the moment.

‘So that will be a relatively small number but there is capacity, for example, today for almost 3,000 and that will increase as we get to 25,000, that capacity.

‘But the important capacity is in the second strand where we have five centres where people can drive through and get their testing done in order of priority.

‘NHS chief executives are identifying that priority and the intention here is to get from thousands to hundreds of thousands within the coming weeks.

‘So we are very committed to our NHS frontline staff.’

“We’re now at 10,000 tests a day, we’re rolling out additional networks of labs and testing sites.

“And in terms of PHE (PPE), over the last two weeks 390 million products have been distributed.

“And of course we will continue to do more and work to make sure that PHE (PPE) is available.”

Officials yesterday decided to blame a shortage of chemical reagents for the UK’s lacklustre testing policy.

It comes as ministers were today accused of  ‘complacency’ and snubbing offers of help from labs today.

Questions have been raised about drive-through swab stations that have been set up for health workers, with one site in Chessington almost deserted.

Downing Street has admitted just 2,000 frontline NHS workers have been tested for coronavirus as Matt Hancock today ordered hospitals to ‘max out’ testing capacity on doctors and nurses.

The government has faced fierce criticism of its testing efforts relating to health workers amid claims 15 per cent of the NHS workforce could be self-isolating and suggestions 85 per cent of them do not have coronavirus.

Ministers have been scrambling to boost the UK’s testing capacity and today Number 10 said the nation now had the ability to conduct 12,750 tests a day.

However, the latest number of tests actually carried out was 8,630 on Monday – far below the capacity figure.

As a result, Mr Hancock, the Health Secretary, has now ordered the NHS to lift restrictions on staff testing.

NHS England had previously told hospitals they could only use 15 per cent of tests on staff with the rest to be used on patients.

But now the 15 per cent cap has been lifted and hospitals have been told they must now ensure any spare testing capacity is filled with staff tests.

In comparison, another site in Wembley was rammed. Some NHS workers claimed they had been turned away in Chessington for not having an appointment.

Although the Chemical Industry Association – and even one of the government’s own advisers – initially played down the issue, firms have confirmed that they are scrambling to get hold of ‘reagents’.

Diagnostics industry group BIVDA confirmed that there are problems. Chief executive Doris-Ann Williams, said: ‘Provision of the different tests for this new disease is challenging.

‘The IVD (in vitro diagnostics) industry has been working to support the NHS to implement testing here in the UK, as it has been doing for healthcare systems around the world.

‘This continues with manufacturers doing all they can to ensure continuous supply of the necessary reagents to enable antigen testing during this unprecedented crisis. However there is global demand and manufacturing capacity is being increased at pace along with the logistics to distribute it but none of this can be achieved overnight. But we can assure you that everything that can be done is being done.’

Shadow health secretary Jon Ashworth said: ‘Germany are testing half a million people a week, yet we still haven’t hit the 10,000 a day the Prime Minister promised.

‘NHS staff are rightly asking if we’ve left it too late to buy the kits and chemicals we need, or whether our lab capacity is too overstretched after years of tight budgets. 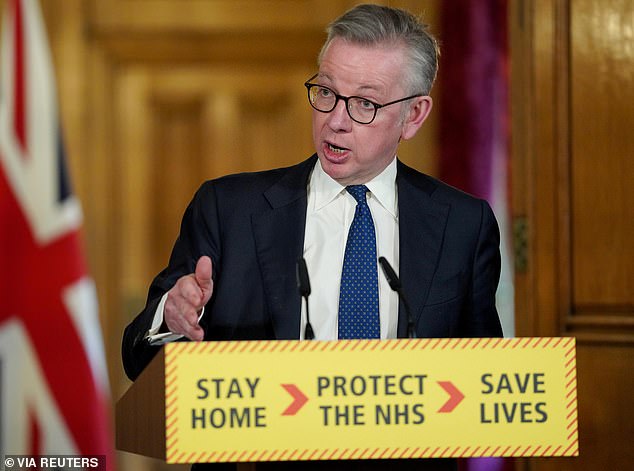 ‘NHS staff and carers on the front line who need these tests urgently deserve an immediate explanation from the Government as to what’s going on.’

Meanwhile, there are complaints that the ‘centralised’ approach taken by Public Health England (PHE) meant that labs have been left ‘sitting on their hands’.

It is still not clear when a new coronavirus ‘super lab’ in Milton Keynes will be up and running. In contrast, Germany has authorised any institution with the right capability to get on with checks.

The consequences of the lack of testing for current infections has been laid bare after it emerged that in initial trials just 15 per cent of NHS staff who were isolating did not in fact have the virus – meaning hundreds of thousands could potentially have been working. It is understood just 2,000 have been screened.

Housing Secretary Robert Jenrick today admitted that the level of checks had only been rising slowly, but suggested it would ‘accelerate’. However, he confirmed it will be weeks before the UK hits 25,000 tests a day, by which time the outbreak might be peaking.

It means the true size of the crisis – which began spreading in the UK in February – is a mystery, with millions of cases potentially missed.

NHS trusts were earlier this week told they could begin to use 15 per cent of testing capacity to frontline staff,

Tags: it, late, left, to, UK
You may also like
Recent Posts