Coronavirus swabs should be analysed in batches to speed up Government’s lagging testing programme, experts say

Coronavirus swabs should be analysed in batches to speed up the Government’s lagging testing programme, experts say.

The method, known as pooled testing, involves combining multiple swabs in a batch into a single test tube.

If Covid-19 is not detected in the combined sample, all patients are presumed to be negative. If any viral particles are picked up, all original swabs are then tested again individually.

Researchers say the method — already deployed in Germany — could help to rapidly increase testing capacity at a time when the demand is outstripping supply.

The technique is intended to save time and resources — in theory, 50 to 100 swabs could be combined to produce a single result.

Experts in Germany pool as many as 30 samples in one go, but scientists admit that borderline positive samples — often yielded by people swabbed in the very early or late stages of their infection — can slip under the radar using the method.

Boris Johnson has ambitions to swab 10million people a day but the UK is currently struggling to turn-around more than 250,000.

University College London and the London School of Hygiene and Tropical Medicine have called for the method change in an editorial in the Journal of the Royal Society of Medicine.

The authors also recommended a major investment in people on the ground who can knock on doors to support the UK’s beleaguered contact tracing system.

The system has reached 91.8 per cent of cases and 78.8 per cent of contacts, compared to the UK’s centralised system which is struggling to find six in 10 contacts.

The researchers write that this approach would also be much less costly than the UK government’s £100billion ‘Operation Moonshot’, but far less grandiose. 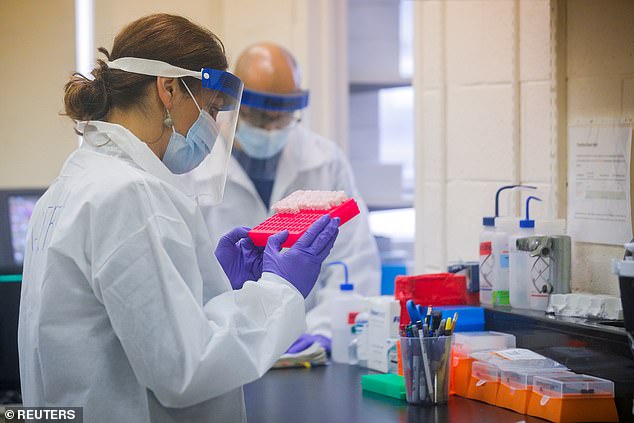 Coronavirus tests should be analysed in batches to speed up the Government’s lagging testing programme, experts say. The method, known as pooled testing, involves combining small amounts of multiple swabs in a batch into a single test tube (file)

Several other countries – including China, the US, Germany, Portugal, New Zealand, Rwanda, Uruguay, Israel and Vietnam – have used pooled testing to considerably increase testing capacity and decrease pressure on lab reagents and operators.

As outbreaks grow and positivity rates rise, however, pooling becomes less efficient because more samples have to be tested.

The authors said in the paper: ‘We are close to missing that window of opportunity in England unless we can control transmission quickly.

‘For now, pooling may be best reserved for surveillance testing and asymptomatic screening of healthcare workers, care homes and hospital pre-admissions.’

The researchers set out a number of other recommendations, including making use of lab capacity in universities and research institutes.

Experts at these facilities have for months been calling for the Government to utilise their spare lab space to help process thousands more Covid-19 tests each day.

Sir Paul Nurse, chief executive of the Francis Crick Institute, has repeatedly slammed ministers for keeping independent labs out of the loop in favour of the government’s seven Lighthouse Labs.

The Nobel Prize-winning geneticist urged Boris Johnson to summon the Dunkirk spirit and let the ‘small ships’ help process tests at the start of April. But his pleas for the UK to adopt a German-style mass network of labs have gone unanswered.

British scientists have developed a rapid coronavirus test they say can spot the disease in less than five minutes.

The Oxford University team behind the device hope it will be ready to be rolled out nationwide in the middle of next year.

It works using a nasal swab that is inserted into a cartridge that scans for antigens, or proteins found on the surface of Covid-19.

The test can also tell the virus apart from other infections such as flu and seasonal human coronaviruses, according to a small study of its efficacy.

Its creators envisage it being used to test people en masse at airports and in offices to keep the economy afloat.

If proven to work on a large scale, the device will be three times faster than current rapid tests being reviewed by the UK Government.

Ministers are in the market for quick antigen tests, which would play a key role in Boris Johnson’s ‘Operation Moonshot’ project to carry out 10million tests a day.

Antigen swabbing is generally considered a less accurate – though much faster – method of testing.

But they require processing with expensive laboratory equipment and chemicals and take days to turnaround a result.

Antigen tests aren’t as sensitive as the PCR versions, which can pick up minuscule amounts of the SARS-CoV-2 virus that causes COVID-19.

But proponents argue that the rapid tests could be a game changer because they can be rolled out in vast numbers and immediately spot those at greatest risk of infecting others.

Oxford University said it hoped to start product development of its test in early 2021 and have an approved device available six months afterwards.

Meanwhile, the new paper also called for environmental surveillance by testing wastewater for Covid-19 as an early warning system for outbreaks in cities.

Recognising the important role played by superspreading events, another of the recommendations is to increase resources to enable a greater focus on identifying clusters using retrospective tracing, as seen in several countries that have been most successful such as Japan, South Korea, and Uruguay.

Another of the authors, Professor Martin Mckee, of the London School of Hygiene and Tropical Medicine, said: ‘England stands on the edge of a precipice: find, test, trace, isolate and support strategies need to be re-thought to have any chance of avoiding a considerable rise in cases over the coming months requiring a return to stricter social distancing measures nationwide.

‘Our recommendations are feasible, do not require further individual sacrifice and would likely have a significant impact on driving down the reproductive number and reducing the socio-economic impact of the pandemic if they were implemented quickly.’

The authors were critical of Britain’s test and trace programme, which only reached 63 per cent of close contacts of people who had tested positive for the virus last week.

Damning figures published by the Department for Health show the system failed to speak to 81,000 contacts of Covid-19 cases in England in the first week of October, meaning tens of thousands of infected people may have been allowed to walk the streets without knowing they were carrying the disease.

And one-in-five Covid-19 positive patients aren’t reached for at least three days, meaning it is taking even longer to get to many of the contacts who are reached increasing the risk of the virus being spread before they develop symptoms.

Contact tracers were required to reach 216,000 contacts of those who had tested positive for coronavirus in the first week of October, more than double the previous week’s 101,000 identified contacts.

For cases handled by local health protection teams, 97.7 per cent of  almost 27,000 contacts were reached and asked to self-isolate in the week to October 7. Only 613 were not contacted.

For those handled either online or by call centres, 57.6 per cent of 189,000 contacts were reached and asked to self-isolate. As many as 40,000 were not reached, and an additional 40,000 could not be reached as no contact details were provided.

Contact tracers were also asked to get in touch with 87,000 positive cases of coronavirus, which was also more than double the previous week’s more than 34,000.

Of these as many as 20,000 were not reached and asked to provide details of their close contacts by the service during the first week of October, suggesting that Britain’s outbreak will continue to grow as thousands of contacts exposed to the virus are not told to self-isolate.

This means they continue circulating in the community and inadvertently spreading the virus, as people tend to become infectious before developing tell-tale symptoms – a high temperature, continuous cough and loss of taste or smell.

It was the highest weekly number of Covid-19 infected patients not reached since Test and Trace was launched at the end of May.

Home testing kits are now taking 75 hours to be processed by labs, and only 16 per cent are having their test results sent out within 48 hours.

This is a significant drop from the last week in September when 30 per cent were receiving their results within 48 hours.

There were 1.5million tests carried out under Pillar 2 in the first week of October, which includes home-testing kits and those done on drive-through and mobile testing sites.

Boris Johnson had pledged to get all coronavirus test results out within 24 hours by the end of June, but this promise has not been met.

Tags: be, Coronavirus, should, swabs, UK
You may also like
Recent Posts