Professor Chris Whitty spoke as figures released today show that Berlin has managed to keep its death toll below that of the UK despite having around double the confirmed cases.

Today was Britain’s darkest day yet in its coronavirus crisis with 786 more fatalities confirmed in the past 24 hours, taking the total death toll to 6,159 victims from a total of 55,242 positive tests.

In contrast, Germany has reported more than 100,000 cases of coronavirus but just 1,600 deaths, and the Government is already privately discussing lifting its movement restrictions.

At tonight’s televised news conference, Prof Whitty added: ‘We all know that Germany got ahead in terms of its ability to do testing for the virus and there’s a lot to learn from that and we’ve been trying to learn the lessons from that.’ 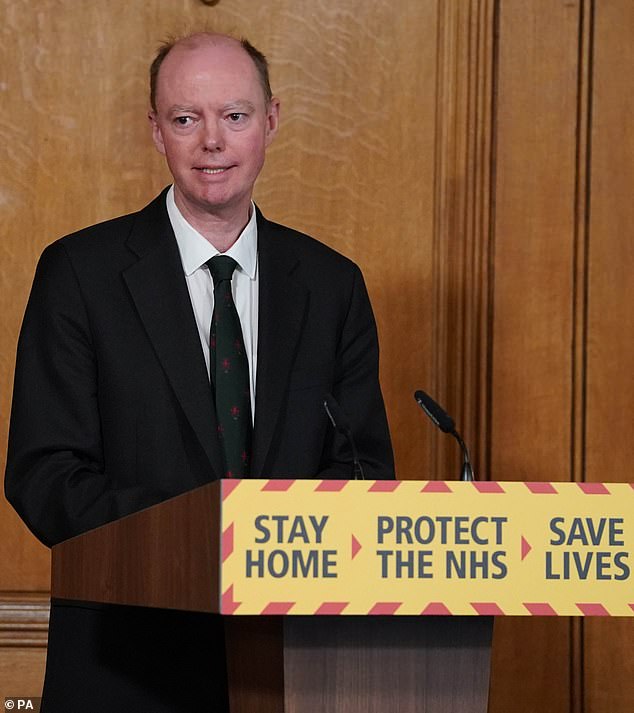 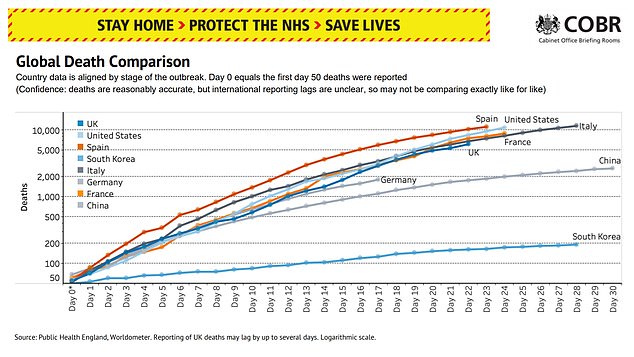 A leaked document from Germany’s interior ministry has already laid out plans for lifting the lockdown, although Angela Merkel says it is too early to set a date.

The country added fewer than 4,000 cases to its coronavirus tally for the second day running today, in the latest promising sign that the peak may have passed.

The 4.0 per cent rise is almost identical to yesterday’s increase, which was the lowest since the crisis began.

The document says restrictions could be eased if the rate of contagion is below 1.0, meaning that each patient is infecting less than one other person on average.

If that is achieved, children could return to school on a regional basis, and restaurants could re-open with a limited number of customers.

Mrs Merkel said restrictions would be lifted step by step, warning that public health would always be the first consideration.

Germany is seemingly able to acquire tests from domestic manufacturers while Britain is having to import them.

Germany is home to a strong network of biotech and pharmaceutical companies, including Landt, which has made and helped distribute four million COVID-19 tests.

Asked what could be learned from Germany, where the rate of growth in the number of deaths was much slower, chief scientific adviser Sir Sir Patrick Vallance said: ‘You’re right, the German curve looks as though it’s lower at the moment, and that is important, and I don’t have a clear answer for you to exactly what it is, the reason for that, and there are obviously two things that one will look at in terms of any response to any outbreak.

At the news conference, Foreign Secretary Dominic Raab, who is standing in for Prime minister Boris Johnson while he remains in intensive care in hospital, insisted the Government’s commitment to reach 100,000 coronavirus tests per day by the end of the month ‘still stands’.

With concerns that antibody tests will not be ready, meaning antigen tests would need to be significantly ramped up, he said: ‘Lots of these things are in very high demand but we are doing everything we can on every front to get all of the testing capabilities we need. 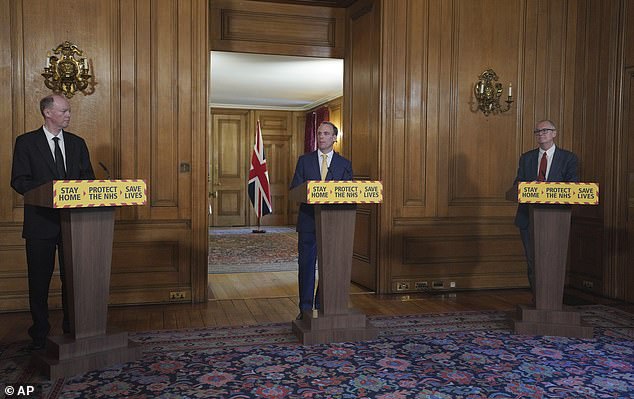 At the news conference, Foreign Secretary Dominic Raab, who is standing in for Prime minister Boris Johnson while he remains in intensive care in hospital, insisted the Government’s commitment to reach 100,000 coronavirus tests per day by the end of the month ‘still stands’

Sir Patrick said following Italy’s death rate trajectory did not mean the UK would end up with the same end result.

He made the comments in response to a question about whether there were any lessons to be learnt given the UK remained three to fours weeks behind Italy’s Covid-19 pattern.

‘This is a pandemic, which means it is everywhere,’ he told the press conference.

‘That is why we are seeing it across many different countries and across all populations.

‘And we are probably three or four weeks behind Italy in terms of the outbreak. It doesn’t mean we end up with the same numbers.

Tags: acted, admits, have, it, should, UK
You may also like
Recent Posts