New York: In a blow to the Trump administration's efforts to open the Arctic National Wildlife Refuge to fossil fuel development, only half of the oil and gas leases offered for sale Wednesday received bids, and all but two of those came from the state of Alaska itself. 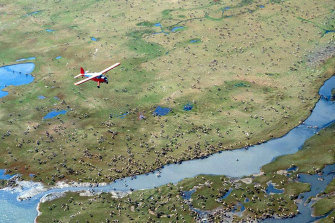 An airplane flies over caribou from the Porcupine caribou herd on the coastal plain of the Arctic National Wildlife Refuge in north-east Alaska.Credit:AP

Only two companies, neither of them a major oil producer, made bids to acquire 10-year rights to explore and drill for oil on two tracts totaling about 30,000 hectares. A state-owned economic development corporation, offering the minimum of $US25 an acre ($80 per hectare), was the sole bidder on the other tracts, totaling about 200,000 hectares. The rights to another 160,000 hectares remained unsold.

Once billed as a potential windfall that, over time, could bring in close to $US1 billion for the federal Treasury, in all the sale netted less than $US15 million, with half of that going to the state.

Both the financial results, and the lack of interest from major companies, are quite likely a disappointment to the Trump administration, and to Alaska officials who have long favoured oil development for the jobs and revenue it could bring.

President Donald Trump made opening part of the 77,000 square kilometre refuge in north-east Alaska a centrepiece of his program for developing more domestic production of fossil fuels.

But the outcome was ridiculed by environmental groups and others who had long opposed it.

The bidding by the state economic development corporation, the Alaska Industrial Development and Export Authority, had been authorised only last week out of concerns that there might be no other bids. The authority's board had given its executive director power to spend up to $US20 million. Its winning bids totalled about $US12 million, but because the state receives half of that back, its outlay will only be about $US6 million.

Of the two other winning bidders, one, Regenerate Alaska, is an affiliate of 88 Energy, an Australian oil company that has an interest in a drilling project on state-owned lands in northern Alaska. It bid successfully for a 9300 hectare tract on the western border of the refuge.

The other winning bidder, Knik Arm Services, was formed a year ago; information about it was not immediately available.

Tags: drilling, leases, of, sale, Trump
You may also like
Recent Posts