Kabul: The United States has accelerated its air campaign against the Taliban in the closing weeks of its military mission in Afghanistan, and the US forces’ top commander says they are prepared to continue if the militants continue their attack.

US forces bombarded Taliban positions in at least four air strikes last week, including in the southern province of Kandahar. Militants have besieged and now control some parts of the provincial capital, along with about half of the country’s district centres, defence officials have said.

In an attempt to halt theTaliaban’s offensive, Afghanistan’s government has imposed a night curfew across most of the country, ordering people home between 10pm and 4am in 31 of the nation’s 34 conference, although Kabul is exempt. 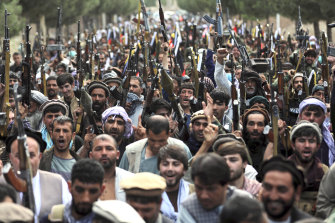 Afghan militiamen join defence and security forces in Kabul during a gathering to mobilise local militias across the country. Credit:AP

Since early May, when the US-led forces began their withdrawal, Taliban fighters have captured dozens of districts, encircled several provincial capitals and taken key border crossings.

Marine General Kenneth “Frank” McKenzie, the head of US Central Command, who assumed responsibility for operations in Afghanistan this month, told reporters that the number of air strikes had increased as the Taliban takes more territory.

“We are prepared to continue this heightened level of support in the coming weeks, if the Taliban continue their attacks” McKenzie said. “We’re taking air strikes as we need to take them.”

Some of the strikes came during “close fighting” between Afghan troops and the Taliban, he said. Defence officials said recent strikes have come at the request of Afghan forces, including to destroy stolen vehicles and artillery.

McKenzie repeated that US air strikes in support of Afghan forces would stop on August 31, when President Joe Biden has said the mission will end and the US withdrawal will be complete. The main focus afterward will be logistical support through contractors, such as maintenance for Afghan aircraft.

But McKenzie stopped short of saying he was certain the US would not strike Taliban targets in support of embattled Afghan troops. There will be a high bar for air strikes after the deadline, he has said: militants planning terrorist attacks on the US or against allies.

“We spent a lot of time training” Afghan forces, McKenzie said. “Now is their moment.”

The US withdrawal is about 95 per cent complete, the Pentagon said last week. About 650 US service members will remain in the country to defend the US embassy and the international airport in Kabul.

As the US presence dwindles, Afghan troops face the spectre of vanishing US intelligence and aerial attack capabilities just as the Taliban continues its territorial push, which has included allegations of mass killings in some areas, including Kandahar province, Human Rights Watch said. 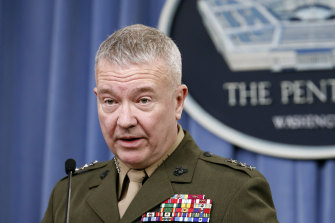 “I’m not going to kid you and say it’s going to be easy,” General Kenneth McKenzie admitted. Credit:AP

McKenzie said he is confident the Afghan Air Force, which has launched numerous air strikes itself, can help reverse the tide. US officials have bet big that the air force created in its image will be a deciding factor against the Taliban and a key advantage against the militants.

But the significant investment in helicopters, attack planes and cargo aircraft means a long tail of logistical support, maintenance needs and training has become more important as US troops and contractors have departed.

Some training is done via remote video. The US will rely on spiriting away battered aircraft to other nations with US bases so contractors can rehab them for the long fight to come.

“I’m not going to kid you and say it’s going to be easy. It will be far more difficult than it was in the past,” McKenzie said. “We will do everything in our power to keep that Air Force effective, flying, and in support of their forces.”

Tags: 'prepared, 'General, says, t, top, Us
You may also like
Recent Posts