Thug, 29, who knocked out officer and beat police dog with plank of wood after being asked if his journey was essential is jailed for four years

A violent thug who knocked out a policewoman and beat a police dog with a plank of wood after being asked if his journey was essential has been jailed for four years.

Nelson Nelson flew into a rage at Nottingham train station on Saturday, April 4 when officers asked him if he needed to be travelling during the coronavirus lockdown.

He then went on a ‘rampage,’ punching three police officers – dragging one into the path of a oncoming bus – and attacking a police dog before finally being arrested.

When the 29-year-old was searched police also found a lock-knife on him.

Nelson pleaded guilty to a string of charges related to the incident earlier this month. 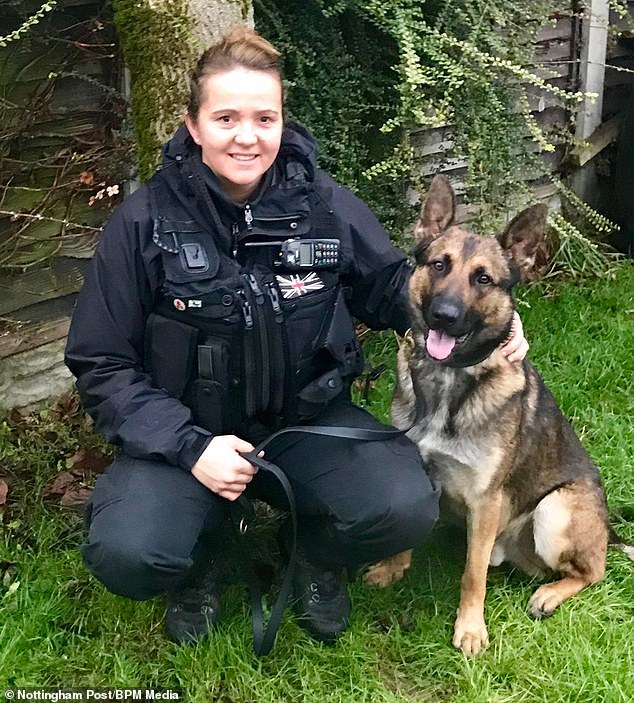 Nelson Nelson, 28, hit police dog Quantum and attacked his handler, PC Jennie Ellse, after being asked if his train journey was essential

After verbally abusing British Transport Police (BTP) officers at Nottingham station, telling them he would ‘knock them out’ he was escorted off the property before punching them both in the face – knocking them both to the ground.

One fell unconscious but the other managed to get up and chase after him.

Nelson dragged him into the road in front of an oncoming bus, before fleeing into a building site opposite the station.

More officers from Nottinghamshire Police, who had been called in to help, found Nelson who then charged at an officer and punched him.

Arming himself with a plank of wood with nails in, he charged at a Nottinghamshire Police dog handler Jennie Ellse and hit police dog Quantum multiple times with the wood, causing a cut to the animal’s chin.

After he was arrested both BTP officers were taken to hospital for treatment.

One was left with severe concussion and bruising to her face, while the other suffered ligament damage to his jaw and thumb, as well as bruising and swelling across his body. 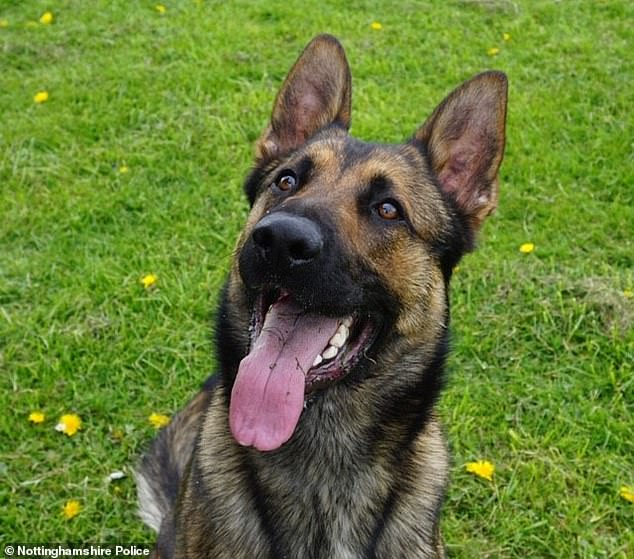 Arming himself with a plank of wood with nails in, he charged at a Nottinghamshire Police dog handler Jennie Ellse and hit police dog Quantum (pictured) multiple times with the wood, causing a cut to the animal’s chin

Nelson of Stonnall Road, Aldridge, appeared at Nottingham Magistrates’ Court earlier this month where he pleaded guilty to two counts of actual bodily harm, assault with intent to resist arrest, assault of an emergency worker, possession of an offensive weapon, possession of a bladed article, and causing unnecessary suffering to a protected animal.

He has now been jailed for four years.

Chief Inspector Gareth Davies said: ‘This was a truly horrifying incident which involved a sustained attack on multiple officers and a police dog, all just trying to do their jobs.

‘There is never an excuse for this sort of behaviour, but it’s all the more shocking to think this violent rampage began after Nelson was simply asked if his journey was essential.

‘Thankfully, no one was more seriously injured, and the officers involved are receiving the support they need.

‘Let me be absolutely clear, we simply will not tolerate aggression or violence towards police officers and we will do everything in our power to ensure offenders like Nelson are brought before the courts to face justice.’

Tags: a, knocked, officer, out, Thug, Who
You may also like
Recent Posts