Spain’s death toll rises 619 in a day to 16,972 as government allows non-essential workers to return tomorrow but rest of lockdown remains in force

Spain’s death toll from coronavirus rose to 16,972 overnight, an increase of 619 on the previous day.

The latest figures announced by the Ministry of Heath bucks the downward trend in daily death rates.

The figures were released this morning amid strict instructions for the millions of workers involve in non-essential industry and construction activities who will be returning to work on Monday and Tuesday after their specific two-week ban is lifted by the Spanish Government.

The Spanish Government paralysed the ‘non-essential’ sectors for a fortnight from March 30 until April 9. 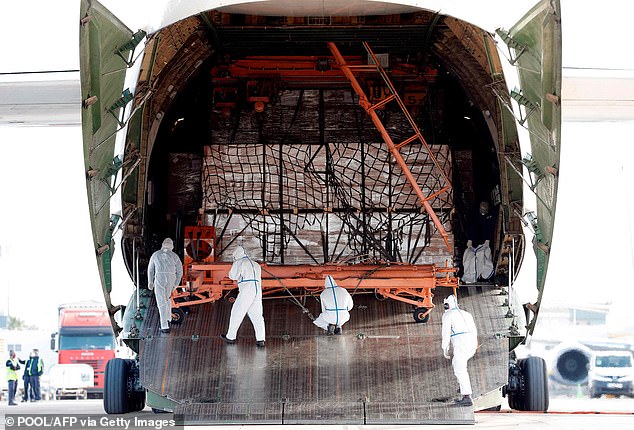 A plane carrying medical equipment to cope with the coronavirus outbreak in the Valencian region, is unloaded at the Manrises airport in Valencia

Now lifted, it means workers involved in these activities and unable to work from home can return to work after the Easter break.

These include workers involved in sanitary, security and telecommunications activities, customs, the supply and distribution of food and basic necessities, and the supply of electrical energy, of products derived from petroleum and natural gas.

They and their companies will have to adhere to strict regulations to make sure they don’t get infected by the virus.

The government has developed a ‘guide of good practices in the workplace’ in which it recommends avoiding, for example, crowding in public transport, disinfecting your mobile phone and glasses when you return home and leaving your shoes at the front door.

The non essential workers are also being advised not to share equipment, wear gloves and masks, keep two metres apart, practice social distancing on public transport, equipment to be regularly disinfected and to follow other extensive sanitary recommendations.

The Spanish Government is stressing that all other businesses, including bars, nightclubs, pubs and restaurants shut under the March 14th State of Emergency, will NOT be allowed to reopen and may have to wait many more weeks to open their doors again.

Bars and restaurants – which can only provide home delivery – discotheques, cultural and leisure facilities, sports venues, amusement parks and auditoriums must remain closed and the ban on festivals, parades, popular festivals and folkloric demonstrations in open spaces and public roads continues.

The State of Emergency runs until April 26th but Spain’s Prime Minister, Pedro Sanchez has already indicated that this will be extended.

On Monday, an army of 35,000 police and Civil Protection workers will start to distribute ten million masks for travellers to use on public transport. They will be provided at train, metro and bus stations. Their use is strongly advised but not compulsory.

‘The distribution of masks is only a support for health protection measures,’ according to Minister of the Interior, Fernando Grande-Marlaska, who has warned that ‘there will be no relaxation of measures after the return to work of the non-essentials, we are still in the confinement phase, and we all have to be clear, we have not started de-escalation.’

He insisted that the return to work of non-essential industries on Monday does not imply a relaxation of the movement limitation measures established in Article 7. of the Royal Decree of the State of Alarm.

Health Minister Salvador Illa has stressed that those who present symptoms, no matter how slight, should not go to work and called for ‘three priorities’ to be followed: keeping a minimum distance of one metre, hand washing and ‘maximum’ hygiene in public and private spaces.