A key worker has won a luxurious six bedroom farmhouse worth a staggering £650,000, after purchasing a £2 raffle ticket.

Lucky Alison Bellamy, 49, scooped a stunning new dream home after her ticket was pulled out of a hat on Thursday afternoon.

The married mum-of-two, from Telford in Shropshire, said: ‘It’s been a total shock because I’d forgotten all about the competition. 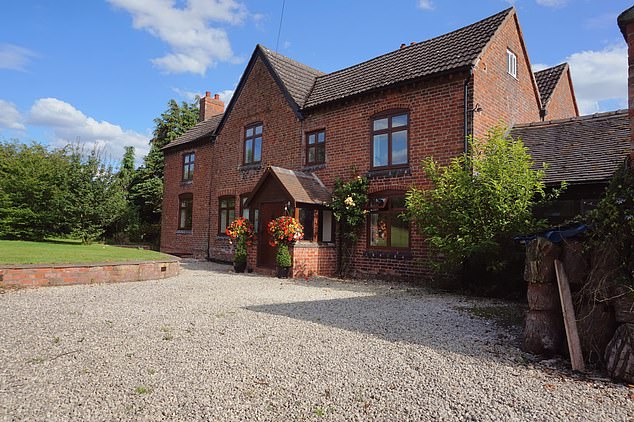 Grafton Farm near Loppington in Shropshire, worth £650,000, has been scooped up by lucky Alison Bellamy after the draw on Thursday 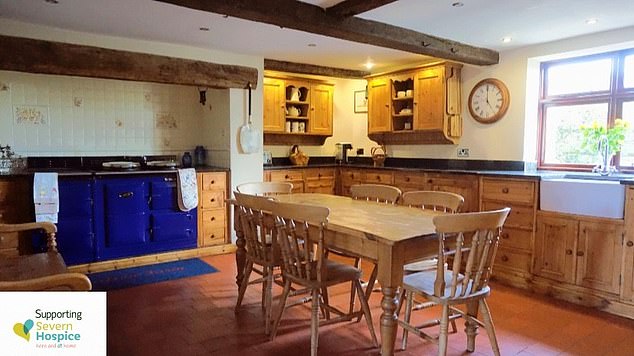 The West Mercia Police worker will win this dream home for just £2, less than the cost of a coffee 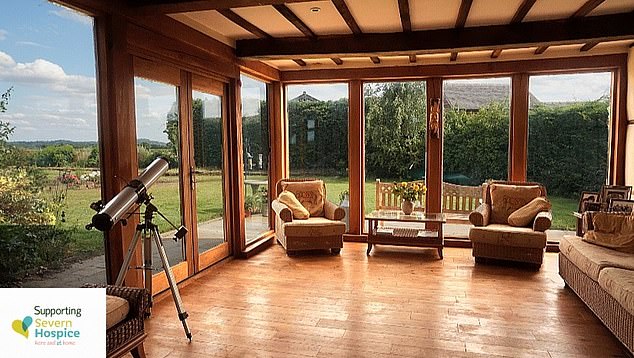 She bags all the furnishings at the Grade-II listed mansion, which is set in three acres of land in Shropshire and includes an outdoor hot tub, gym equipment and a sit-on lawnmower.

The West Mercia Police worker said she was ‘speechless’ after being named the new owner of Grafton Farm in the village of Loppington, and joked that her children had ‘already picked their rooms’.

‘When I entered it I was doing it in memory of a friend who was in Severn Hospice last year. The money was going towards a good cause but I never dreamed that I would ever win.

‘It was a complete shock and it took me a few seconds to process when they said you have entered the competition because I had to remind myself what competition. 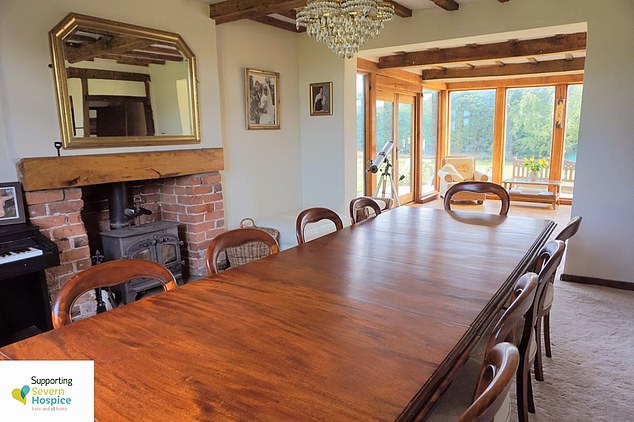 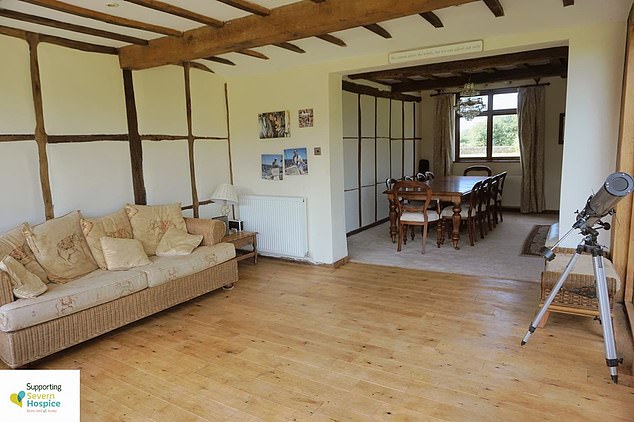 Traditional farm-house beamed ceilings are exposed throughout the £650,000 property 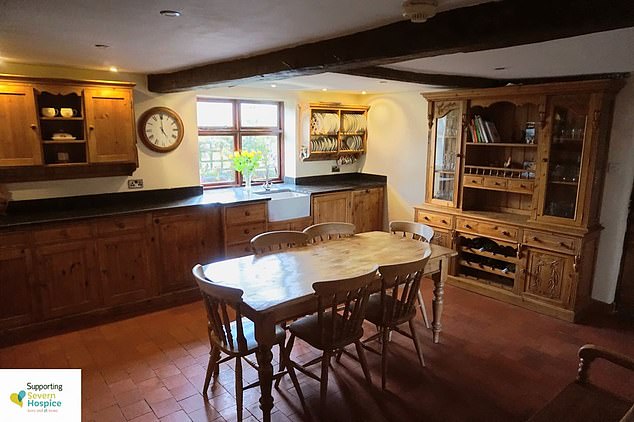 The farm will come fully furnished, including an outdoor hot tub, gym equipment and a sit-on lawn mower

‘I phoned my husband after but he was in a conference so he couldn’t speak to me unless it was urgent so I just messaged him telling him I had won the house.

‘I’m on my way home now to speak to him because we need to obviously have a discussion as to where we go, once we have processed it really.

‘It’s important not to make any rash decisions. This is life-changing for us really, it is massive. There is a lot to discuss.’ 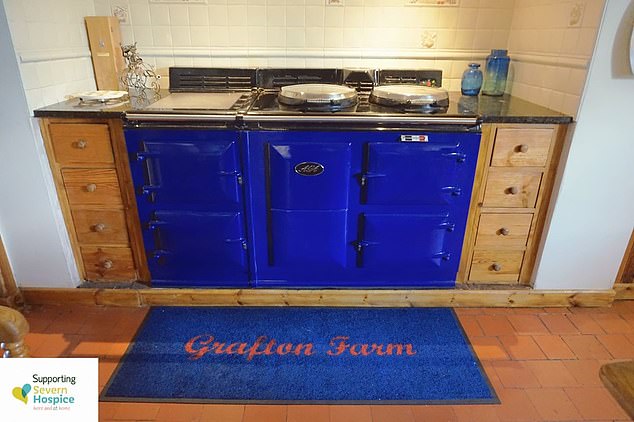 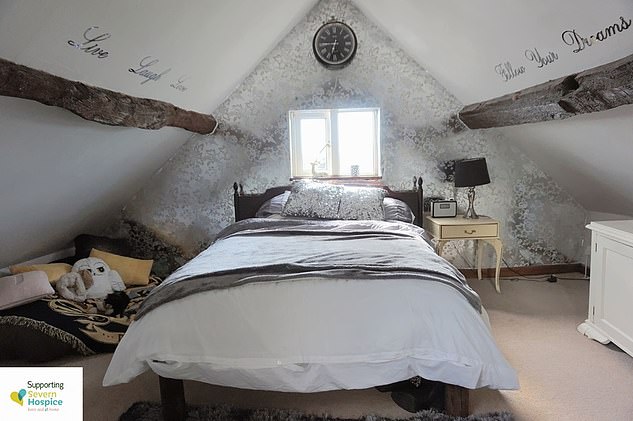 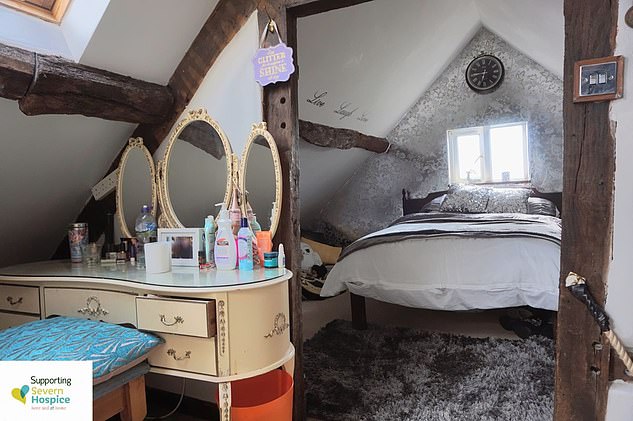 Previous owners Nigel and Jane Chaloner wanted to put their idyllic home up for raffle instead of selling it after deciding to downsize with retirement beckoning.

The couple, who have raised their family and fostered 22 children at their sprawling home over the last 18 years, charged only £2 a ticket to enter the draw.

Together with their two children, Jodie and Sam, the family has raised over £120,000 for the Severn Hospice in the process through 10 per cent of the ticket sales. 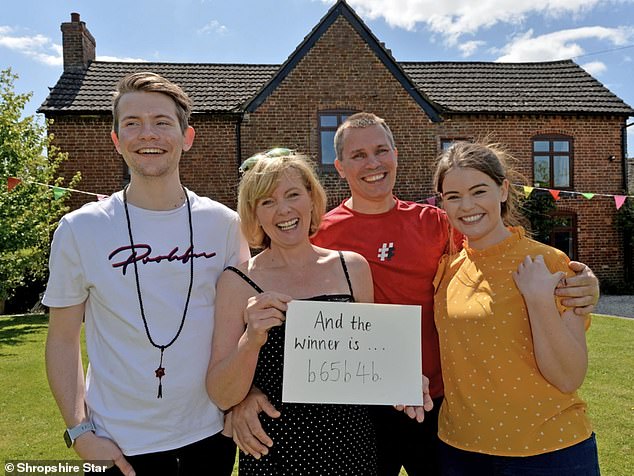 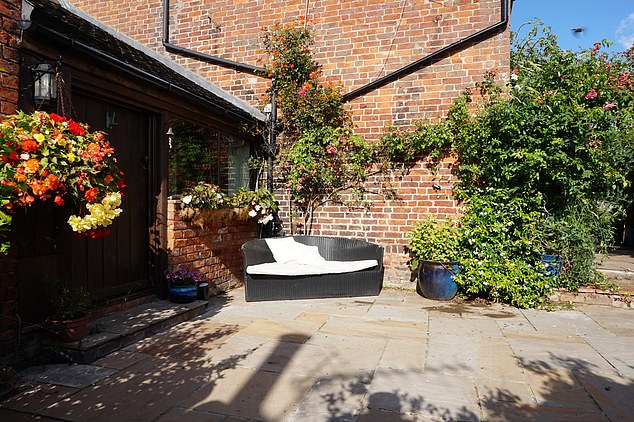 An outside seating area, and Mrs Bellamy will also have a hot tub included in the property

At the draw, which took place in the gardens of the lavish home, Jane said: ‘This will mean the world to a lot of people and the hospice.

‘Everyone has been so gracious and supported each other. This is all about you and everyone that has made this happen.

‘So many have experienced loss and difficulties. There have been a lot of people that have deserved this. 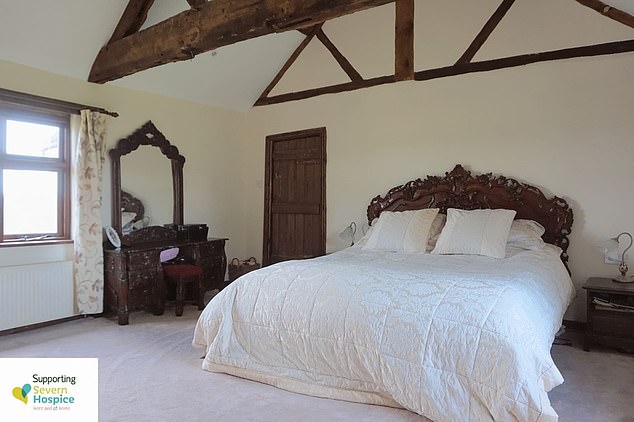 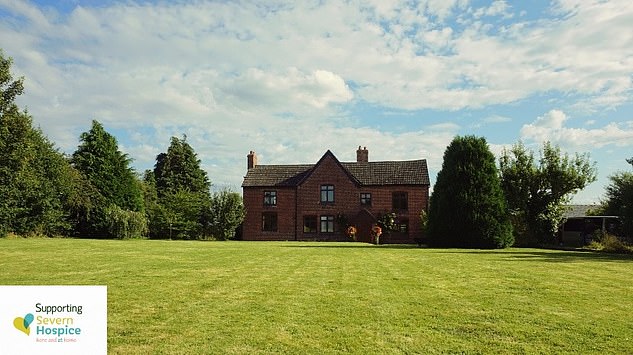 A view of the house from the garden, the detached property offers vast amounts of privacy 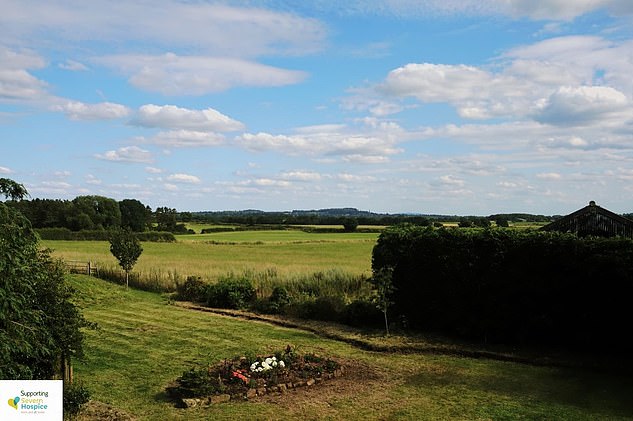 ‘This is a life-changing experience for Alison Bellamy and it will make a difference to so many people. This will mean so much to Severn Hospice. They support thousands of people and they have such a legacy. The difference they make is vast.

‘We want to volunteer abroad but we obviously can’t at the moment. If you will have us at the hospice that will be great.

‘In recent years Severn Hospice has been there for our friends and family at the worst moments in their lives. We know how much Severn Hospice takes the pressure off the NHS.

What are the rules on raffling a home – and what happens if they don’t sell enough tickets?

What is a house raffle and how is it legal?

Raffling off a home is becoming more and more popular with dozens taking place every year in the UK.

For the seller, the idea is to sell enough raffle tickets to cover their asking price – plus cover the cost of running it.

Most set up a website to advertise their competition and charge between £2 and £5 a ticket in order to attract as many entrants as possible – but more expensive properties can be raffled at £25 a ticket.

Once they hit their target total, they then select a lucky winner at random – but the draw must be carried out by a regulated lotto firm not the owner.

Those who want to keep the money gained for themselves must either hold a free prize draw or add a competition element to the raffle.

Competitors should have to prove their skill, knowledge or judgment in order to win the top prize.

Many people get around this by asking an incredibly simple question such as ‘what style of property is this house: A – Victorian, B – Tudor or C – Georgian’ when people pay for their raffle ticket.

Others have run spot the ball games to decide the winner.

How often do house raffles fail?

More and more raffles are failing to hit ticket targets as people become suspicious of them.

In this case the organisers will fall back on their terms and conditions.

These usually allow them to keep 25 per cent of total sales to cover their time.

They can also deduct further reasonable running costs such as legal or PR spending.

The remaining money is then given away – but it is always smaller than the value of the home that was up for sale.

‘In recent years Severn Hospice has been there for our friends and family at the worst moments in their lives. We know how much Severn Hospice takes the pressure off the NHS.

‘In this dire time, we felt we all need some hope and being able to make a difference on this scale makes all the sense in the world.’

Elodie Home, fundraising events manager at Severn Hospice, said: ‘We are enormously grateful to you and your family. Particularly in these difficult times which we are currently in. The donation you have given is vital.’