Britons should get an individual Covid-19 risk score on a scale from one to five to allow healthy youngsters out of the ‘damaging’ lockdown, scientists say

Britons should get an individual Covid-19 risk score on a scale from one to five to allow healthy youngsters out of lockdown, scientists say.

Top experts have flouted the idea of ‘stratified shielding’ to kickstart the economy again and end the lockdown, which they claim is ‘damaging’.

It would involve rating each person’s chances of getting infected and dying from infection based on a number of clear risk factors.

These include age, ethnicity and underlying health conditions, obesity and possibly postcode, considering some locations have suffered worse outbreaks than others.

It could free millions of Britain from a universal lockdown, while protecting the most vulnerable members of society.

But experts who suggested the scheme admitted it would be difficult to implement because the public may find it unacceptable. 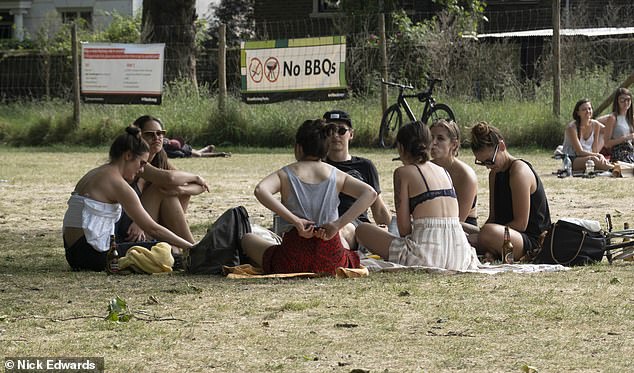 People’s Covid-19 risk should be scored on a scale from one to five to allow healthy youngsters out of ‘damaging’ lockdown, scientists say. Pictured: People in London Fields, May 26

Professor George Davey Smith, of the University of Bristol, wrote his thoughts about stratified shielding in an editorial in the British Medical Journal.

He and Sir David Spiegelhalter, of the University of Cambridge, wrote: ‘Lockdown is seriously damaging many aspects of people’s lives, harming most those with the least resources.

‘As constant vigilance will be required over the coming months and perhaps years, serious consideration should be given to implementing locally informed and implemented strategies to stratify shielding according to risk.’

Several studies have modelled ‘stratify and shield’ strategies, with age being the most viable way to categorise people, the professors said.

A starting point for scoring would be to look at a person’s risk depending on their age, gender, ethnicity, underlying health problems, medication use and obesity.

Postcodes may also be useful to consider. Statistics show people who live in areas with high poverty are more likely to die and hotspots have emerged in the UK over time.

WHO NEEDS TO ‘SHIELD’ UNDER GOVERNMENT GUIDELINES?

Some groups of people are considered to be at extremely high risk of severe illness with coronavirus and should strictly follow shielding measures.

According to NHS Inform, this ‘extremely clinically vulnerable’ group includes people who:

There has been confusion over whether over 70s should be shielding, which means not leaving the house even to do food shopping.

According to Government guidance, over 70s are deemed ‘clinically vulnerable’, regardless of their health condition.

This group also includes anyone who is under 70 but has health conditions including diabetes, high blood pressure, or chronic heart, kidney or liver disease.

These people ‘should take particular care to minimise contact with others outside your household’ but don’t need to shield.

Health Secretary Matt Hancock has previously said in March, however, that over-70s would be asked to ‘shield’ themselves by self-isolating for several months.

He then caused further confusion on May 2, saying there was no ‘blanket ban’ for over 70s and that message is ‘wrong and deeply misleading’.

He incorrectly said that over 70s are not ‘clinically vulnerable’ which they are.

‘A risk score for “getting infected and then dying from the infection” could be constructed from these factors,’ the editorial said.

‘For communication purposes… People could be assigned to one of five categories – for example, from very low to very high risk.

‘Appropriate guidance would be provided for each category, but individuals could opt for a lower or higher category depending on their risk appetite, since legal enforcement would be neither beneficial nor practicable.’

The pair said such a method would not be to ‘frighten’ but allow people to make their own decisions about how to live their lives, rather than everyone being forced to stay at home.

And lifting lockdown for the majority who are low risk would not overwhelm hospitals because it is unlikely those people would get severely sick, they said.

Looking at age alone, one shielding model suggested shielding everyone between age 45 and 75 years old, projected to produce ‘the largest reduction in mortality’.

But this, and other discriminatory lockdowns, are somewhat implausible, Mr Smith and Professor Spiegelhalter said.

It would also be difficult to know when shielding should end, and if it would lead to a sudden wave of deaths.

Ideally shielding of high risk people would end when so many people in the population have had the infection that widespread immunity is achieved – called ‘herd immunity’.

This would force the virus to fizzle out, but only if people who have had the virus previously are definitely protected from getting it again – which is not proven.

The only other way to gain herd immunity is with a vaccine, which is potentially years away.

Experts have warned it’s possible a vaccine will never be found because they often fail in experiments.

Dr Smith said: ‘The virus is unlikely to disappear in the foreseeable future.’

There are millions of people who have been told to shield in the UK because they are ‘extremely clinically vulnerable’.

This group includes people who have specific cancers, severe respiratory conditions or rare diseases that significantly increase the risk of infections, for example.

There is also a ‘clinically vulnerable’ group, which includes over 70s, regardless of their health, and anyone who is under 70 but has health conditions including diabetes, high blood pressure, or chronic heart, kidney or liver disease.

The government doesn’t actually recommend that clinically vulnerable people follow any rules that differ from the universal social distancing guidance.

But these people are being told to follow that guidance carefully, and to take particular care to minimise contact with others outside of their household.

There has previously been confusion over whether over 70s should be shielding, after Health Secretary Matt Hancock said in March that over-70s would be asked to ‘shield’ themselves by self-isolating for several months.