Pandas at a zoo on lockdown in Hong Kong have successfully mated for the first time.

The pandas at Ocean Park Zoo in Hong Kong ‘succeeded in natural mating at around 9am this morning’ for the first time ever, the zoo said in a statement on Monday.

Due to the coronavirus outbreak, Ocean Park had been closed to the public since late January. 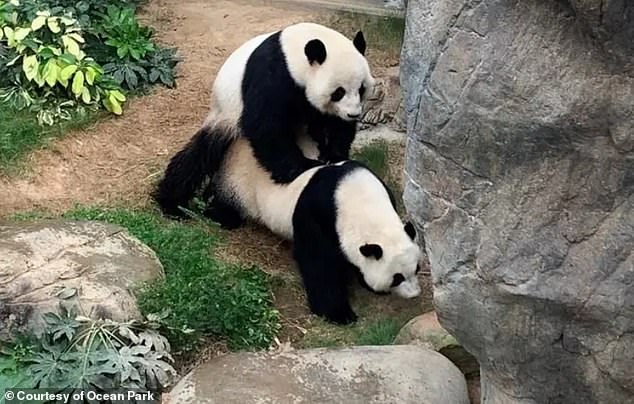 The pandas at Ocean Park Zoo in Hong Kong ‘succeeded in natural mating at around 9am this morning’ for the first time ever, the zoo said in a statement

The two animals, named Le Le and Ying Ying, arrived at the park in 2007 and had not mated since attempts were made to unite the pair in 2010.

Earlier attempts by zoo keepers to bring about natural mating had been fruitless. ‘Since Ying Ying and Le Le’s arrival in Hong Kong in 2007, and attempts at natural mating since 2010, they unfortunately have yet to succeed until this year,’ said Michael Boos, executive director of zoological operation and conservation.

Mr Boos added that the latest development was ‘extremely exciting for all of us’.

‘The successful natural mating process today is extremely exciting for all of us, as the chance of pregnancy via natural mating is higher than by artificial insemination,’ he said. 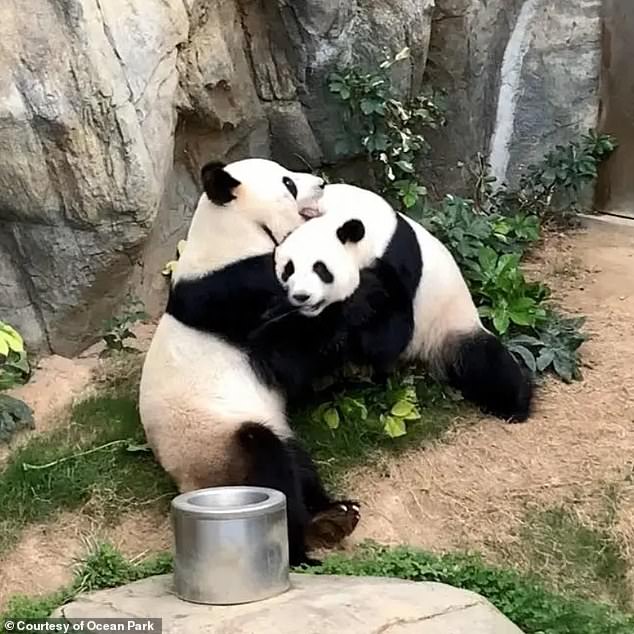 The press statement continued: ‘Since late March, Ying Ying began spending more time playing in the water, while Le Le has been leaving scent-markings around his habitat and searching the area for Ying Ying’s scent.’

Staff are now closely monitoring Ying Ying’s body and behavioral changes to see if she could be pregnant.

Pandas are considered a vulnerable species and there are just 1,864 giant pandas alive in the wild, according to World Wildlife Foundation predictions.

It comes as Whipsnade Zoo in London is hoping for an elephant pregnancy.

Staff at Whipsnade, the UK’s biggest zoo are monitoring its female elephants for signs of pregnancy after their first meeting with recently-arrived male Ming Jung went better than expected.

Ming Jung arrived at Whipsnade from Antwerp, Belgium last year. The 12-year-old has since been introduced to the herd’s females, and keepers said Ming Jung was ‘obviously smitten’.

Elephant pregnancies last about 22 months, according to National Geographic

Tags: first, for, mate, Pandas, The, Time
You may also like
Recent Posts