Police have seized $80.7 million in liquid methamphetamine – the second largest haul of the drug in Victoria – in a shipment of canola oil that arrived at Melbourne’s docks from Mexico.

Hidden among the consignment of 9360 bottles of the oil were 269 bottles found to contain close to 538 kilograms of liquid methamphetamine. 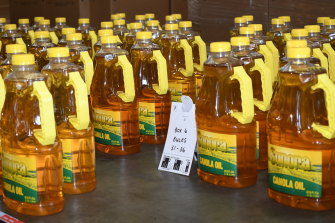 Some of the almost 269 bottles of liquid methamphetamine.Credit:AFP

No arrests have been made.

Detective Acting Superintendent Rebecca Goddard of the Australian Federal Police said the seizure was another example of the extreme lengths organised criminal syndicates will go to in order to import illicit substances into Australia.

“Australian authorities continue to slam the brakes on the movement of illicit drugs across international borders and into our communities,” she said.

“Detectives are now working to trace the criminal syndicates connected to this shipment. 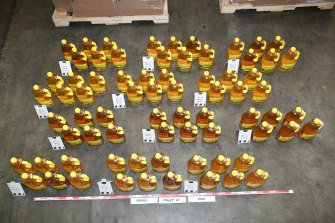 Investigations are under way following the seizure in Melbourne of the liquid meth.Credit:AFP

Australian Border Force officers said they identified the suspicious consignment spread across two shipping containers when it arrived in Victoria on March 31. Federal police officers then seized the shipment

The liquid methamphetamine seizure is the second largest in Victoria, following the federal police-led Operation Zeelandia in November in which more than 560 kilograms of the drug was seized and four alleged members of a transnational criminal syndicate were charged. 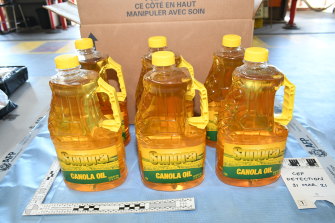 Testing revealed the illicit content of some of the bottles in the shipment.Credit:AFP

“The ABF’s technical expertise and sophisticated technology means that we will find the drugs, regardless of the method of concealment,” he said.

“If criminal organisations have thought of it, chances are, we have seen it.”

Anyone with information relating to the investigation can contact Crime Stoppers on 1800 333 000.

Tags: ain’t, Cook's, Gang, Oils, Up
You may also like
Recent Posts