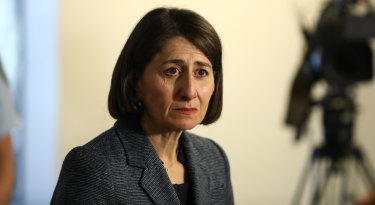 NSW Chief Health Officer Kerry Chant said the woman was in isolation when she tested positive for the virus. Investigations are ongoing regarding the man.

Masks on Sydney public transport, which were made mandatory in Sydney on Friday, will now also be required in Shellharbour and Wollongong until Thursday.

People in seven local government areas – Randwick, Bayside, Botany Bay, Inner West, City of Sydney, Waverley and Woollahra – will now also have to wear masks indoors, including in retail settings, unless they are eating or drinking.

There was also one new local case confirmed in Queensland on Sunday in a cabin crew member who tested positive after completing 14 days of hotel quarantine.

The woman is believed to have been on the same international flight as a previously confirmed case.

Queensland’s Premier Annastasia Palaszczuk said: “I don’t want the community to be alarmed at this stage because the woman was only out in the community for a short period of time … she had just finished her 14 days of hotel quarantine and tested positive after she left quarantine.”

In NSW, there are now a total of eight cases associated with the eastern suburbs cluster.

The initial case in NSW was a driver in his 60s who interacted with international air crew.

NSW Premier Gladys Berejiklian said there were 24,000 tests conducted on Saturday but urged more people to come forward for testing.

Health authorities have urged people who were in the vicinity of confirmed COVID-19 cases, including Westfield Bondi Junction on Saturday 12 June and Sunday 13 June, to get a COVID-19 test even if they do not have symptoms.

However, people without symptoms who have not been classified as casual contacts have not been asked to self-isolate, even while waiting for test results.

“People who do not have symptoms do not need to isolate, but until they return a negative test are strongly urged to wear a mask in all public indoor spaces, avoid gatherings and minimise their movements, particularly attending the cinemas or trips to the ski fields,” NSW Health said on Saturday.

People who attended the same specific venues or were on the same public transport services as cases are being asked to immediately get tested and isolate until they receive a negative result.

There were no new local cases reported in Victoria on Sunday, following one new case on Saturday and one on Friday.

Victoria’s lockdown measures were further eased on Friday, including a scrapping of the 25 kilometre radius for travel for Melburnians and an increase in the maximum number of people allowed at public gatherings from 10 to 20 in Melbourne and from 20 to 50 in regional Victoria.