Washington: The number of new coronavirus cases around the globe has almost doubled over the past two months, an alarming increase that the World Health Organisation said on Friday (Saturday) was nearing the pandemic’s peak infection rate.

Around the world, “COVID-19 cases and deaths are continuing to increase at worrying rates,” WHO chief Tedros Adhanom Ghebreyesus said at a briefing on Friday. 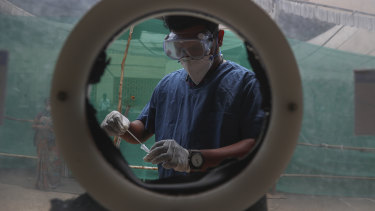 “This is approaching the highest rate of infection that we have seen so far during the pandemic,” he said. “Some countries that had previously avoided widespread COVID-19 transmission are now seeing steep increases in infections.”

Case numbers have spiked in nearly all regions, with larger outbreaks gripping Brazil, India, Poland, Turkey and some other countries. In the seven days ending April 11, global cases rose by 11 per cent compared to the previous week, according to the WHO.

Some of those infections were due to the spread of new variants, while other surges came as pandemic fatigue set in and authorities moved to relax restrictions.

Scientists are also worried about the arrival of the new variant from India, which has a double mutation in the spike protein that may make it more able to evade the body’s immune responses. It currently has the label of “variant under investigation” but could be designated a “variant of concern” if it found to be more infectious or resistant to vaccines. 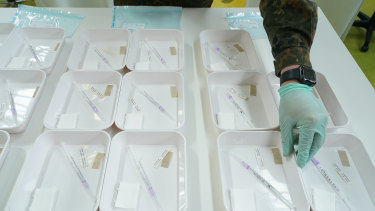 A member of the German army assists in preparing trays of syringes filled with the Pfizer/BioNTech vaccine against COVID-19 at the Arena Berlin mass vaccination centre. Credit:Getty

Paul Hunter, professor in medicine at the University of East Anglia, said it features two mutations – E484Q and L452R – which “are causing people to be concerned”.

“There’s laboratory evidence that both of these are escape mutations,” he explained.

“Basically, applying what we know about other human coronaviruses would suggest that this is going to be even less controlled by vaccine. But we don’t know that for certain at the moment.”

The rise in cases comes as vaccines rollouts continue globally, with some countries hoping to counteract the surge with inoculations and others facing serious vaccine shortages that could make such efforts impossible.

Indian officials said on Thursday that more than 200,000 new cases had been confirmed in the last 24 hours alone.

The government has ordered temporary hospitals to be set up in hotels and banquet halls in order to cope with an onslaught of cases.

In Mumbai, authorities implemented a strict set of temporary rules this week, closing most businesses.

The case count in India is significantly higher than it was during the country’s last devastating surge in September.

Many measures were relaxed last year as cases started to dwindle. But cases began to steadily increase earlier this year and the latest case levels are wreaking havoc on the country’s health system.

Home to 1.4 billion people, India is a crucial global supplier of vaccines but health workers in some parts of the country claim to now be facing a shortage at home. Thus far, more than 110 million doses have been administered in the country.

In Brazil, where more than 13.7 million cases have been confirmed since last year, doctors were urgently requesting supplies this week as they faced a shortage of sedatives critical to the intubation process for severely ill patients.

More than 365,000 people have died after falling sick in Brazil, where a highly contagious variant is spreading quickly and overwhelming the health system.

Médecins Sans Frontières has called the situation as a “humanitarian catastrophe,” driven by what the organisation described as the government’s inadequate, politicised response to the crisis.

Turkey confirmed record single-day case numbers this week, with the number of new cases confirmed in a 24-hour period surpassing 60,000.

Meanwhile, Poland’s health minister told a radio program Friday that the country is experiencing a “downward” trend in cases after reporting around 35,000 cases in a single day earlier this month. The country implemented serious restrictions last month, shutting down many businesses including shopping malls and cinemas.