The judge overseeing the defamation action brought by Victoria Cross recipient Ben Roberts-Smith over war crimes allegations said he was inclined not to allow live streaming of the trial to prevent the inadvertent disclosure of national security information.

Justice Anthony Besanko told parties to the trial, which is due to commence in the Federal Court on Monday, that he was concerned sensitive material could find its way into the public domain if it was live streamed, even though the Commonwealth had indicated it was not opposed and the parties are in favour of live streaming. 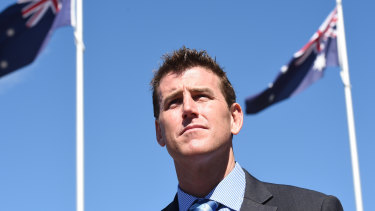 Ben Roberts-Smith launched defamation action against The Age and The Sydney Morning Herald in 2018.Credit:AAP

“But that risk seems to me to be one that needs to be taken into account,” Justice Besanko said.

Mr Roberts-Smith, a decorated war veteran, is suing The Age, The Sydney Morning Herald, The Canberra Times and three journalists over a series of articles about his 2009 to 2012 tour of Afghanistan that he says portrayed him as a murderer, war criminal and perpetrator of domestic violence. The publications are relying on a truth defence.

Whether or not the trial is live streamed, the Sydney courtroom will be open to the public. Justice Besanko said alternatives to the live stream included a delayed recording stream or a recording that was published subject to appropriate editing.

The trial is expected to run for 10 weeks, with both sides calling multiple SAS soldiers. Justice Besanko was told at an interlocutory hearing on Wednesday morning that the cross-examination of witnesses was expected to take weeks.

The court may also need to rely on an interpreter based in Canada to overcome the difficulty in obtaining a qualified local interpreter for the Afghan witnesses.

Last week the media outlets dropped one element of their truth defence, related to the alleged killing of an unarmed Afghan, constituting murder, but they are seeking to prove that Mr Roberts-Smith killed that unarmed man and six other murders.

Mr Roberts-Smith’s barrister, Matthew Richardson, said he would seek aggravated damages in relation to the claim about the unarmed Afghan due to the lack of fundamental evidence for it.

The court also heard that the publications’ legal representatives had still not been granted access to material contained on USB sticks that were relevant to the trial, including photographs of soldiers drinking from a prosthetic leg which belonged to a man alleged to have been unlawfully killed.

A previous hearing heard that Mr Roberts-Smith had condensed the material onto one USB and transferred it to his laptop, which he subsequently wiped.

Mr Richardson said the publications had access to those documents anyway because the USBs had been provided to them by Mr Roberts-Smith’s ex-wife.

But Lyndelle Barnett, acting for the newspapers, said that only one of her clients had possession of the material and he was prevented from giving it to his lawyers under National Security Information legislation.

“We don’t have the material on the USBs and … my client did not receive them from the applicant’s ex-wife,” Ms Barnett said.