Mother, 39, accused of coughing in face of B&M store security guard claiming she had coronavirus when she was ‘caught shoplifting’ is remanded in custody

A mother has been accused of coughing in the face of a B&M store security guard after telling him she had coronavirus.

Leanne Stapleton, 39, was arrested on March 27th during lockdown after she was allegedly caught shoplifting in the bargain store.

Prosecutors say that in order to try to get away Stapleton deliberately coughed at the guard at the store in Dundas Arcade, Middlesbrough, North Yorkshire.

She has appeared before Teesside magistrates where she was remanded in custody by District Judge Helen Cousins. 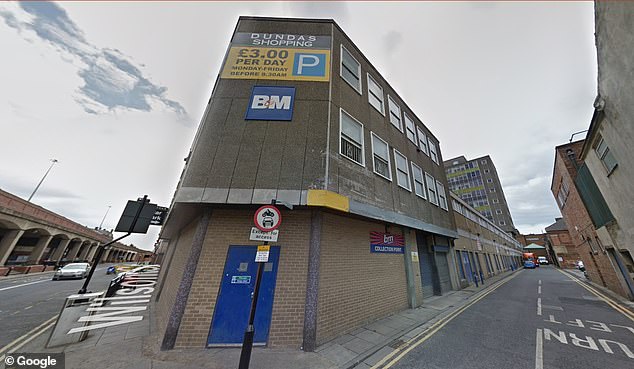 Leanne Stapleton, 39, was arrested on March 27th during lockdown after she was allegedly caught shoplifting in the bargain store (pictured)

Stapleton did not enter a plea and will appear before the court again on Thursday April 2nd via videolink from prison.

The defendant, of Londonderry Road, Stockton, has been charged with theft and common assault by deliberately coughing in the guard’s face.

The charges come after the director of public prosecutions said last week that people who deliberately coughed at police officers and emergency services while claiming to have coronavirus could face up to two years in jail.

Middlesbrough Mayor Andy Preston, though not commenting on Stapleton’s case, has called for tough sanctions for those caught carrying out ‘coughing assaults.’

He said: ‘The situation we face right now is so serious that serious trouble-makers – especially those involved in disgusting assaults like this – need to be dealt with much harder than normal.

‘Anyone doing horrific acts like this should be locked up straight away for the protection of everyone else.’

Over the weekend Cleveland Police issued eight fixed penalty notices to people roaming around during lockdown.

Community Safety Chief Inspector Scott Cowie reiterated the message that people must adhere to the new regulations in order to protect the NHS and save lives.

He said: ‘Whilst we now have the powers to enforce protection in order to help save lives and protect our NHS, policing by consent is at the heart of our public service.

‘We will continue to encourage and support our communities to comply with the restrictions, but it’s right that our officers are now able to enforce against those who disregard these measures and put others at risk.

‘We are urging people to adhere to the government’s guidelines and not to make unnecessary journeys. Where people are going out to exercise, they should do this in the local vicinity of their home and not travel across the county.’

Tags: 39, accused, coughin, Mother, of
You may also like
Recent Posts