Cheryl Cole’s great-grandfather’s heroic First World War exploits are amongst the millions of digital records by the National Archives that will be made free to access for Britons amid the coronavirus lockdown.

Alongside the diary of Joseph Wilson Ridley, who was part of Durham Light Infantry’s 11th Battalion, archives also include the Earl of Stafford’s 1699 will, which sheds light on his car-crash marriage.

The records will allow anyone looking to occupy themselves during self-isolation the opportunity to unlock their family history through wills (1384-1858), war diaries (1914-1922) and British Army medal index cards (1914-1920). 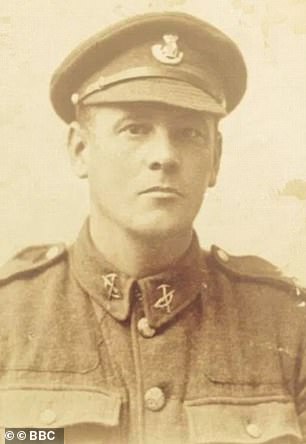 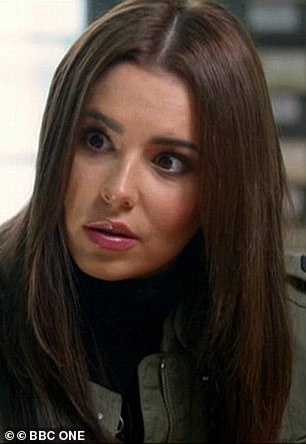 Joseph Wilson Ridley (left), Cheryl Cole’s great-grandfather who was part of Durham Light Infantry’s 11th Battalion, and Cheryl (right) on the documentary ‘Who Do You Think You Are?’ 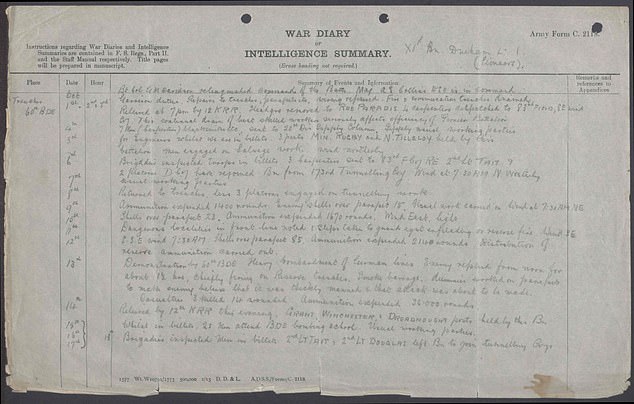 The diary of Durham Light Infantry’s 11th Battalion (Pioneers), which Mr Ridley was part of. The National Archives will make millions of records free to access for Britons online

According to The Times, Mr Ridley, a former grocer, wrote in his war diary: ‘Draft of 52 men arrived, only three of these men were suitable for Pioneer Battalion.

‘Grocers, agents, musicians etc are not fitted for the hard work of pioneering.’

The Pioneer Battalion was formed to provide the Royal Engineers, a military force unit, with skilled labour and to help take the pressure off the infantry.

The records also reveal that the Earl of Stafford wrote in his will: ‘I give to the worst of women except being a whore who is guilty of all ills, the daughter of Mr Gramont, a Frenchman, who I have unfortunately married, five and forty brass halfpence which will buy her a pullet for her supper.’

Meanwhile the 1683 will of John Twisleton, an ancestor of actors Ralph and Joseph Fiennes, gives an insight into his relationship with daughter Cecil.

He reveals his reason behind disinheriting her, describing Cecil as ‘very disobedient’ for marrying without his approval.

National Archives said everyone will be able to access the digitised collections, which are available on their website and usually cost a fee, ‘very soon’.

On Wednesday, the UK Government’s official publisher tweeted: ‘We’re pleased to confirm that we will be giving everyone free access to our digitised collections very soon, but it’s taking our amazing digital team a bit of time to make it happen.’ 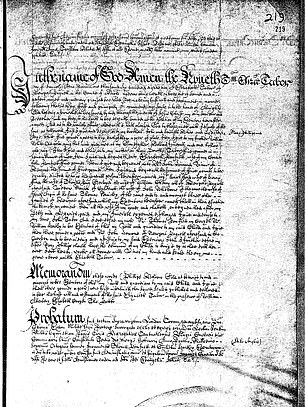 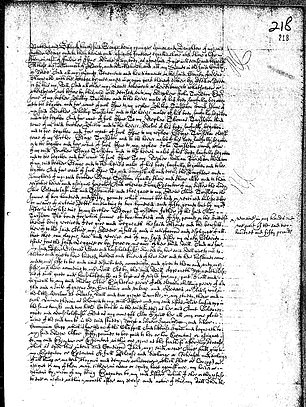 The 1683 will of John Twisleton (pictured), an ancestor of actors Ralph and Joseph Fiennes, where he reveals the reason for disinheriting his only daughter, Cecil 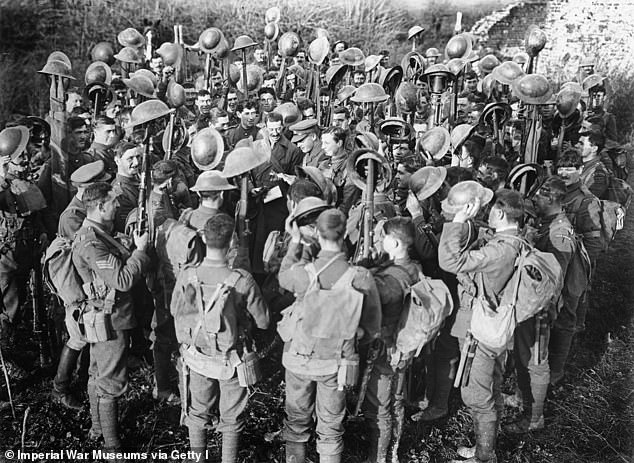 Captain Paget MC and 2nd Lieutenant Barry MC of the 1st Battalion, Irish Guards, read details of the Armistice with Germany to their men in November 1918

They explained: ‘They’re facing similar challenges to the rest of the world with regard to connecting to our various technical systems while working from home, and many of them are also juggling childcare duties.

‘Stay tuned for an update soon!’

Twitter users were thrilled by the announcement, with one writing: ‘This is absolutely ace: you and the teams do brilliant, wonderful work in improving access to knowledge at this difficult time. Super.’ 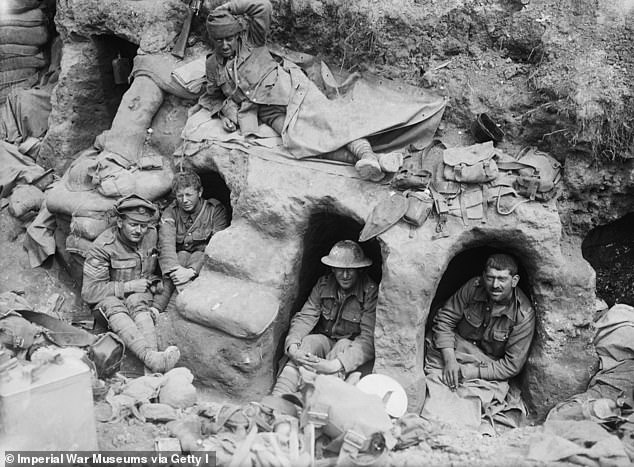 Men of the Border Reiment resting in shallow dugouts near Thiepval Wood during the Battle of the Somme in August 1916, taken from the Ministry of Information WW1 collection 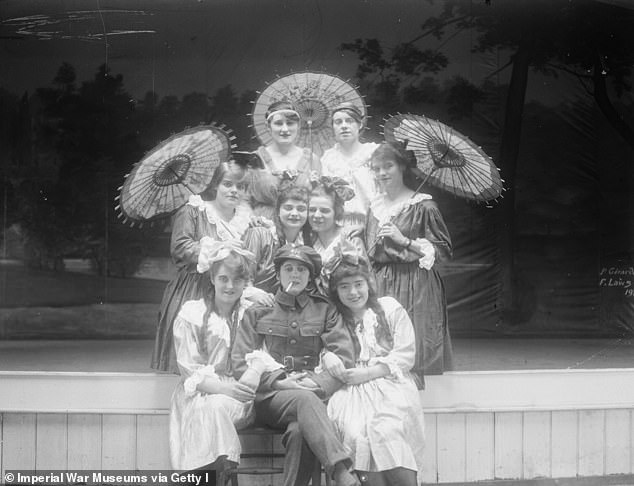 A concert party organised by the Women Carpenters at the W G Tarrant Hut Works near Calais, to give performances to wounded soldiers, on 3 December 1918 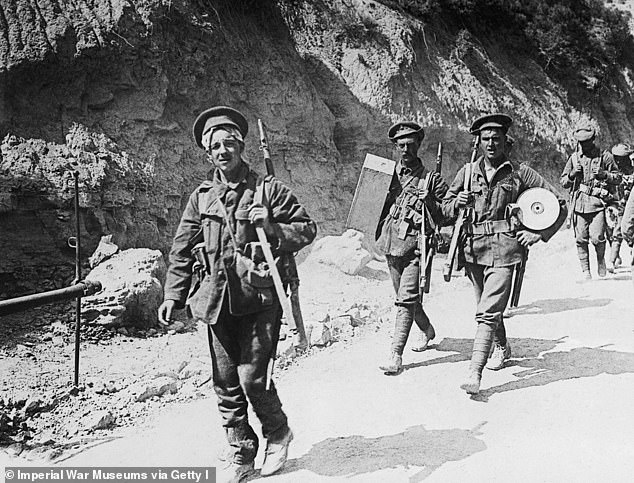 The British Army in Gallipoli, 1915, showing Royal Fusiliers returning from the trenches through Gully Ravine, circa 1915. Taken from the Imperial War Museums collection

A third added: ‘The best news! Was looking forward to visiting during Easter break, until the pandemic changed everything.’

The National Archives in Kew, Surrey, is currently closed to visitors until further notice, during the coronavirus pandemic.

On its website, the public records service states: ‘We are looking at options to run some of our public programming activities online, including events and teacher-led sessions.

‘Some of our online services will also be affected during this period, as they rely on staff having access to our building and collections.’

Over five percent of the National Archive’s most popular records are available online, with digital archives typically costing £3.50 for a document.

Tags: documents, fre, Made, Millions, of
You may also like
Recent Posts