*Warning. This story contains spoilers from the Dec. 8 episode of “Law & Order: SVU.”

Captain Benson is sending an emotional goodbye to Detective Rollins.

Giddish, who played Det. Amanda Rollins, joined the NBC hit in 2011 following the exit of star Christopher Meloni and became one of its longest-tenured cast members in history.

“Kelli, I’ve loved acting, learning, growing, talking, laughing and crying with you,” Hargitay wrote. “I’ve loved watching your achingly beautiful performances. I’ve loved watching our friendship deepen and grow and blossom. I’ve loved every single minute of it, and I will miss you so much. You have my respect, love and gratitude forever.”

Giddish shared a photo of her hugging Hargitay on Instagram with a message of gratitude.

“To everyone who supported Rollins — THANK YOU!” she wrote.

The Dec. 8 episode of Season 24 that depicts Rollins’ farewell includes an emotional scene in which Benson and Rollins drink boxed wine in a hotel room together and Rollins tells Benson she received an offer to become a professor at Fordham University in the Bronx.

The scene comes after Rollins gets married to assistant district attorney Dominick “Sonny” Carisi (Peter Scanavino) in a ceremony at a courthouse. The two became romantically involved in Season 22 after they worked together on the force and Carisi helped Rollins care for her children. The two share a kiss at a wedding for Ice-T’s character Fin that’s ultimately called off. 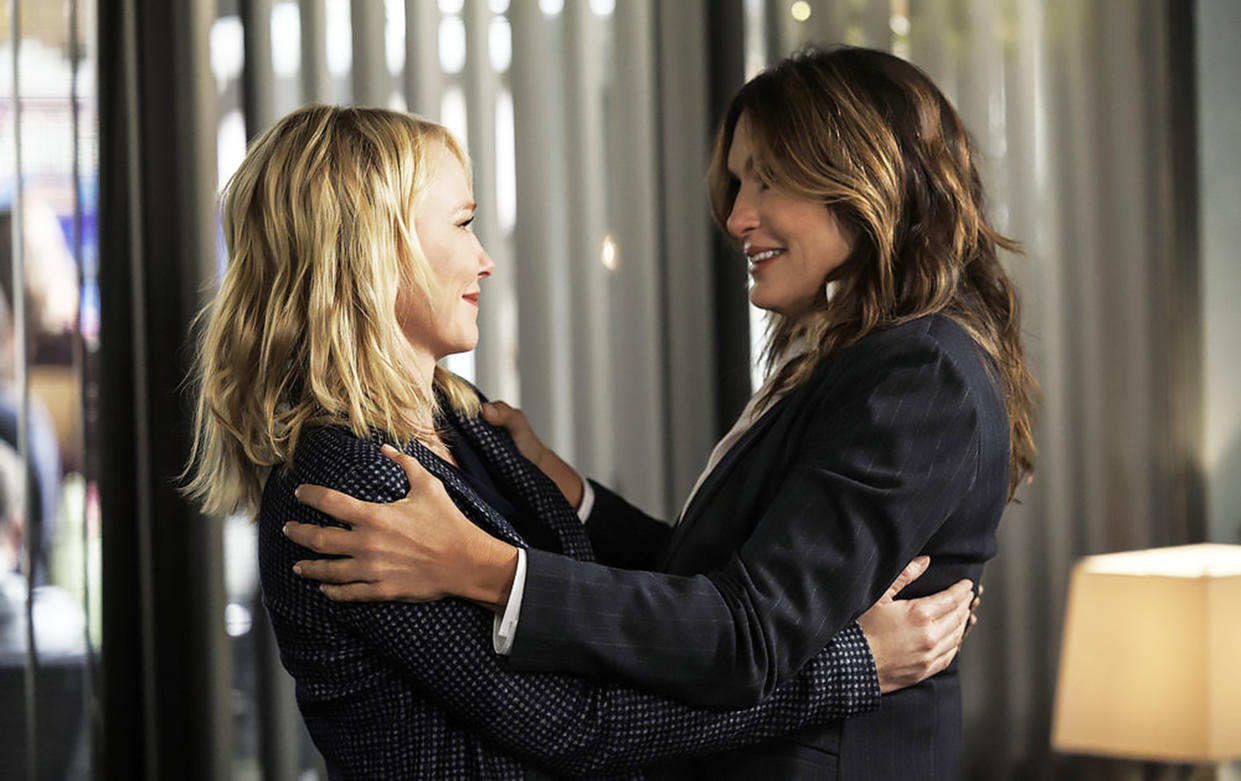 In a previous episode, Carisi had relayed to Rollins how much the brass at Fordham University, where he earned his law degree, was impressed by a recent guest presentation she gave, opening the door for the professor job.

After telling Benson about the job offer, Rollins leaves the hotel room when Benson gets upset. The two then reconcile later, and Rollins promises to stay close with Benson, unlike Det. Elliot Stabler, the character played by Meloni who disappeared for a decade to work in Rome after leaving the NYPD.

The episode ends with the “SVU” squad sending out Rollins with a round of applause as she leaves.

During her time on the show, Giddish has portrayed Rollins dealing with a gambling addiction and abuse in her past, and then as a single mother of two children trying to juggle the stress of the job and her family.

Giddish’s exit was announced in August before the premiere of the current season of “SVU.” Giddish, 42, confirmed on Instagram that she was leaving.

“Playing Rollins has been one of the greatest joys and privileges of my life,” she wrote. “I’ve been so fortunate to be a part of the ‘Law & Order’ family for the last 12 years. There is simply no other character on TV like Rollins. She’s grown and changed, and I have as well. I started on this show when I was in my late 20s and I’m grateful I got to spend so many of my adult years with Rollins in my life.”

This article was originally published on TODAY.com