Los Angeles city leaders approved an ordinance Tuesday that would bar protests within 300 feet of the residence belonging to the person being targeted, a move that came following months of demonstrations outside the homes of public and elected officials.

The City Council voted 12 to 2 to approve the measure, with council members Mike Bonin and Nithya Raman dissenting. A second reading — usually a formality — will be held Sept. 21 for the ordinance to go into effect. 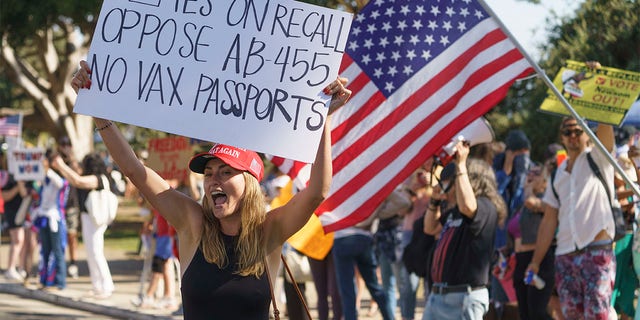 Demonstrator Angelita Roman rallies against COVID-19 vaccines and passport mandates in Santa Monica, Calif., on Aug. 29, 2021. The City Council on Tuesday voted to approve an ordinance that would bar protests within 300 feet of a target’s home.
(AP Photo/Damian Dovarganes)

The ordinance was requested by Council President Nury Martinez and Councilman Mitch O’Farrell, who were the targets of anti-vaccine protesters last month. On Aug. 29, a protester at a Santa Monica rally shared their home addresses and encouraged people to show up at the residences if they voted to approve an ordinance requiring partial proof of vaccination before being able to enter most indoor spaces.

“We have one week to stop the (vaccination) passports … if it’s unanimous, we’ve lost,” a protester said. “Sharpen your knives, get your guns, get your food now. We find out who voted yes and you show up at their house. We need to intimidate these people.”

“No staffers, no family members of ours should be subjected to this kind of treatment. My address and my home is not a public place for you to come and protest,” she added.

After the rally, protesters, including gubernatorial recall candidate David Alexander Bramante, showed up at the homes of the Martinez and O’Farrell.

“I had a group of folks show up at my doorstep, banging on my door, banging on my windows, harassing my neighbors, screaming obscenities into my daughter’s bedroom and yelling into bullhorns asking me to come out and threatening my life,” Martinez said, according to City News Service. “Members, quite frankly, I’m done with the entire thing. I’m done with the threats … I am prepared to put an end to this.”

Several members of the public called to voice opposition to the measure, calling it a violation of their First Amendment rights. Some said they would sue the city if the ordinance takes effect. A draft ordinance said anyone found to be in violation could be sued for damages and face up to $1,000 in fines.

Tags: Angeles’:, At, Bars, H, los, protests
You may also like
Recent Posts