The nemesis of evil: Leonard ‘Nipper’ Read, who has died aged 95, was so short he had to fib to join the police. But with giant courage (and a variety of cunning disguises) he was the detective who brought down the Kray twins

There were plenty of reasons why the late Leonard ‘Nipper’ Read should not have become the greatest policeman of Britain’s post-war period – the man who not only jailed the notorious Kray twins, in part thanks to a cunning disguise as a vicar, but played a key role in tracking down the 1963 Great Train Robbers.

For starters, he was tiny, hence the nickname. Barely 5ft 7in, he failed the entrance criteria for Nottingham Police force where applicants had to be at least 6ft and, by his own admission, didn’t really fit the bill.

‘I was very small and very thin and didn’t look anything like a policeman should,’ he once said. Which made him perfect for undercover work and well suited to disguises. (In the pursuit of justice, as well as posing as a vicar Nipper passed himself off as a painter and decorator, GPO lineman, racing cyclist, chauffeur, road sweeper, milkman and delivery boy – and no one ever suspected.)

But today the worlds of policing and boxing – he was a keen amateur and went on to become chairman of the British Board of Boxing Control – are in mourning for the man immortalised as ‘Nipper of the Yard’, who died on Tuesday aged 95.

He is one of the most high-profile victims of the coronavirus, which he caught in hospital where he was being treated for a foot infection, according to a family member. It was a sad end for a man who had been a fighter all his life. He only squeezed into the Metropolitan Police by assuring selectors he was still growing (at the age of 22) and promising to perform daily ‘stretching’ exercises. 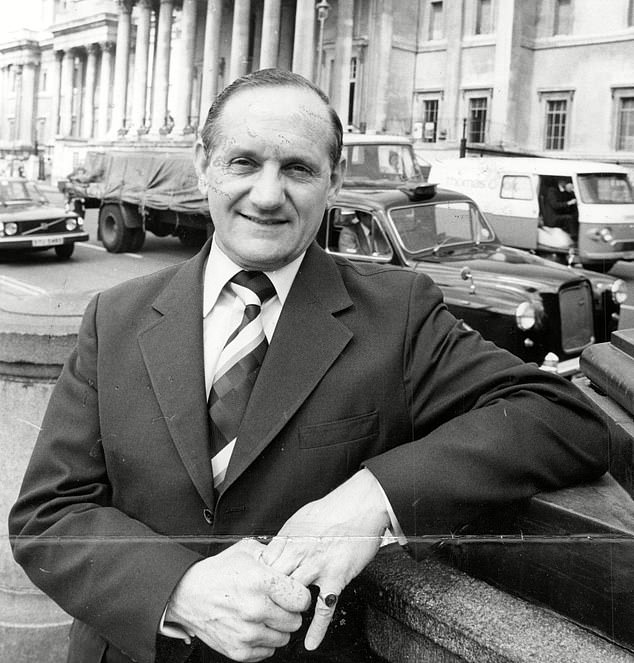 Even aside from his diminutive size, he didn’t really blend in. Compared to the rough, tough, boozy world of Scotland Yard, Nipper was neat, precise, modest and obstinately unclubbable – both within the force and with gangland criminals, who were oh-so-good at bribing officers to look the other way.

He was also an epileptic – something he didn’t discover formally until later in life, but which would have scuppered his career in an instant, had he known.

And, as a prominent figure on the Kray twins’ hit list, he was lucky to make it through the latter half of the Sixties alive. But none of that could deter this small, driven, exceptionally dogged man from pursuing his prey and pulling off the biggest criminal coup for decades.

The chase began in 1964, outside the Grave Maurice – the pub in Whitechapel frequented by the Krays – where Nipper had his first sighting of murderous and mentally unstable Ronnie.

‘There was a big American car and a guy stepped out with his hand in his pocket as though he had a gun there and sort of swept the street, then gave a signal and the back door opened and out stepped Ronnie Kray,’ he recalled.

‘He was dressed like a 1930s Chicago gangster. His hair was greased and parted and he wore his glasses. He looked like Al Capone without his fedora.’ 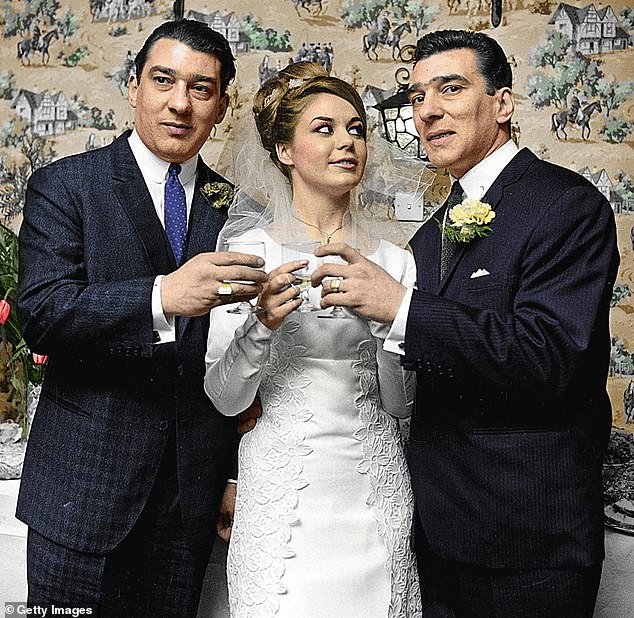 Frances Shae (centre) toasting with the Kray twins, after her marriage to Reggie Kray (right)

From that moment, his path was set. For many, the twins – who had started out with a protection racket in the 1950s in their native East End, but marched relentlessly West – possessed an inexplicable glamour and mystique.

Some of the pre-eminent celebrities of the era were sucked into their orbit. They hung out with Barbara Windsor, Frank Sinatra, Tony Bennett and Judy Garland. David Bailey repeatedly took their portrait, for goodness sake.

And, of course, they paid off the police. But not Nipper.

To him they were the scum of the earth – ‘wicked, unscrupulous, murdering villains’. Of course they were. They terrorised, tortured and terrified people. And they loved it. Soon after shooting and killing George Cornell, a member of the rival Richardson gang, at the Blind Beggar pub in Whitechapel in 1966, Ronnie wrote in a magazine: ‘I felt f***ing marvellous. I have never felt so good, so bloody alive, before or since.’

The following year, Reggie stabbed Jack ‘The Hat’ McVitie, a member of their own gang, at a flat in Stoke Newington. Finally, Scotland Yard had had enough and Nipper, recently promoted to detective chief superintendent, was tasked by the assistant commissioner to: ‘Get the Krays’. 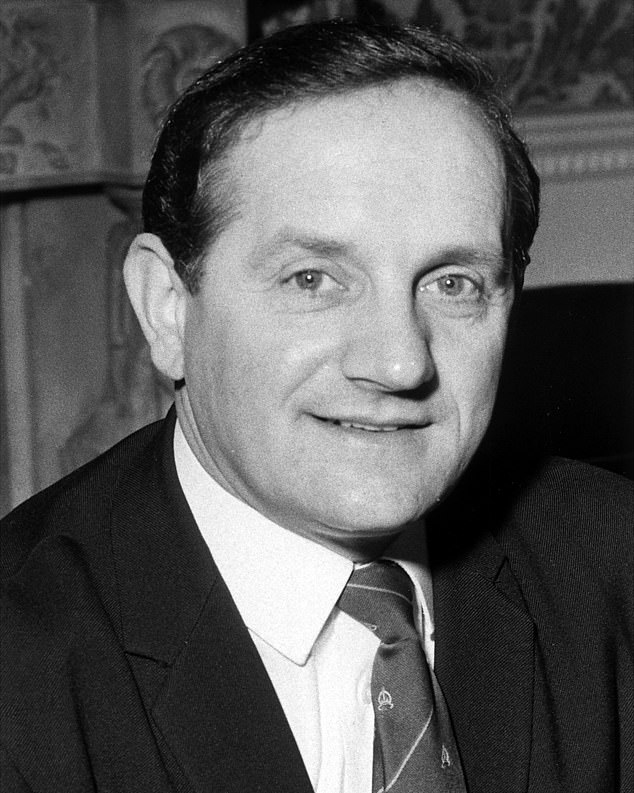 Get them he did, in less than two years. And he went about it with unerring precision. First, he set up a secret satellite investigation office in Tintagel House on the South Bank with ten specialists, including two women – one of whom, Pat Allen, he married in 1970 after his first marriage broke down.

Ostensibly, this ‘special squad’ was involved in security in Northern Ireland but, inside, briefing room walls were plastered with mug shots of gangsters Freddie Foreman, Frankie Fraser, Albert Donoghue, Eddie Richardson among many others.

Discovering a staggering lack of coordinated intelligence on the twins’ grotesque activities, Nipper compiled a dossier of 32 of the Krays’ former associates in a little black book, which he nicknamed his ‘delightful index’.

He and his team visited nightclubs, restaurants and bookmakers, tracking down the Krays’ former associates, making contact and trying to persuade them to talk.

However careful Nipper was, the Krays were all-knowing.

Ronnie referred to him as ‘the cunning little bastard’ who was the only man who might actually catch them and, despite a constant security presence for Nipper, his wife Marion and daughter, Maralyn, a hired gunman was caught at Shannon airport on his way to kill him. Meanwhile, Ronnie bought a boa constrictor from Harrods, called it Mr Read in his enemy’s honour, and  fed it live mice.

All the while, Nipper plugged away – researching, plotting and planning. Well aware that his stature would never allow him to intimidate a witness, he used quiet persuasion instead. On his staff, his seniors, but most of all, the terrified witnesses.

‘From the beginning of that investigation I realised that getting hold of people and shaking them wasn’t the way,’ he once said. ‘There was police corruption in those days and I needed to gain people’s confidence and get them to believe they could trust me. That was largely where my success came from.’

He knew what he was doing and, somehow, chiselled through the wall of silence. In May 1968, the Krays were dragged out of their beds and arrested during a dawn raid at their doting mother Violet’s home. 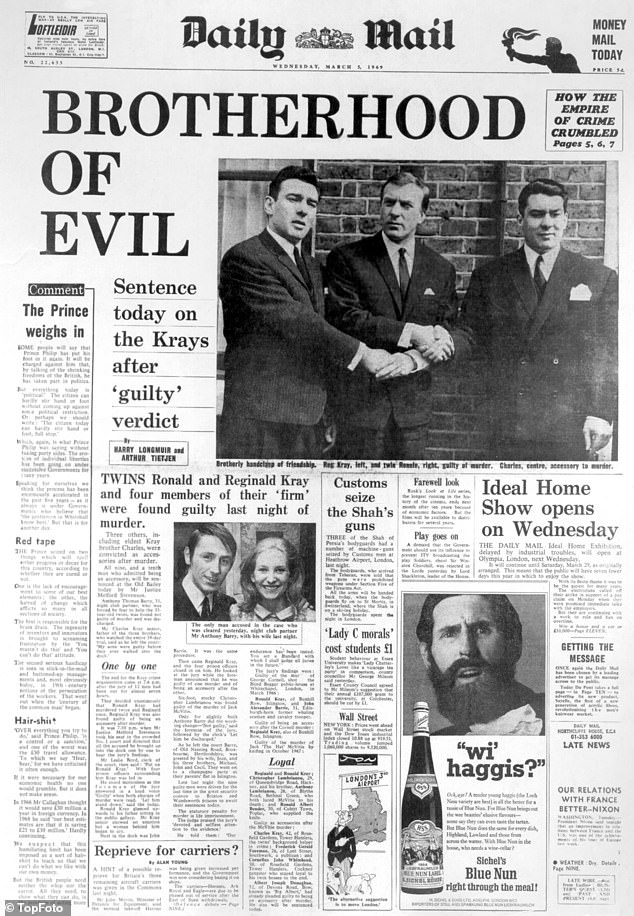 ARCHIVE: Daily Mail front page ‘Brotherhood of Evil’ from March 1969 after their conviction

The following year, thanks to witness testimonies, both were sentenced to life for killing Cornell and McVitie, with a minimum 30 years – the longest murder sentences ever handed down at the Old Bailey. Born in 1925 in Nottingham, Leonard Read endured a dismal childhood.

His mother Ida died when he was just four and, unable to cope, his father Leonard Sr (a leather worker) sent him to live with an uncle he’d barely met. When his father eventually remarried, Nipper, his two sisters and brother returned home, but to a grinding poverty far worse than the Kray twins endured.

So while Nipper shone academically, flying through the entrance exam for Nottingham High School, he couldn’t possibly go. There was no money for the uniform or books and so, aged 14, he got a job in a Player’s cigarette warehouse on 10 shillings a week, giving eight shillings of that to his stepmother.

His solace amid the missed opportunities, was boxing – he’d won his first medal in 1937 when he weighed just 4st 7lb – and went on to join the Grundy Boxing Club. (Some say his name was not due to his size but on account of his agility and ‘nippiness’ in the ring.) The war provided a welcome diversion.

He was called up in 1943, spent the next three years in the Royal Navy and, when he was demobbed in 1946 as a petty officer, he determined to move up and away from his roots. Ironically, it was Nipper’s stature that propelled his career.

He was quickly moved from the uniform branch to become an aide to CID, where his boyhood acting skills – he played the lead role in a school production of David Copperfield – very unpolice-like build and role as a master of disguise allowed him to move freely through different worlds.

He rose rapidly through the ranks, from Detective Constable in Harlesden, North-West London, under the famous Bert Hannam, an officer known as ‘Suits’, who dressed like a banker and had an almost photographic memory, to Paddington, where he worked under Tommy Butler.

It was Butler who later led the investigation of the Great Train Robbery from a Glasgow to London train in August 1963.

He seconded Nipper to Buckinghamshire where he helped crack the case. Just as he later refused to be awed by the power, glamour or celebrity status of the Krays, Nipper had no truck with the romance that somehow grew around the train robbery.

To him, Ronnie Biggs and co were hardened criminals armed with coshes, iron bars and an axe who beat a train driver so badly he later died. He also had no patience with the posturing he saw among officers as they jostled for limelight and praise on a big case. As a result of his success, he was promoted and posted to Scotland Yard’s murder squad to lead the investigation into the Krays’ brutal East End gang.

It was a genius move. It’s hard to imagine anyone else dressing up as a vicar, visiting Krays’ lieutenant Albert Donoghue in Brixton and persuading him to give evidence for their murder trial. And convincing many more, including a barmaid who had witnessed one murder, and Leslie Payne, a second-hand car dealer who turned informer. Nipper also had an unerring instinct for the truth.

So when the bodies of two children were found in Epping Forest, Essex, in 1970 – the famous Babes In The Wood case – he refused to believe the medical advice that they’d died of natural causes and oversaw the interviews of 14,272 people. It was his only unsolved case – until 2000, when paedophile Ronald Jebson, already serving life for murder, admitted the killings and Nipper was vindicated.

But despite his success and talent, Nipper was perhaps too much his own man for some superiors. Passed over for further promotion, he returned to Nottingham in 1970 as assistant chief constable and then national coordinator of the Regional Crime Squads before, having received the Queen’s Police Medal, he retired in 1977.

Naturally, he was never the sort to play golf or tend his dahlias. Within a year, he was appointed national security adviser to the Museums and Galleries Commission – a position set up after the theft of Goya’s Duke of Wellington from London’s National Gallery. He also threw himself back into boxing, becoming chairman of the British Boxing Board of Control, vice president of the World Boxing Council and vice-president of the World Boxing Association.

But he will always be best known as the tiny policeman who ended the Krays’ 12-year reign of terror. As he put it: ‘The label of “The man who brought down the Krays” has followed me since then and will live with me for ever.’

But he was happy with that and gave lectures on cruises reminding passengers that they were not gangland heroes, but not especially bright murderers, torturers and experts in intimidation.

Murderers whom, when they died – Ronnie aged 61 in Broadmoor Hospital in 1995 and Reggie in 2000, eight weeks after being released from prison on compassionate grounds – were honoured with extraordinary funeral parades boasting horse drawn carriages, banners, balloons, marching bands and streets lined with supporters.

Not the sort of send-off 95-yearold Leonard Nipper Read will get. But of course, all that pomp would never, ever have been his style.

Tags: &apos;Nipper&apos;, Leonard, rea
You may also like
Recent Posts