Klay Thompson and the Golden State Warriors took care of business in the Western Conference finals Thursday with a wire-to-wire 120-110 win over the Dallas Mavericks.

The Warriors advanced to their sixth NBA Finals in eight seasons and first since 2019. They will face the winner of the Eastern Conference finals between the Boston Celtics-Miami Heat. The Celtics have a 3-2 series lead with Game 6 set for Friday in Boston.

The Mavericks made it interesting in Game 5, going on a 15-2 run to end the third quarter and cut the lead to 94-84. Luka Doncic scored 15 points in the third quarter. He finished with 28 points, nine rebounds and six assists.

An absolute rainbow by Luka from 3️⃣

The @dallasmavs are in the midst of a 21-5 run on TNT pic.twitter.com/ckGWJ8NWDZ

Doncic played the entire second half until the Mavs waved the white flag and pulled their starters with two minutes to go. The Warriors were too much in the final period. These Warriors have been too much all postseason.

Thompson scored 19 of his 32 points in the first half and finished with eight 3-pointers. And yes, there was a shimmy.

Klay Thompson drains his 4th 3-pointer of the 1st half!

He’s up to 16 points on TNT 🔥 pic.twitter.com/B2kzrbgPzy

All of the Warriors starters scored in double figures. Draymond Green turned in his best performance of the playoffs, scoring 17 points to go along with six rebounds and nine assists. Andrew Wiggins scored 18, Curry had 15 and Kevon Looney finished with a double-double of 10 points and 18 rebounds. Off the bench, Jordan Poole had another outstanding performance with 16 points, six rebounds and six assists.

The Warriors outrebounded the Mavericks again, 51-34. They also assisted on 36 of their 45 field goals in a true team effort in the closeout game.

Golden State was 16 of 16 from the free-throw line, another accolade on an all-around impressive night.

For the Mavericks, Spencer Dinwiddie had 26 points off the bench as the second-leading scorer. 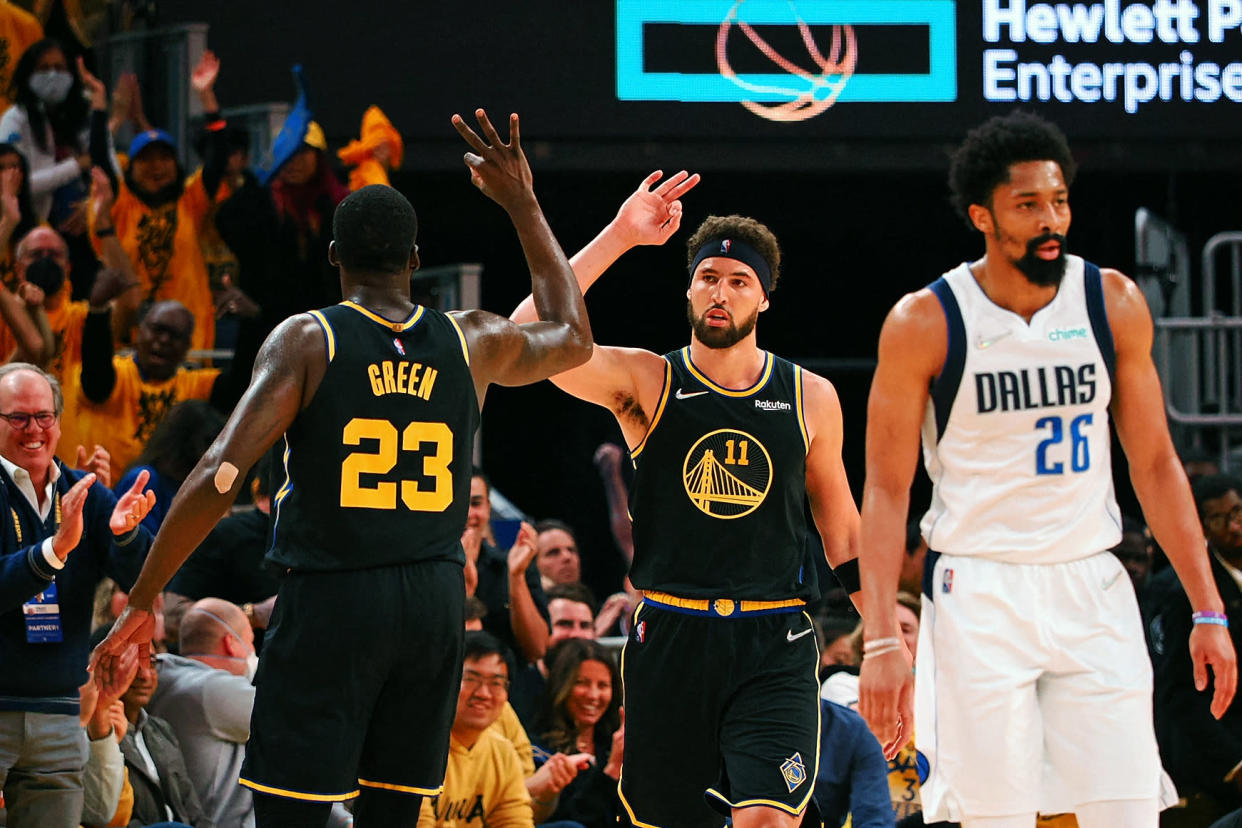