Rome: Their eyes are tired. Their cheekbones rubbed raw from protective masks. They don't smile.

The doctors and nurses on the front lines of the coronavirus pandemic in Italy are almost unrecognisable behind their masks, scrubs, gloves and hairnets – the flimsy battle armour donned at the start of each shift as the only barrier to contagion. 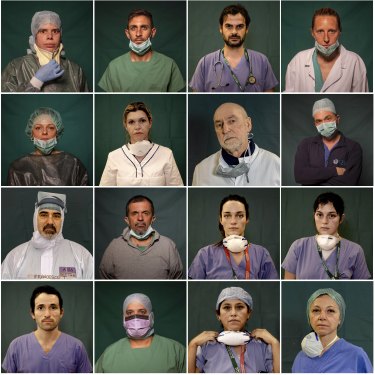 Life savers: Some of the front-line health care workers doing battle against coronavirus in Italy.Credit:AP

Associated Press photographers fanned out on Friday to photograph them during rare breaks from hospital intensive care units in the Lombardy region cities of Bergamo and Brescia, and in Rome. In each case, doctors, nurses and paramedics posed in front of forest green surgical drapes, the bland backdrop of their sterile wards.

Friday was a bad day: Italy registered the most deaths since the country's outbreak had exploded five weeks earlier, adding 969 more victims to raise the world's highest COVID-19 toll to 9134. Lombardy accounted for 541 of them.

Italy also surpassed China in total confirmed cases, and stands behind only the United States. But the National Institutes of Health also said there had been a slowing of infections in recent days, suggesting that a national lockdown was starting to show an effect after 2 1/2 weeks.

For medical staff, any letup from the chaotic crush that marked the initial stage of the virus' spread is welcome. But they know they are nowhere near the end of the emergency. 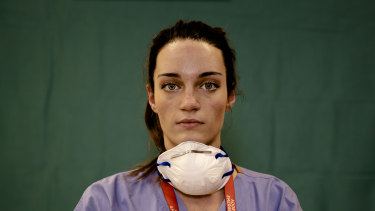 Martina Papponetti, 25, an ICU nurse at the Humanitas Gavazzeni Hospital in Bergamo.Credit:AP

"What we are living through is like a tattoo," said Daniela Turno, an ICU nurse at the Humanitas Gavazzeni hospital in Bergamo. "It will remain forever."

Sometimes hospital workers don't drink water or any liquids during their 8-, 10-, or 12-hour shifts so they don't have to go to the bathroom and disrobe. They follow strict protocols while taking off their hazmat suits, gloves and masks, knowing that one wrong move could mean they, too, will catch the virus.

Already, more than 7100 health care workers around the country have been infected. They are sent home to recover and report back to work when they test negative. Their absences are sorely felt, creating more work for those left standing. More than 50 doctors never recovered and are counted among the dead.

The stress in the ICU wards is palpable, the silence deafening. Sometimes all you can hear are helicopters taking off and landing outside, transporting another critical patient to a hospital that isn't quite as full.

The heroes of Italy's epidemic aren't just treating the sick with respirators and oxygen. They are standing in for sons and daughters, brothers and sisters, who under normal circumstances would be able to visit, hold the hands of sick loved ones and offer a word of encouragement.

COVID-19 patients must be isolated, and their family members quarantined. The sick are alone, often elderly – and terrified.

"These are patients who are starving for air," said Dr Gabriele Tomasoni, head of the ICU at the public Civic Hospital in Brescia. He said his team provides not only life-saving help with machines, but something else, more human. 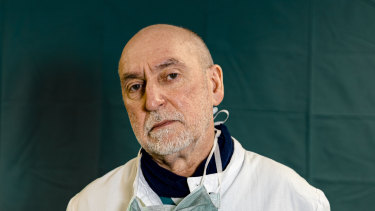 "We know these are elderly patients," Tomasoni said at the end of his shift on Friday evening. "They need closeness. Tenderness."

You can see it in their eyes.

Tags: front-line, her, Italy's, medical
You may also like
Recent Posts