Alex Eleftheriou was little more than a kilometre away from his Sunshine home, taking the shortcut he had taken a “million times”, riding his motorbike on the streets he knew like the back of his hand when a car T-boned him.

He broke multiple bones, was in an induced coma for 21 days, and in hospital for about 12 months recovering from the crash on September 19, 2012 . He was only 17. 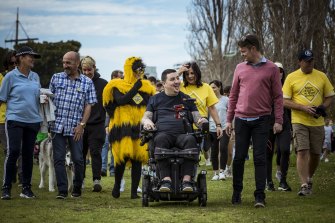 Mr Eleftheriou’s life was upended and his plans to become a carpenter instantly shattered. The 26-year-old is a quadriplegic as a result of the accident but he is sharing his story to shine a light on the horrors of road trauma, as part of Road Trauma Support Service Victoria’s annual walk, which took place at Albert Park lake on Sunday morning.

On the night of the accident, Mr Eleftheriou was pulling up to the traffic lights when they turned amber. So, armed with “that textbook teenage confidence”, he decided to cut through the petrol station to “save only one or two minutes”.

He doesn’t even recall seeing headlights – everything went black instantly. And his life changed forever. 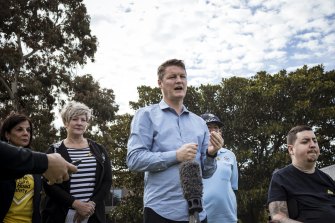 He broke his C4, C5 and C6 vertical vertebrae, both of his collarbones, both shoulder blades, his shoulder, right femur (which snapped in half), tore tendons and ligaments in his arms and legs, and shattered his right ankle down to the navicular bone.

“I’m lucky to be alive,” he says bluntly. “When my family and friends asked the doctors, ‘what does it look like?‘, the doctors couldn’t actually say ‘yes’ it’ll be alright or no he’s going to pass away’. They didn’t even know because it was so traumatic at the time.

“I was in hospital with a tracheostomy because I couldn’t breathe. During the accident, I had the handlebars pierce my lung so I had a bruised lung and a collapsed lung, so being in hospital was utterly traumatic. I also had sepsis. I wasn’t able to drink water, breathe for myself, talk while I had the tracheostomy … that was also traumatic.”

Eighty people have been killed on Victorian roads so far this year, compared with 78 for all of 2020. And each year, the Transport Accident Commission receives 20,000 new injury claims, including 1400 for serious, life-changing trauma, such as Mr Eleftheriou’s.

The Manor Lakes man’s dreams and outlook on life has completely changed. At 19, he went back to university to obtain his diploma in building and construction, with hopes of one day building homes and residential facilities to accommodate the needs of people with disabilities. He also does public speaking to raise awareness about road safety.

“Dreams definitely changed, mentality changed, but almost for the better,” he says.

Roads Minister Ben Carroll was out at Albert Park Lake for the walk, and said while 80 people have been killed on Victorian roads this year, the lives of hundreds more had been changed as a result.

“You are a lucky one if you get caught by Victoria Police because you get to make it home safely to have dinner, celebrate Easter or Christmas with your families – many Victorians don’t,” Mr Carroll said.

Tags: Alive, be, Hundr, I’m, Lucky, to
You may also like
Recent Posts