Hundreds of people lined the streets to send off a baby boy who was killed after his pram was struck by a car.

Ciaran Leigh Morris was pinned to a wall by a BMW that mounted the pavement in Brownhills, West Midlands, at around 4pm on Easter Sunday.

The newborn was rushed to Walsall Manor Hospital after being given CPR at the scene but nothing could be done to save his life despite the best efforts of medics.

His funeral cortege passed through the town’s high street yesterday, with the area covered in blue ribbons in his memory, as Ciaran’s teenage parents, supported by friends and neighbours, said a final goodbye.

A hearse bearing floral tributes led a horse-drawn carriage through the streets before motorbike and scooter riders formed a procession. 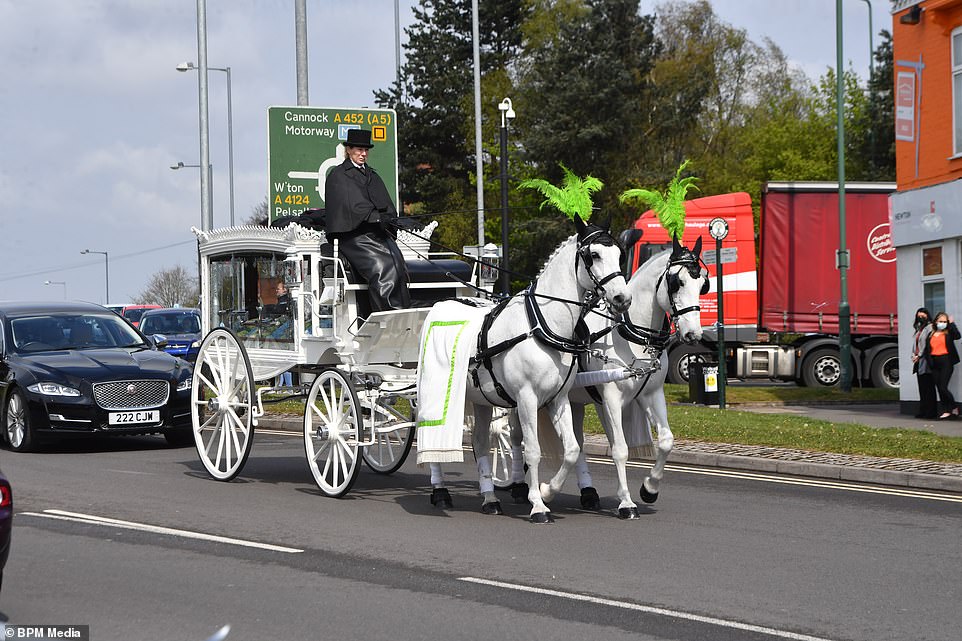 A horse-drawn carriage was led through the streets of Brownhills, West Midlands, in memory of baby Ciaran Leigh Morris 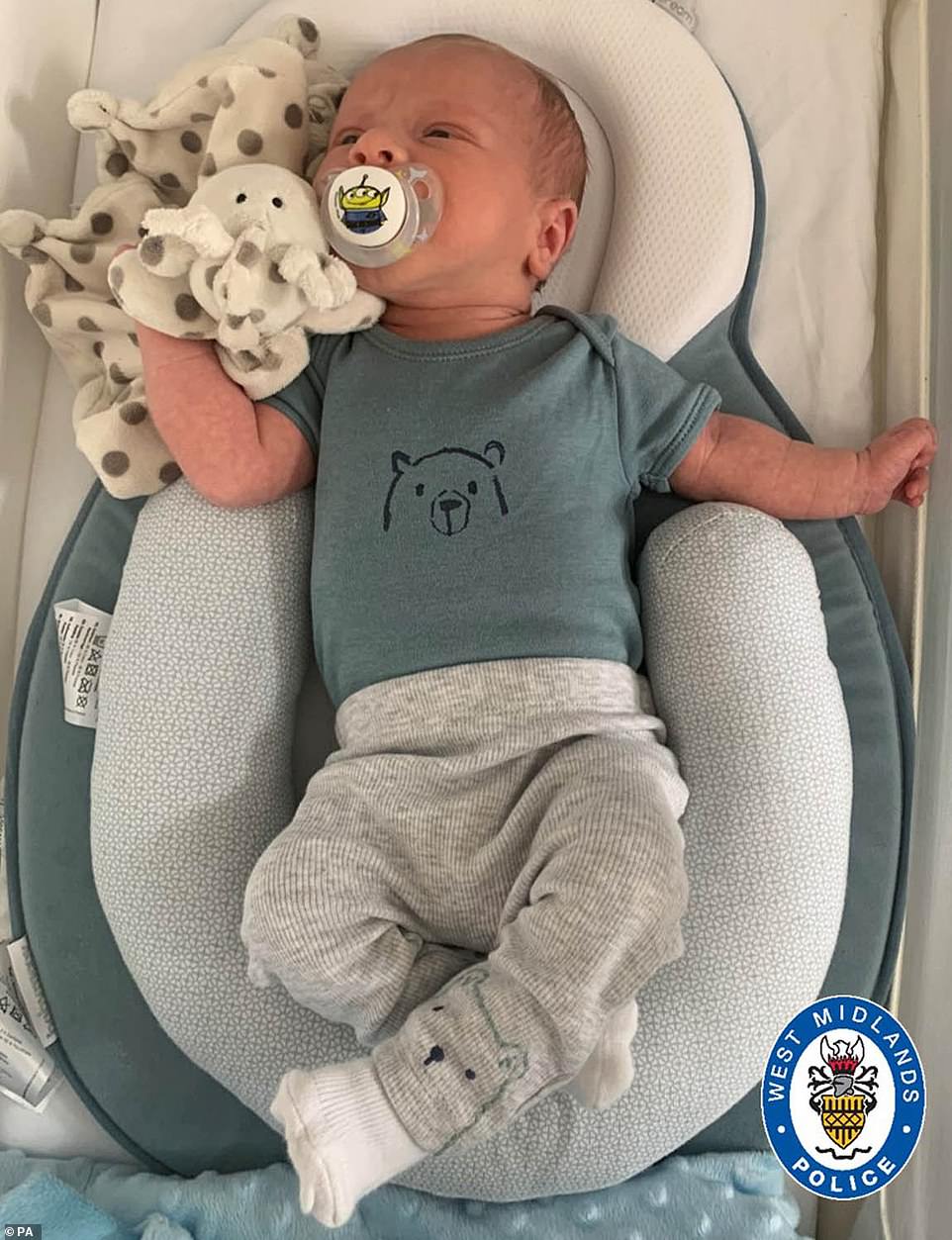 Two-week-old Ciaran Leigh Morris (above) who was killed after his pram was struck by a car died as a result of ‘major trauma’, an inquest heard 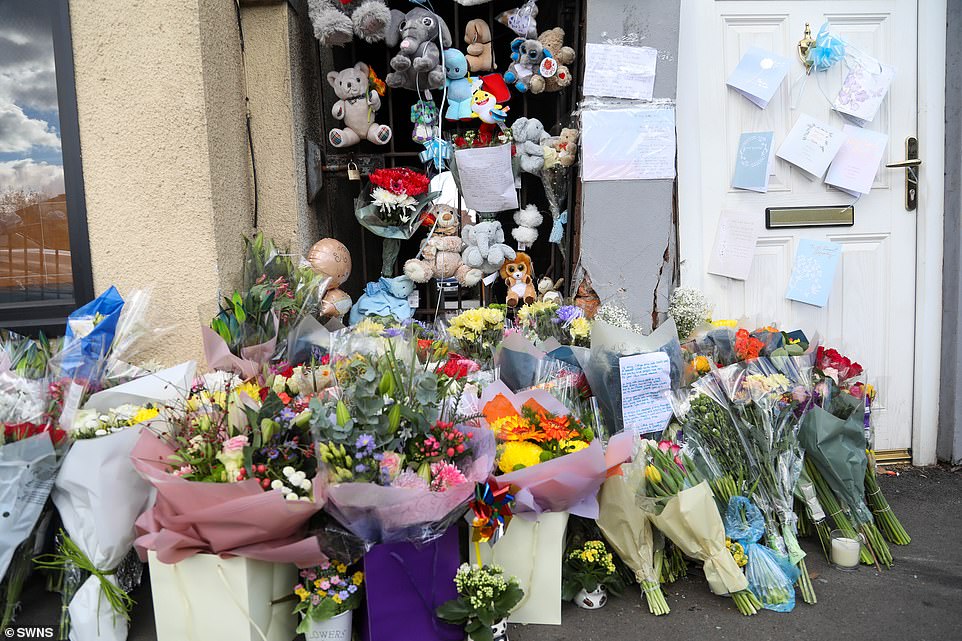 Floral tributes left at the scene on High Street, Brownhills, where the newborn was tragically killed on Easter Sunday 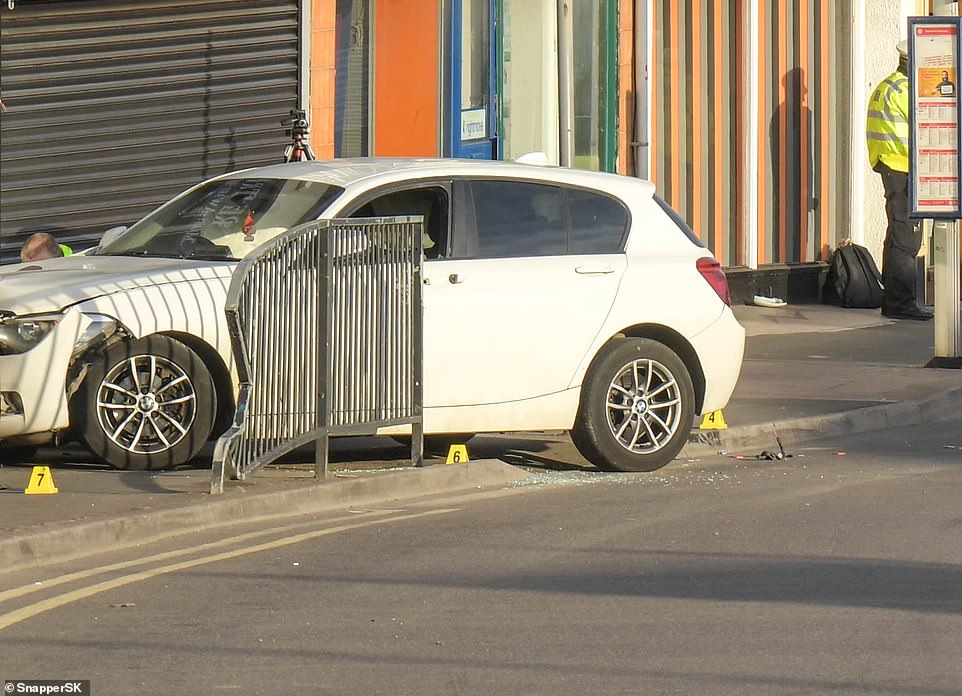 The baby was pinned to a wall by a BMW that mounted the pavement in Brownhills, West Midlands, at around 4pm on Easter Sunday

Earlier this month, an inquest into Ciaran’s death was opened and adjourned at Black Country Coroner’s Court by Area Coroner Joanne Lees.

She revealed parents Camaron Morris and Codie Holyman, both 18, had to identify tiny Ciaran’s body and offered the couple her ‘sincere condolences.’

She said: ‘We are here to open the inquest into the death of Ciaran Morris. His death was reported to me by West Midlands Police.

‘It was reported to me that Ciaran had been taken in there following a collision at 4pm on April 4, 2021 involving a vehicle that mounted the pavement and collided with a pram carrying baby Ciaran.

‘Paramedics attended and administered CPR, then he was taken to Manor Hospital in Walsall where sadly he was confirmed as having passed away.

‘Doctor Lawson has provided the medical cause of death, that was major trauma caused by a road traffic accident.

‘Ciaran was identified by his parents Camaron Morris and Codie Holyman. In these circumstances an inquest into the death is required. 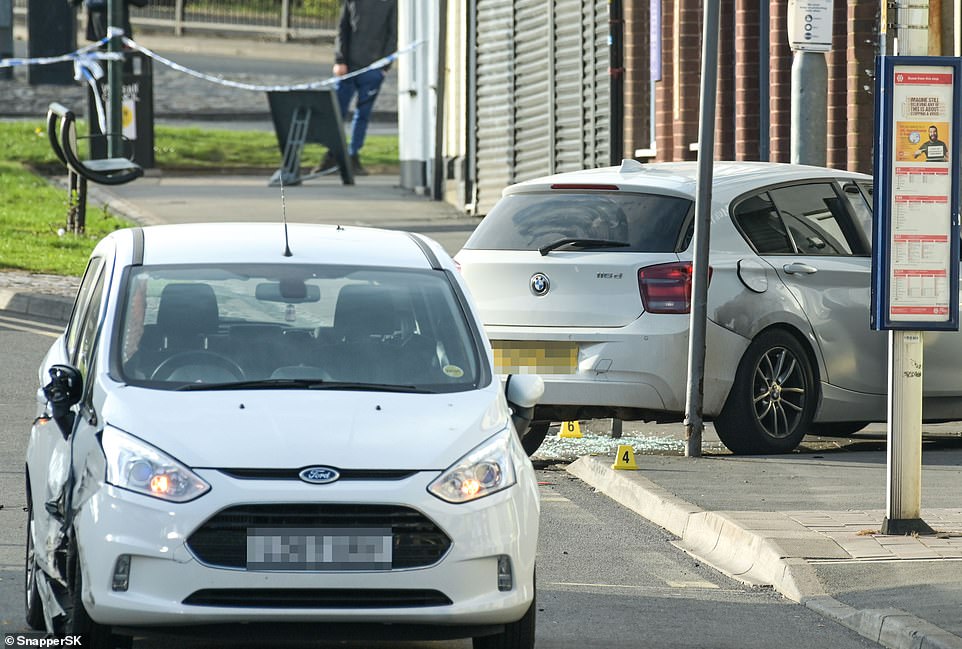 Ciaran suffered serious injuries after a white BMW collided with his stroller as his family were pushing him along the pavement in Brownhills, near Walsall, West Midlands, on Easter Sunday afternoon (pictured, the scene of the crash) 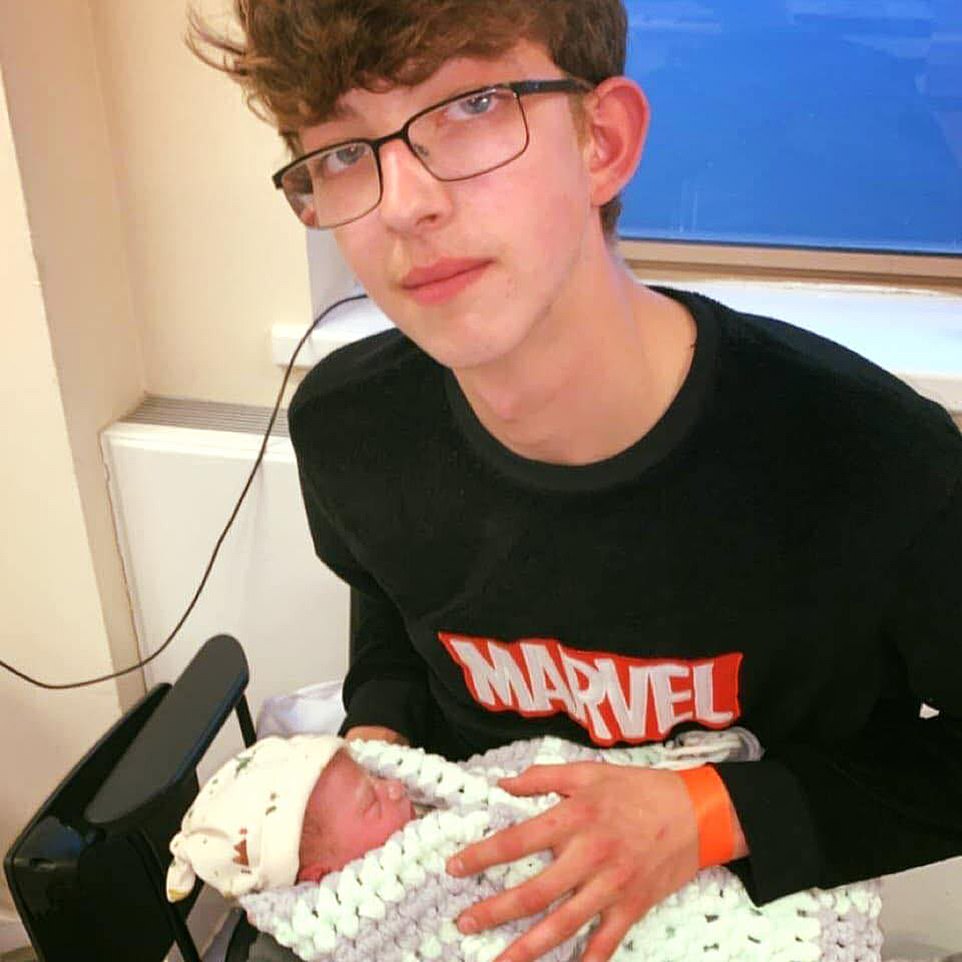 Camaron Morris, father of Ciaran, pictured with the tragic baby shortly after he was born 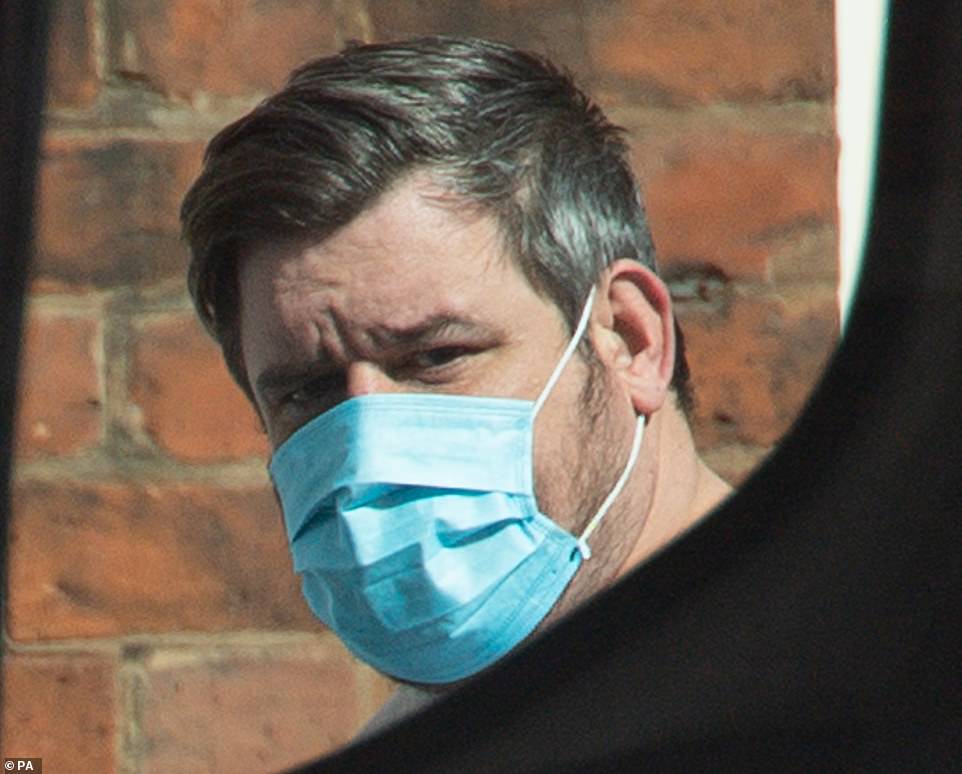 ‘I have been made aware a person has been charged with a criminal offence in connection with the death of Ciaran Morris.

‘Therefore I am going to open the inquest into the death of Ciaran Morris.

‘I am going to suspend my coronial conclusion into the death of Ciaran pending the outcome of criminal investigations.

‘I would like to offer my sincere condolences to Kiaran’s family.’

Earlier this week Camaron, a McDonald’s worker, and Codie, a college student, paid tribute to their newborn son.

They were said to have been on their first walk together as a family when the collision occurred and had been left ‘numb with grief’.

The couple said: ‘Mommy’s and Daddy’s hearts will always ache, we love you more than anything.

‘We didn’t get to keep you for long but we are happy we had the chance to meet you, look after you and call you our son.

West Midlands Police said the crash, which happened on Brownhills High Street, happened after the car was in collision with a Ford vehicle. 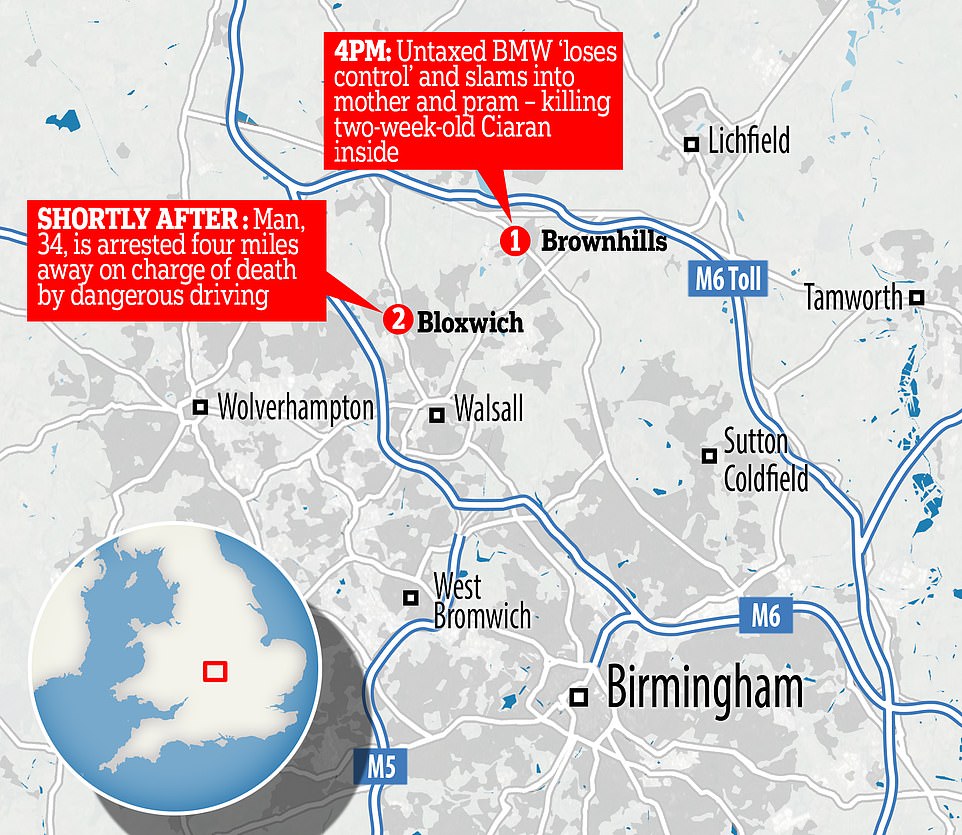 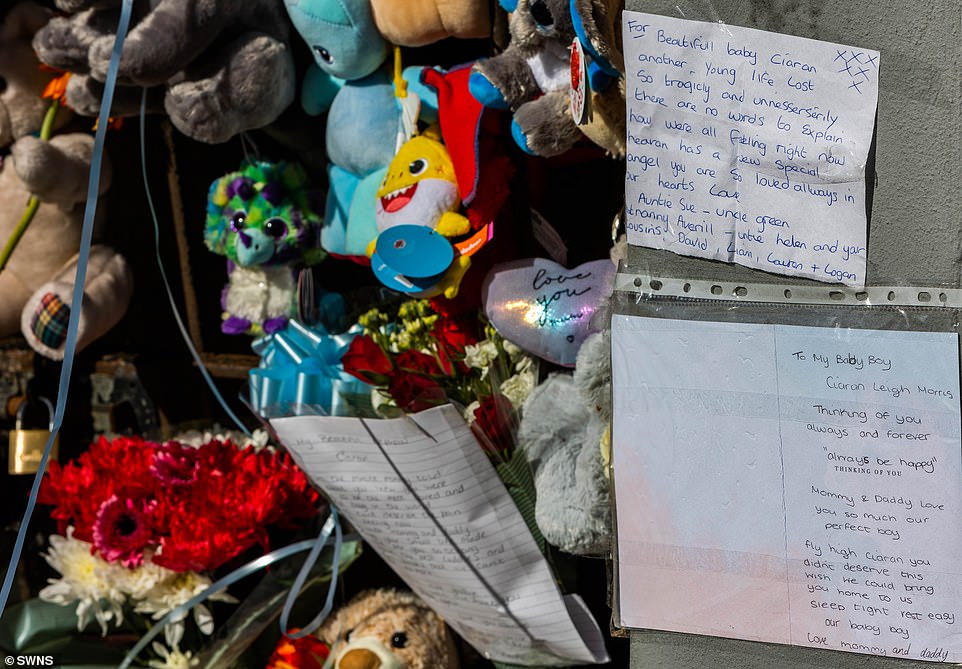 A note (bottom right) left by the parents of Ciaran Leigh Morris at the scene on High Street, Brownhills, Walsall

It then mounted the pavement and struck the pram being pushed along by Ciaran’s family leaving the youngster with catastrophic injuries.

Sergeant Mark Crozier said previously: ‘We’ve all been left numb by the sad death of Ciaran. He was just two-weeks-old and his life has been tragically taken away.

‘To see the loss of someone so young is difficult for us as officers, but we know the pain is even greater for Ciaran’s family.

‘We’ll be doing all we can to support them while also trying to establish what happened leading to the collision.’

Well-wishers have raised more than £33,000 towards the funeral of the two-week-old baby so far.

A crowdfunding site which was set up through JustGiving with an appeal target of £2,000 to help support the family, has now raised more than 16 times that total in just four days.

More than 2,000 people and businesses have so far donated.

Among the tributes on the JustGiving page, set up by Karl Roberts, was a message from Barbara Johnson, which read: ‘There are no words to ease the deepest heartache and sadness you must feel at this awful time, no parent should have to experience this. Rest in peace beautiful boy, an angel far too soon.’

Another, from Michelle Butler, said: ‘I have a new grandson who’s 2 weeks old and to think of losing him is beyond tragic. I hope u find comfort and get support from family and friends. How u get over this god knows. I’m so deeply sorry – may he rest in peace.’

He has also been charged with driving while uninsured, failing to stop at the scene of a collision and failure to report a collision.

Mr Davis, 34, was remanded in custody to appear at Wolverhampton Crown Court on May 4.

Tags: for, fune, Hundreds, Line, Street’s
You may also like
Recent Posts