A hospital boss has been sent death threats after Ross Kemp was given access to film on the frontline with NHS staff in a coronavirus documentary.

The programme that aired last week first faced controversy as many questioned how film crews were able to work in wards where people were battling Covid-19.

But the chief executive of Milton Keynes University Hospital where the show was filmed has claimed he has received deaths threats.

Joe Harrison took to Twitter on Wednesday where he revealed he had been forced to contact the police because of two of the threats sent to him. 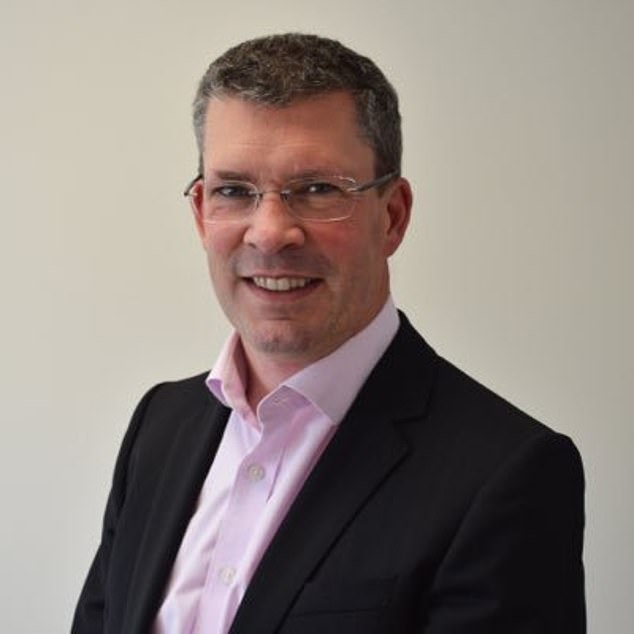 Chief executive of Milton Keynes University Hospital Joe Harrison (pictured above) said he had received death threats, two of which he has now reported to the police 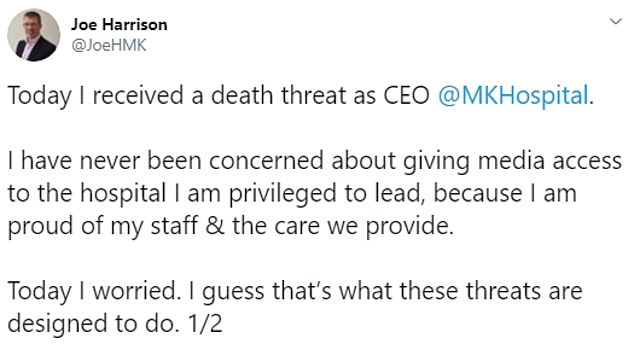 The chief executive said: ‘Today I received a death threat as CEO.

‘I have never been concerned about giving media access to the hospital I am privileged to lead, because I am proud of my staff & the care we provide. Today I worried. I guess that’s what these threats are designed to do.’

He added: ‘The threat came as a response to media access. I have reported 2 police I welcome debate & will listen to feedback on any issue. Threats like this aren’t debate. They are meant to frighten & control. I do not tolerate abuse & violence against NHS staff & I will call it out.’

During the documentary Kemp was seen going around the wards where he witnessed first hand the conditions NHS staff were having to deal with day in day out.

Kemp highlighted how well patients were being treated across the hospital and said the ‘care and love’ was overwhelming.

Mr Harrison’s focus at the hospital has been to improve patient safety and clinical effectiveness.

Mr Harrison has nearly 30 years’ experience working in acute hospitals, and is also a board member on different research panels.

Members of the public came out in support for Mr Harrison, with many slamming those who sent him the threats.

One Twitter user said: ‘So sorry to hear this Joe, unbelievable and unacceptable. I am glad you have called it out. The whole MKUH team are doing a fantastic job. Providing appropriate media access offers valuable insight to the public, my view is it was a good call and has been sensitively done.’

Another said: ‘Appalling and sorry that you have had this threat . I hope that the perpetrator is dealt with appropriately. There is no place for any abuse/ threats / violence against any HCW or indeed anyone who is just doing their job.’

Kate Jarman, the director of corporate affairs at the hospital also tweeted: ‘What @joehmk says – we have listened to all the feedback about this particular programme – positive & criticism, had a lot of debate & it’s informed decision-making.

‘I’ve set out many times why I think media access is vital. Debate is welcome. Threats are unacceptable’.

After the programme aired last week the hospital said that the film crew would be replacing any PPE stock they had used.

‘At a time when there is anxiety nationally about the spread of COVID-19 and the NHS’ ability to respond to the pressures the virus will bring, we felt it was important to give a true account on the work being done in hospitals and in community settings, and the measures being taken to prevent the spread of the virus.

‘We hope that the programme will help to reinforce the message that it is important for members of the public to stay at home and protect the NHS.

‘We also hope that it will help to illustrate that hospitals and communities are still running business as usual in certain services, including maternity and emergency departments, up and down the country and that the NHS and other care organisations are there to help people that need it for non-COVID-19 related issues.’

Tags: CEO, Death, hospital, is, sent, thr
You may also like
Recent Posts