Senior government ministers will consider whether the state can safely ease some restrictions, including reopening playgrounds and allowing year 12 students back into the classroom, as Victoria braces for another prolonged lockdown.

State government sources, who spoke to The Age on the condition of anonymity to provide insights into high-level discussions, said ministers would consider which restrictions could be wound back as epidemiologists warn reaching zero cases in Victoria was increasingly impossible. 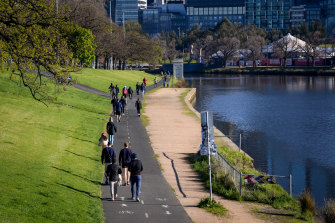 Scenes from Melbourne lockdown, along the Yarra on Saturday morning.Credit:Eddie Jim

At the top of some government officials’ agendas are permitting children to use playgrounds, easing some restrictions in regional Victoria and allowing year 12 students back into the classroom.

Senior government officials met late Sunday afternoon to receive a briefing from the public health team and are expected to make a final decision on Tuesday about what lockdown would look like beyond Thursday and when it was scheduled to end. The Chief Health Officer’s advice to government is not yet known.

It comes as the state recorded another 92 new cases of coronavirus, largely in Melbourne’s northern and western suburbs, of which just 19 were isolating for their full infectious period, dashing any hope Victoria has of exiting lockdown.

The last time Victoria had more than 90 cases was on September 3 last year, when 112 people tested positive to coronavirus.

It took 61 days to drive down cases to zero. The Delta variant now is twice as infectious as the Wuhan variant circulating the state last year.

Of particular concern, is that 31 new infections on Sunday were classified as mystery cases, meaning the source of transmission could not be traced.

An Echuca aged care community was on Sunday night added to the exposure sites list as a tier-1 location for all staff and visitors from August 13-26.

Premier Daniel Andrews said the Victorian government was considering whether some restrictions could be safely wound back when lockdown is extended beyond Thursday.

“If not, then we will all have to find a way, find it in ourselves to push on and continue to throw everything we’ve got at trying to drive these numbers down,” Mr Andrews said.

Government sources told The Age a decision would need be to made imminently on bringing year 12 students back to school after they effectively missed out on an entire year of face-to-face learning during their VCE, due to last year’s four-month lockdown.

The effectiveness of the curfew is also being examined amid the chance some people will be deterred from visiting other households, which pose the highest risk of transmission, if police caught them outside their homes after 9pm.

Prominent Victorian epidemiologist Catherine Bennett said the spread of the virus across Melbourne meant it was looking impossible Victoria would crush the outbreak back to zero this time.

She predicted in the coming weeks the government will concede it cannot keep the outbreak fully contained and decide to wind back some oppressive restrictions that are not major contributors in transmission.

Reopening playgrounds and allowing year 12 students back into the classroom before their final exams, were two areas that could be eased, allowing the state to continue to suppress the virus and keep serious illness and hospitalisation low, Professor Bennett said.

However, she warned allowing year 12 students back into the classroom required ongoing stringent public health measures. This includes using the best ventilated classrooms, only permitting students on-site during critical times for group work, and mandatory masks for teachers and students.

Rapid antigen testing of students could also be considered to minimise the risk they will bring the virus to school.

“With year 12 students you’re trading off the benefits of them being in a classroom with the risk that they’ll have the virus,” Professor Bennett said.

She said there would never be zero risk of transmission at playgrounds, but the real danger was interaction between households.

“If parents understand how to have their kids in play in playgrounds safely…where you don’t have a whole lot of kids climbing on the same piece of equipment… you can find some kind of safe compromise,” she said. “This isn’t relying on kids to do the right thing, but means parents know how to use those playgrounds by being really mindful of cross-household transmission.“

Professor Duckett said the Victorian government should remain cautious, but it could afford a more nuanced approach for restrictions in regional Victoria, for example, distinguishing Shepparton, where an outbreak has seeded, from western Victoria.

The economist also said the government must consider relaxing some restrictions for fully vaccinated people, including access to cafes and the five-kilometre rule, to lighten the burden of the lockdowns.

“This would not mean abandoning a COVID-control goal; it would simply mean recognising the reality that the principal aim is to protect the public and the hospital system, and that we could still achieve that with a lighter touch,” Professor Duckett wrote in an opinion piece for The Age on Sunday.

Professor of psychiatry at Monash University, Jayashri Kulkarni, said the mental health tool of the latest lockdown in Victoria had triggered another surge in Victorians of all ages seeking professional help, including young people, those living alone and parents who were struggling to cope.

Professor Kulkarni said she was observing increasing levels of despair, hopelessness and frustration in patients. Some were exhibiting symptoms of post-traumatic stress disorder that she believes was centred around “the sense of the unknown”.

Professor Kulkarni said if it was safe to do so, reopening parks and allowing year 12 students to go back into school, would make significant difference to families.

“Social isolation is difficult for a lot of people,” she said. “If you extend that to the families with small children…it has been very difficult not having an outlet for the children.”

She said women were seeking help at record levels as they struggled to cope with the pressures of home schooling, caring for elderly relatives, and the economic stress of the pandemic with no outlet to socialise with other adults.

“Women are largely responsible for bearing, caring and rearing of children,” she said.

Meanwhile, Victorian Chamber of Commerce and Industry chief executive Paul Guerra said he expected the curfew and five-kilometre travel limit to be lifted on Thursday, and called for a plan to allow businesses in regional Victoria with no cases to be allowed to trade.

“Businesses across Victoria are in crisis. They are incredibly frustrated that, despite doing everything that has been asked of them: COVIDSafe Plans, QR code check-ins, observing density limits and, for many, closing their doors and standing down staff, there is still no clear path to how or when they can open,” Mr Guerra said.

However, computer epidemiologist, Mikhail Prokopenko, warned against Victoria easing any of its restrictions, including sending year 12 students back to the classroom, before the 70 to 80 percent vaccination target was reached.

“I understand the pressure. It is a very difficult balance, but Victoria is so close to reaching its 80 percent target and I think they should hold off on easing any restrictions until then,” he said.

Professor Prokopenko predicts the state will reach its 80 percent vaccination milestone in mid-November.

Mr Andrews rejected any criticism the latest lockdown in Victoria had failed to stem the spread, and said he received public health advice on Sunday morning that stated the state could beat COVID-19 before the population is vaccinated.

“It’s bloody tough. It’s incredibly difficult, but if you look at what’s happening in Sydney, you could let this off, you could make decisions that were not backed up by health advice, and we would not have 90 cases today, 93 cases today, we would have thousands of cases,” Mr Andrews said.

NSW on Sunday recorded 1218 cases of COVID-19 and six deaths.

Additional allocations of vaccines were delivered to Victoria and New South Wales to deal directly with major outbreaks and only when extra vaccine supplies were secured from pharmaceutical companies.

In a phone call on Sunday, Prime Minister Scott Morrison told Mr Andrews that vaccine had always been distributed on a population basis to all states and territories and that would continue.

Sources familiar with the discussion said Mr Andrews had also expressed his “strong support” for the national plan during the call.

Anyone who worked at or visited the Echuca Community for the Aged – Wharparilla Lodge at 21 Hartshorn Drive between August 13 at 9am on August 26 at 6pm needs to immediately get a COVID-19 test and quarantine for 14 days.

With Rob Harris and Roy Ward

Stay across the most crucial developments related to the pandemic with the Coronavirus Update. Sign up for the weekly newsletter.

Tags: considers, Easing, government, so
You may also like
Recent Posts