Green shoots? The number of people being admitted to hospital with coronavirus FALLS in London and some other parts of the UK but experts warn it is too early to say the battle is being won

The number of people admitted to hospital with coronavirus in the worst-hit part of the UK fell for the first time.

London, which has been at the heart of the pandemic in the UK, saw new admissions fall below 4,000 again on Wednesday, according to Government data released tonight.

There were also falls in the Midlands, East Midlands and North West as the death toll rose sharply by 684 today to take the total number of tragic fatalities so far to 3,605.

The 24-hour total  has risen by a record amount almost every day this week, with a five-fold increase in deaths in a week.

However at tonight’s news conference Professor Jonathan Van-Tam, deputy chief medical officer for England, cautioned against reading too much into the data.

He said that overall the number of admissions was still rising. Asked about seeing any ‘green shoots’ in the battle against the virus he added: ‘If you’re asking me about the healthcare hospital admission data then I think it’s too early to make any kind of interpretation such as that. 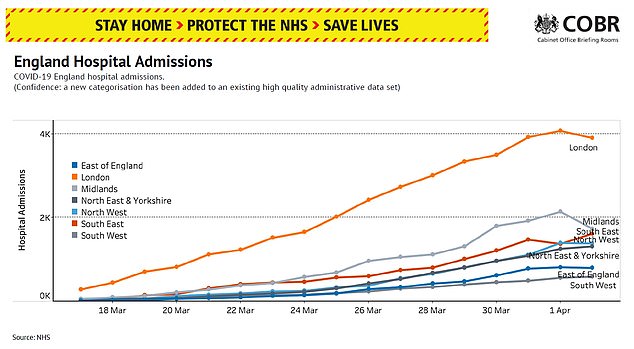 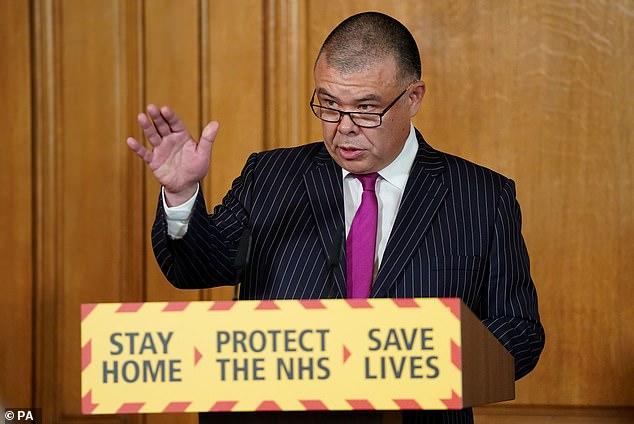 Professor Jonathan Van-Tam, deputy chief medical officer for England, cautioned against reading too much into the data.

‘There will be day-to-day variations in the number of hospital admissions that occur as a feature of near-random chance.

‘Please stay at home for them’: Chief Nurse pleads with public not to go out in mini-heatwave this weekend

England’s chief nurse invoked the memory of medics killed by coronavirus today as she made an emotional plea for the public to stay at home this weekend, despite a mini-heatwave due to sweep the country.

Ruth May said was vital they remain in lockdown despite the warm spring weather, after two nurses were revealed to have been killed in the past 24 hours.

Mother-of-three Aimee O’Rourke, 39, passed away last night at the QEQM Hospital in Margate, Kent, following the surfacing of symptoms two weeks ago.

Flanking Health Secretary Matt Hancock at a news conference this afternoon, Ms May said: ‘I ask you to remember Amy and Areema. Please stay at home for them.’

‘So one mustn’t interpret the data, one needs to be patient and look for a long-term trend.’

However, Prof Van-Tam said he ‘absolutely sees green shoots’ of hope over containing the spread of Covid-19, given the response to the social distancing measures.

He said: ‘I absolutely see green shoots, I really do in terms of the massive change in public behaviour that has already taken place.

‘If that continues for as long as the Government asks for it to continue then they really will be quite big green shoots in the end.’

Asked  when the peak of the epidemic is expected to be, he said: ‘We don’t know the answer to that yet.

‘We’ve always said that we will know if our social distancing measures are working a few weeks after we’ve put them in place.’

He reiterated it was ‘too soon to say’, adding: ‘It’ll partly depend upon how well those social distancing measures are adhered to by every one of us.

‘I hope it will be soon. We’re going to watch very carefully to see when we’ve hit the peak and when we’re starting to turn it but we will not take any premature actions.’

Addressing whether the NHS will have enough ventilators during the peak, given some fear they will not receive the critical care they need, Professor Van-Tam expressed confidence in equipment supplies.

He said: ‘I can tell you I don’t think we’re anywhere close to that kind of scenario at the moment. We will watch it extremely closely and we will make decisions as we need to on a day-by-day basis.’

Tags: as, caution, Experts, hospit, urge
You may also like
Recent Posts