Brussels: European Union finance ministers have agreed to a plan calling for more than half a trillion euros worth of new measures to buttress their economies against the onslaught of the coronavirus, but dealt a blow to their worst-hit members, Italy and Spain, by sidestepping their pleas for the bloc to issue joint debt.

Even in the face of an unprecedented economic crisis caused by a virus that has killed more than 50,000 and infected more than 500,000 bloc citizens, wealthier northern European countries were reluctant to subsidise cheap debt for the badly hit south. 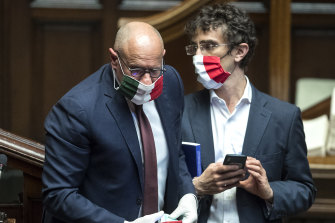 MPs Fabio Rampelli, left, and Galeazzo Bignami wear face masks in the colours of the Italian flag to protect themselves against the spread of Covid-19.Credit:LaPresse/AP

And while Germany, the Netherlands and others showed greater generosity than they had in previous crises, the details of the measures announced showed they had gone to great lengths to limit and control the way the funding is used.

But the ministers were not able to reach an agreement on issuing joint bonds, known as "corona-bonds", despite pleas from the leaders of Italy and Spain, which are bearing the brunt of the crisis, after staunch resistance from Germany, the Netherlands and others. And, in a victory for the Netherlands, which was lobbying to restrict how the bailout funds can be used, the ministers decided they should be limited to health-related programs.

The finance ministers were well aware of the dramatic toll the virus was taking on all the bloc's economies and that a failure to produce an agreement would be disastrous for the confidence of both the bloc's citizens and for financial markets.

"The most important thing for the finance ministers was to sign off on a deal and a 540 billion-euros tagline," said Mujtaba Rahman, the head of Europe practice at Eurasia Group, a consultancy. "But despite everyone patting themselves on the back, there are lots of substantive gaps in the deal that will only become apparent later down the line," he added.

The finance ministers were well aware of the dramatic toll the virus was taking on all the bloc's economies and that a failure to produce an agreement would be disastrous for the confidence of both the bloc's citizens and for financial markets. As the US moved to announce stimulus measures, there was a growing sense that Europe was once again doing too little too slowly.

At stake is the recovery of the world's richest bloc of nations, including the eurozone's 19 members whose currency is one of the most important globally.

A failure by the EU to help its most affected members would hurt not just its economies, but also affect regional politics and societal attitudes, and cause the bloc to lose clout on the world stage.

While the half-trillion-euro figure, together with each individual country's national stimulus programs, is a sizable sum, it is still hard to assess whether it will be nearly enough to help European economies withstand the fallout from the health crisis and achieve any sort of growth as economic activity is gradually resuscitated.

The bloc's wealthier countries may have thwarted the joint bonds, but, inevitably, rescue packages for the worst-hit economies will involve subsidies from the richer north to the poorer south, a recurrent, toxic theme in the bloc's history.

While all countries agreed on Thursday that there should be "solidarity" with the worst-hit countries, and that the European economies are so deeply integrated that rescue packages are helpful to all, the shape of that solidarity proved deeply contentious.