Workers at global ethical cosmetics company Lush claim they have suffered physical injuries and have developed breathing difficulties due to allegedly poor working conditions in the chain’s Australian factory.

Lush, a British-based firm that prides itself on its handmade products and ethical supply chain, employs up to 70 full time workers in Australia who create its handmade soaps, shampoos, and bath bombs in a factory in Villawood in Sydney.

Three current Lush workers, who spoke to Guardian Australia on the condition of anonymity, claimed that they have suffered back and wrist injuries and are given personal quotas that result in lifting the equivalent of 500kg of dry materials a day, without adequate equipment or personal protective equipment.

And during the early stages of the coronavirus pandemic, a P2 mask shortage meant they had to work for months with only surgical masks, which do not protect against particle inhalation.

Staff who spoke to Guardian Australia also alleged that some reports of sexual harassment and bullying were effectively ignored by the company.

The affected staff said they were not asking for a customer boycott of Lush, but wanted the company to act on providing better equipment, personal protective equipment, and reform its harassment reporting system. 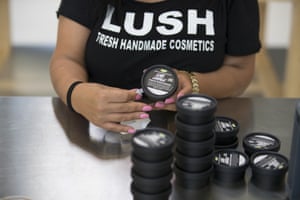 Workers in Lush Australia’s Villawood factory make hundreds of cosmetics a day, all by hand.

“Individually we lift buckets of up to 15kg of powder with no assistance,” said one worker, who has documented soft tissue wrist injuries. “That is repeated over and over. There is not an adequate amount of equipment that assists us in doing these things.”

Another worker who makes bath bombs said: “It involves a lot of lifting, a twisting movement of your wrist, which has caused wrist injuries, back injuries, shoulder injuries, just from repetitive movement.”

They said the “Twilight” bath bomb, made with lavender and marketed to “help get you ready for a good night’s rest”, has a minimum target of 600 units per person, per day.

“It takes a good seven hours to make that much per person, you’d be lifting about 400 or 500kg for the whole day,” a staff member said.

A third worker in the same factory said she had suffered lower back injuries from her time at Lush. “I had mostly wrist injuries, right now I am going through a back injury. “One of the most concerning [injuries] was I had a pinched nerve. It kind of disabled my legs for about half an hour. I literally fell on the floor. And there was nobody in the room, so I had to crawl to the manager’s desk to get up on the chair and wait for someone to come in.”

She said the pinched nerve injury had resolved, but she had chronic lower back pain.

“I love going to the gym, and it’s pretty much interrupted my time there, it sucks. I used to go maybe four to five days a week and now I am lucky if I can even get in two days. It hurts too much or I am wasting time at the doctor’s office with physio appointments.”

Staff said they had asked the company to provide trolleys to wheel heavy ingredients but claim this was previously denied.

One worker also said he saw another employee, a man in his 40s, fall and hit his head, but claimed factory management at the time refused to call an ambulance.

‘My God, it’s chaos’: Lush’s founder on why he is so downcast

“A Christmas casual a few years ago slipped on a wet floor and hit his head on the side on a metal table and he sort of had a split in his hair where it was gushing blood,” he said. “They basically flat-out refused to call an ambulance.”

According to Lush Australia’s website: “Lush products are made in spaces that are more like big kitchens than manufacturing sites. We have many more people working in our kitchens than we have machines to ensure we’re producing cosmetics with our personal touch, creating local jobs and using local resources.”

The company describes itself as “a campaigning company” and says its bath bombs have been used to “raise awareness and money for the groups we support”.

“So as well as being packed with sustainable and regenerative ingredients, these bath bombs can also create positive change across the planet.” 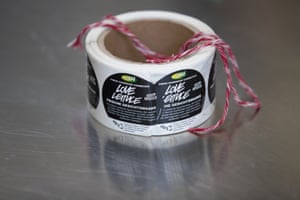 One worker told Guardian Australia that staff at the factory went “a couple of months” without P2 masks because they were “in short supply due to Covid”.

The worker said he now had symptoms of asthma that he believed were caused by the dust.

“We have resorted to just basic surgical masks,” he said. “They do nothing to stop inhalation of dust particles”.

“I used to be a good singer,” another worker said. “I love singing, I love music, it is my favourite thing in the world, and now I feel like my lungs are destroyed … now I can’t really sing as well as I used to.

“Even if I am running around a field or gym, I actually have asthma attacks after it now, I need my puffer all the time. I have a cough that won’t go away … I never have had asthma before in my life. Pretty much when I started working at Lush, that is when it all started.”

In a statement, the director of Lush Australia and New Zealand, Mark Lincoln, said he was aware of complaints, and the company “always” wanted staff to feel safe.

“Since these concerns were raised, we have reviewed every past and present complaint, both formal and informal. Throughout the review period, it has become apparent that many of these issues were things we were previously unaware of, whilst other incidents were recorded and believed to be fully resolved.”

Lush Australia did not respond to specific questions about whether wrist, back and shoulder injuries were common, whether employees had developed breathing difficulties, or about P2 masks. 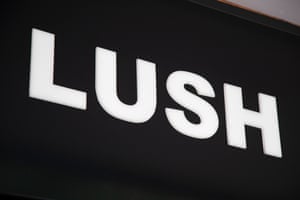 Two workers also told Guardian Australia that they felt harassment and bullying complaints, including sexual harassment and homophobic comments, were not adequately dealt with by the company.

“We told them we don’t trust them to handle grievances anymore,” one staff member said.

One worker complained that they had been sexually harassed by another coworker, who followed her to her car after work on multiple days, but she was not satisfied with the action that was taken by the company.

“They pretty much had a mediation session, which I didn’t really want to do,” she said. “If someone stalked me to my car and stares at me every day, the last thing I want to do is [sit at] the table … with our managers and try and sort it out. Why should I try and sort it out? He’s the one doing the bad stuff.

“He got away with it by saying ‘I didn’t do it’ and I didn’t get a chance to present evidence.”

Another worker claimed that one member of staff said “some pretty vile and homophobic things” to another member of staff. “This was explained to people support and she admitted to it, but she still continues to work for the company.”

In a meeting with Lush management in July, where Guardian Australia understands Lincoln was present, staff said they asked for a new complaints system outside of the current “people support” system.

“We want an entirely different investigative process. An impartial team to deal with it. We just want some justice when these claims are made, we want them to be investigated properly and dealt with properly.”

Lush Australia said in a statement that all complaints that have been substantiated over the past three years have “resulted in some form of disciplinary action”, with more than a third resulting in that person being fired.

It did not say how many claims had been substantiated, or how many people in total had been fired.

Lincoln said the company would improve the current systems rather than adopt the workers’ request for a new reporting system.

“Our priority at the moment is providing improved communication on the systems available, so that our staff feel empowered to access what is needed during all the ups and downs of working life,” he said.

Tags: Business, Industrial relations
You may also like
Recent Posts