TERRE HAUTE, Ind. — The Trump administration early Saturday carried out its 13th federal execution since July, an unprecedented run that concluded just five days before the inauguration of President-elect Joe Biden — an opponent of the federal death penalty.

Dustin Higgs, convicted in the killings of three women in a Maryland wildlife refuge in 1996, was the third to receive a lethal injection this week at the federal prison in Terre Haute, Indiana.

Higgs, 48, was pronounced dead at 1:23 a.m. In his final statement, Higgs was calm but defiant, mentioning the victims by name.

“I’d like to say I am an innocent man. I did not order the murders.”

Louds sobs of a woman crying inconsolably echoed for several minutes from a room reserved for Higgs’ family as his eyes rolled back in his head, showing the whites of his eyes before he stopped moving entirely.

The number of federal death sentences carried out under Trump since 2020 is more than in the previous 56 years combined, reducing the number of prisoners on federal death row by nearly a quarter. It’s likely none of the around 50 remaining men will be executed anytime soon, with Biden signaling he’ll end federal executions. 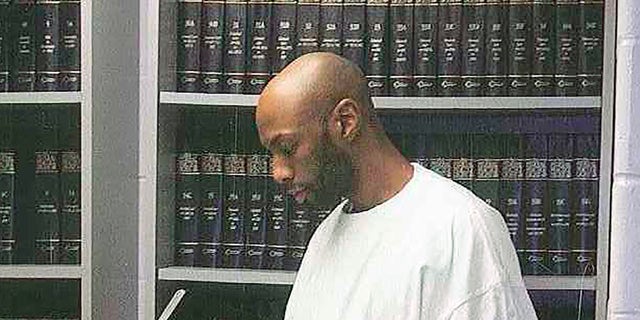 Dustin Higgs is seen at the Federal Prison in Terre Haute, Ind., in 2015. (Federal Bureau of Prisons/Community Federal Defender Office for the Eastern District of Pennsylvania via AP)

The only woman on death row, Lisa Montgomery, was executed Wednesday for killing a pregnant woman, then cutting the baby out of her womb and claiming it as her own. She was the first woman executed in nearly 70 years.

Federal executions began as the coronavirus pandemic raged through prisons nationwide. Among those prisoners who got COVID-19 last month were Higgs and former drug trafficker Corey Johnson, who was executed Thursday. Some members of the execution teams have also previously tested positive for the virus.

Not since the waning days of Grover Cleveland’s presidency in the late 1800s has the U.S. government executed federal inmates during a presidential transition, according to the Death Penalty Information Center. Cleveland’s was also the last presidency during which the number of civilians executed federally was in the double digits in one year, 1896, during Cleveland’s second term.

In October 2000, a federal jury in Maryland convicted Higgs of first-degree murder and kidnapping in the killings of Tamika Black, 19; Mishann Chinn. 23; and Tanji Jackson, 21. His death sentence was the first imposed in the modern era of the federal system in Maryland, which abolished the death penalty in 2013.

Higgs’ lawyers argued it was “arbitrary and inequitable” to execute Higgs while Willis Haynes, the man who fired the shots that killed the women, was spared a death sentence.

The federal judge who presided over Higgs’ trial two decades ago said he “merits little compassion.”

“He received a fair trial and was convicted and sentenced to death by a unanimous jury for a despicable crime,” U.S. District Judge Peter Messitte wrote in a Dec. 29 ruling.

In a statement after the execution, Higgs’ attorney, Shawn Nolan, said his client had spent decades on death row helping other inmates and “working tirelessly to fight his unjust convictions.”

“The government completed its unprecedented slaughter of 13 human beings tonight by killing Dustin Higgs, a Black man who never killed anyone, on Martin Luther King’s birthday,” Nolan said. “There was no reason to kill him, particularly during the pandemic and when he, himself, was sick with Covid that he contracted because of these irresponsible, super-spreader executions.”

Higgs’ Dec. 19 petition for clemency argued he had been a model prisoner and dedicated father to a son born shortly after his arrest. Higgs had a traumatic childhood and lost his mother to cancer when he was 10, the petition said.

“Mr. Higgs’s difficult upbringing was not meaningfully presented to the jury at trial,” his attorneys wrote.

Higgs was 23 on the evening of Jan. 26, 1996, when he, Haynes and a third man, Victor Gloria, picked up the three women in Washington, D.C., and drove them to Higgs’ apartment in Laurel, Maryland, to drink alcohol and listen to music. Before dawn the next morning, an argument between Higgs and Jackson prompted her to grab a knife in the kitchen before Haynes persuaded her to drop it.

Gloria said Jackson made threats as she left the apartment with the other women and appeared to write down the license plate number of Higgs’ van, angering him. The three men chased after the women in Higgs’ van. Haynes persuaded them to get into the vehicle.

Instead of taking them home, Higgs drove them to a secluded spot in the Patuxent National Wildlife Refuge, federal land in Laurel.

“Aware at that point that something was amiss, one of the women asked if they were going to have to ‘walk from here’ and Higgs responded ‘something like that,’” said an appeals court ruling upholding Higgs’s death sentence.

Higgs handed his pistol to Haynes, who shot all three women outside the van before the men left, Gloria testified.

“Gloria turned to ask Higgs what he was doing, but saw Higgs holding the steering wheel and watching the shootings from the rearview mirror,” said the 2013 ruling by a three-judge panel of the 4th U.S. Circuit Court of Appeals.

Investigators found Jackson’s day planner at the scene of the killings. It contained Higgs’s nickname, “Bones,” his telephone number, his address number and the tag number for his van.

Chinn worked with the children’s choir at a church, Jackson worked in the office at a high school and Black was a teacher’s aide at National Presbyterian School in Washington, according to The Washington Post.

On the day in 2001 when the judge formally sentenced Higgs to death, Black’s mother, Joyce Gaston, said it brought her little solace, the Post reported.

“It’s not going to ever be right in my mind,” Gaston said, “That was my daughter. I don’t know how I’m going to deal with it.”

Tags: 13th, Dustin, executed, Higgs, in
You may also like
Recent Posts