At least 66 people have died after a fire gutted a Covid ward at a hospital in Iraq.

More than 100 were also injured in the blaze which broke out in a ward attached to the al-Hussein Teaching Hospital in the city of Nasiriyah late Monday.

It comes less than three months after a similar fire caused by an exploding oxygen tank killed 82 and injured 110 at a hospital for Covid patients in Baghdad. 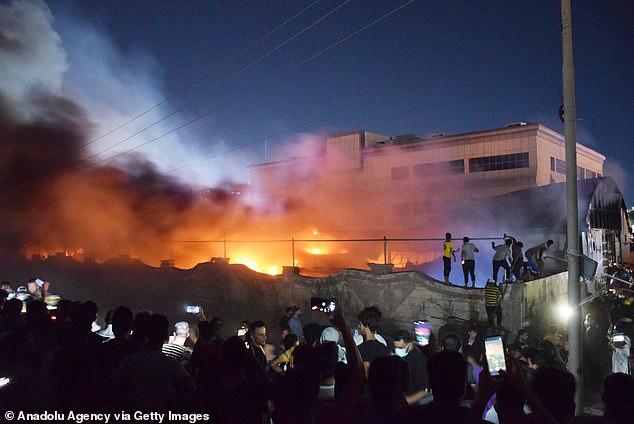 At least 66 people have been killed after a fire broke out in a ward for Covid patients in the city of Nasiriyah, southern Iraq, on Monday night 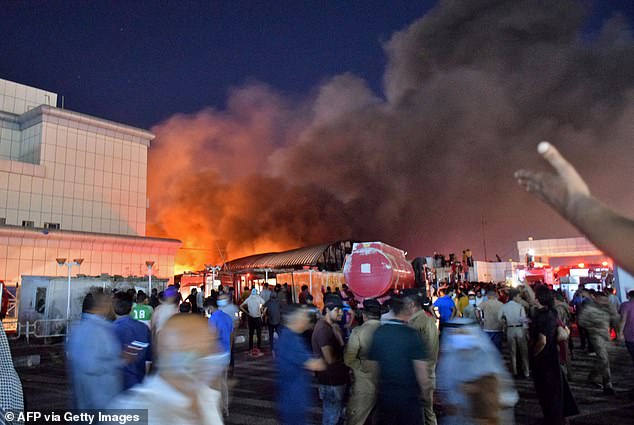 Hospital officials anonymously told journalists the fire was caused by an electrical short circuit and an exploding oxygen tank, without giving further details 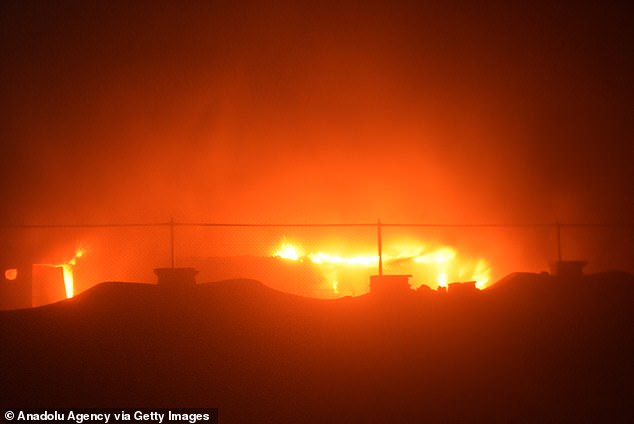 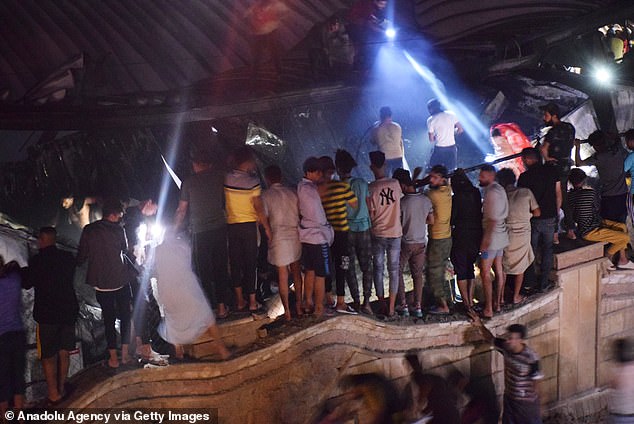 Fire crews raced to put out the blaze, but it was still burning early Tuesday with distraught relatives gathering at the site for news of their loved ones 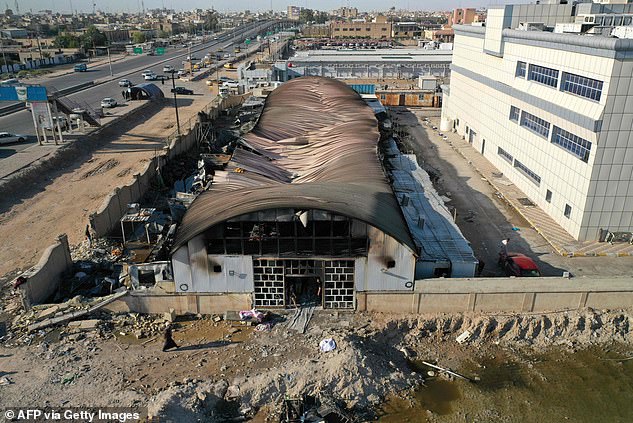 As day dawned on Tuesday the full extent of the damage to the building became clear, with the roof collapsed inwards

That fire prompted the resignation of the country’s health minister and led to angry protests, which began afresh after Monday’s blaze.

‘The political parties have burned us,’ demonstrators shouted while demanding ‘revolution’ and burning a police car outside the hospital.

Monday’s fire broke out in a temporary ward set up alongside the al-Hussein hospital which was being used to treat severely ill Covid patients.

The ward had space for 70 beds and had opened just three months ago.

Most of those killed were patients at the facility and either died of smoke inhalation or burns, rescue crews said.

The blaze continued to burn into the early hours of Tuesday morning before it was extinguished and rescue teams could move in.

There are fears the death toll could rise considerably once victims who were trapped inside the burning building are found.

Prime Minister Mustafa al-Kadhimi chaired an emergency meeting in the wake of the fire and ordered the suspension and arrest of the health director in Dhi Qar province, where Nasiriyah is located.

He also ordered the director of the hospital and the city’s director of civil defense to be suspended, and launched a government investigation.

An investigation launched after the last fire in Baghdad found widespread negligence and systemic mismanagement in Iraq’s hospitals.

At the time, the prime minister had ordered inspectors into other hospital to check for fire risks, though it is unclear exactly what action was taken.

On Monday, Ammar al-Zamili, spokesman for the Dhi Qar health department, told local media that there were at least 63 patients inside the ward when the fire began.

Maj. Gen. Khalid Bohan, head of Iraq’s civil defense, said in comments to the press that the building was constructed from flammable materials and prone to fire.

Iraq is in the midst of another severe COVID-19 wave. Daily coronavirus rates peaked last week at 9,000 new cases. 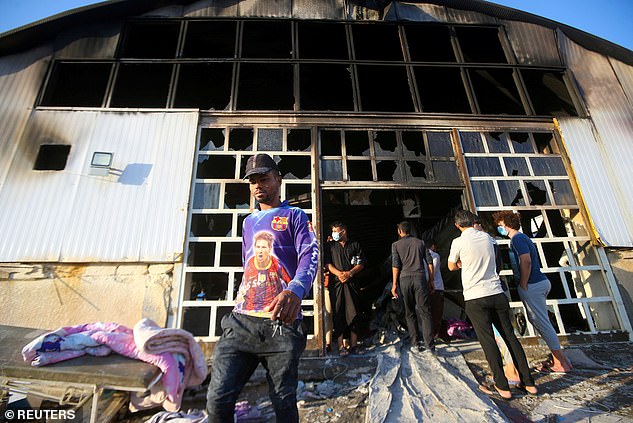 The entrance to the destroyed Covid ward is pictured the morning after the fire, with windows blown out from heat and smoke stains up the walls 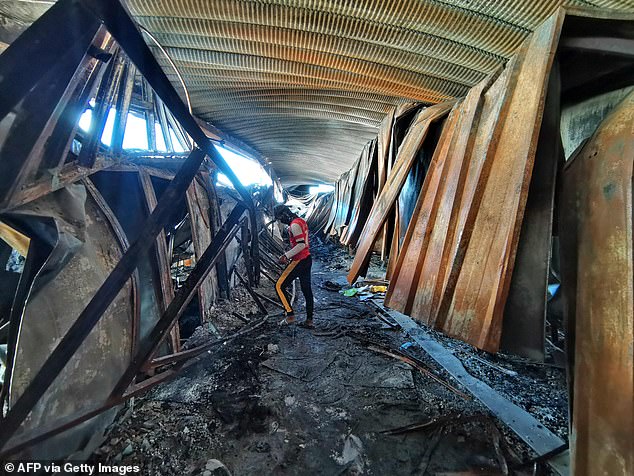 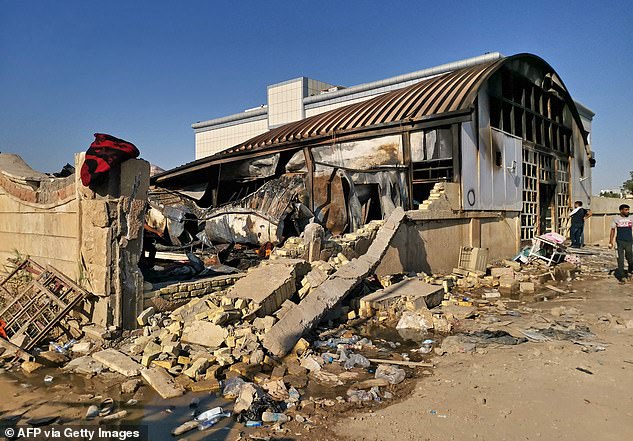 A damaged wall is seen next to al-Hussein hospital’s Covid unit, which was destroyed by fire 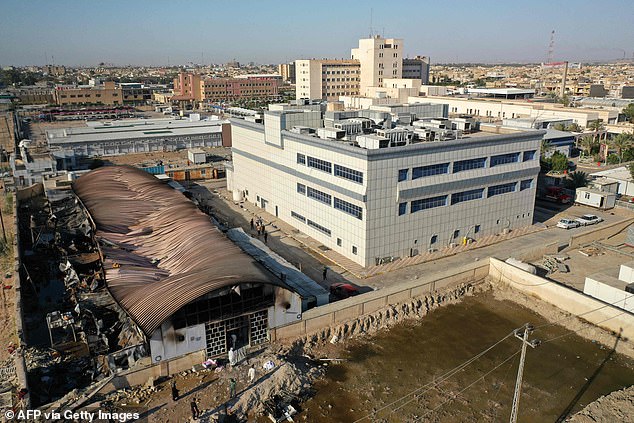 Tags: after, dozens, fire, killed, sweep
You may also like
Recent Posts