Home
World News
Doing my own research: why vaccine scepticism is an easy sell

“I think you should get vaccinated if you’re vulnerable,” Rogan said of the effort to increase vaccination rates for the coronavirus.

His reasoning? That “if you’re a healthy person, and you’re exercising all the time, and you’re young, and you’re eating well, like, I don’t think you need to worry about this.” 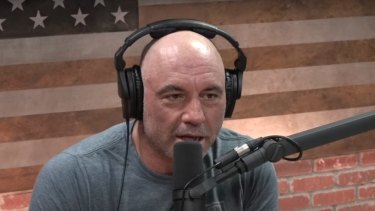 Joe Rogan is one of the superstars of podcasting.

During an appearance on the Today show on Wednesday, the country’s top infectious-disease expert Anthony Fauci disagreed with the former Fear Factor host.

“Well that’s incorrect, and the reason why is you’re talking about yourself in a vacuum then,” Fauci said. ” . . . You can get infected and will get infected if you put yourself at risk. And even if you don’t have any symptoms, you’re propagating the outbreak because it is likely that you – even if you have no symptoms – that you may inadvertently and innocently then infect someone else who might infect someone who really could have a problem with a severe outcome.” 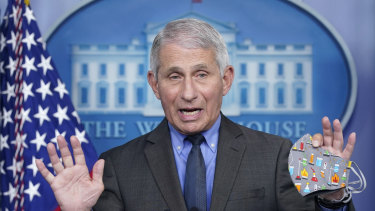 Dr Anthony Fauci, director of the National Institute of Allergy and Infectious Diseases, disagreed with Rogan.Credit:AP

That’s the central premise behind expanding vaccinations as widely as possible: remove the chance for the virus to gain a foothold anywhere. The more people who are vaccinated, the less likely it is that a sick person – whether they know they’re sick or not – will be able to infect someone else.

If Rogan catches the virus, he could spread it to someone vulnerable, like a young person with a preexisting condition. Or even just to another unprotected person, who then spreads it himself. The more windows you lock at the jewellery store, the less likely it is that a burglar can get in.

Kate Bedingfield, the White House communications director, was less measured than Fauci in her response to Rogan.

“I’m not sure that taking scientific and medical advice from Joe Rogan is perhaps the most productive way for people to get their information,” she said.

Yet they do. Rogan is an active promoter of nutritional supplements, with fans putting together extensive lists of what he purports to take. His website includes an ad promoting products by the company Onnit, including a supplement called “Alpha Brain.” In 2014, Rogan participated in what could be described as an infomercial for Onnit, touting the company’s products. Those looking to buy Onnit products can use the promotional code “ROGAN” for 10 percent off.

So “Alpha Brain,” which is “crafted with earth-grown nutrients like Bacopa, Cat’s Claw, Oat Straw, and Huperzia Serrata to help you realise your limitless potential” and retails for only a little more than a dollar per capsule, is something that Rogan encourages his listeners to use.

A vaccine developed by a major pharmaceutical company aimed at curtailing a global pandemic? Well, it’s time to be cautious.

Part of this is that a default position of scepticism for pundits is both easier to defend and less likely to blow up in your face. It’s much safer for an elected official or media personality to simply say “no” or “I’m not sure about that” to proposals than it is to embrace them. It’s also easier: one can say “I don’t think so” without poking around at all whereas offering an endorsement necessitates at least some homework. 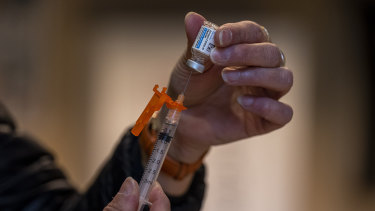 A healthcare worker draws a dose of the Johnson & Johnson vaccine. Some people think it’s not for them.Credit:Bloomberg

But a bigger part of it is that, in a world where media confidence has consistently eroded over the past several decades, there is a large audience for those who purport to be making their own independent evaluations of situations.

When I would talk to QAnon adherents at rallies for President Donald Trump over the past few years, I was regularly told that they were doing their own research and not taking the media’s word for anything. That research led them to embrace wild conspiracy theories, but that was a feature, not a bug.

People like reporters for The Washington Post are seen as hopelessly biased and pushing an agreed-upon narrative whereas people like Rogan or the anonymous “Q” are encouraging people to think for themselves – after a little push in a certain direction. And, in Rogan’s case, with the help of a cognition-boosting supplement.

Scepticism is good and one should critically evaluate the information being received. But what often happens is that “thinking for oneself” becomes a proxy for “believing what I want to believe.” And that, as it turns out, is a good way to generate attention and money.

Rogan’s podcast has a lot of benefits beyond this particular approach, but it’s safe to say that many of his most fervent fans ascribe to it. Last year, Rogan signed an agreement with Spotify to host his podcast through their service, a deal worth more than $US100 million.

Rogan has been criticised in the past for offering misinformation, as when he falsely claimed that left-wing actors were setting fires in Oregon – something he claimed was “not widely being reported.” (Which was true, since the claim was false.)

He later apologised for those comments, admitting that he was “very irresponsible” for sharing the claim without evidence. His vaccine scepticism seems likely to have been born of a similar instinct, though: questioning the agreed-upon story.

That’s different than someone like Alex Berenson, the former New York Times reporter who evolved over the past year from a sceptic of efforts to contain the coronavirus to a rabid opponent of vaccination programs.

His pandemic-focused approach has led to a large following on social media and constant Fox News appearances. This fall, he’s releasing a book about the pandemic called Pandemia; it will likely not offer an embrace of the official systems for addressing the coronavirus.

Earlier this month, The Atlantic’s Derek Thompson rebutted Berenson’s claims about the vaccine one after the other. It was a thorough assessment of all of the ways in which Berenson had been proven wrong or made false claims, but it dissuaded Berenson not one bit.

He continues on the same path, offering his followers the same sort of think-for-yourself-just-like-me rationales for doing things like avoiding getting a shot or wearing a mask. As you might have guessed, Berenson is a frequent guest on Tucker Carlson’s Fox News show, a platform where “reject the consensus no matter the evidence” has been elevated to new heights.

But it’s also easy to see why “the government is lying to you” is a more appealing message than “the government makes some good points about having fewer people die.” There are a lot more action movies with sympathetic protagonists that take the first approach than the second.

This is compounded by the fact that the skeptic’s information economy bears faster rewards than community-level immunity to the virus. More vaccines means a faster return to normal . . . eventually. West Virginia is taking a novel approach to this, offering younger people savings bonds for getting vaccinated – a financial benefit now (sort of) instead of later. In most places, though, the pitch is less direct: let’s all get back to normal.

That’s tougher sell than “by rejecting the vaccine you’re part of an elite group of free-thinkers.” So it often sells poorly.

Tags: Doing, my, own, research, vac, Why
You may also like
Recent Posts