The Covid-19 diaries: Retired asthmatic microbiologist, 71, reveals what it is REALLY like caring for her 62-year-old husband as he beats killer disease – and how lonely it can be

Paul Jones, a 62-year-old accountant from Southam, Cheltenham, tested positive for Coronavirus in March after returning from a work trip to Derbyshire.

His wife, Geraldine, 71, who is herself asthmatic and in a high-risk group, refused to take him to hospital, vowing to care for him at home instead.

She kept a diary throughout the ordeal. In these moving extracts, Geraldine reveals what it is like to battle the virus alone – and win.

12 March: Paul came home from work yesterday complaining of feeling unwell. It seemed like he had a mild cold. He had no cough, but I slept in the spare bedroom just in case.

13 March: He worked at home, eating normally and drinking wine with his evening meal. His temperature was slightly rising but he said he didn’t feel that bad. Slept well.

14 March: Paul woke up and said he was feeling much better. We decided that he should work from home again anyway. We ate a good lunch and I was relieved. In the evening, he said he didn’t feel good, then – WHAM – he said it was like being hit with a hot wrecking ball. He looked bad: red eyes, ruddy face, shivering but hot and clammy. He didn’t want any supper which was unlike Paul, as he loves his food.

15 March: Today he didn’t get out of bed and his temperature rose to 37.8C (100F). He said he felt awful and he looked awful too. I tried to get him to drink all day, which wasn’t easy as all he wanted to do was sleep.

At this point I should tell you I am an ex-microbiologist. I know what a virus can do to your body. I had had the Hong Kong flu in 1969, which killed a million people. As an asthmatic, I cannot get this new illness. Paul needs me.

16 March: Still no cough but a very high temperature. He has lost his appetite, eating only two Weetabix all day, and was completely exhausted. It was as if sleep had overcome him. Even getting him to drink and take Paracetamol was not easy. I’ve already had one husband die in a road accident in 1983. Paul is not going to be the second. 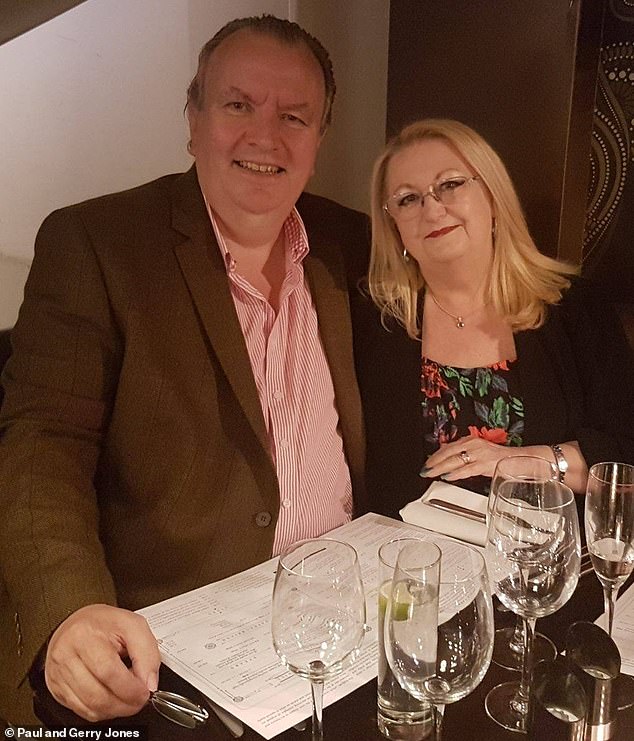 Paul Jones, left, and Geraldine Jones, right, from Cheltenham, before he contracted Covid-19. Geraldone kept a diary throughout his illness 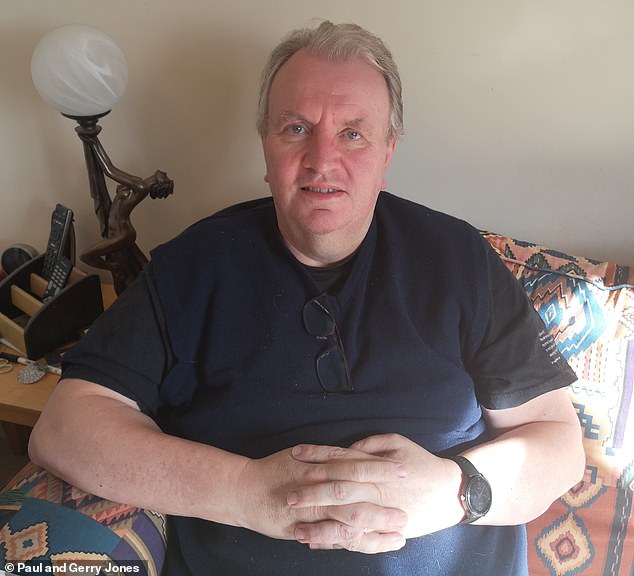 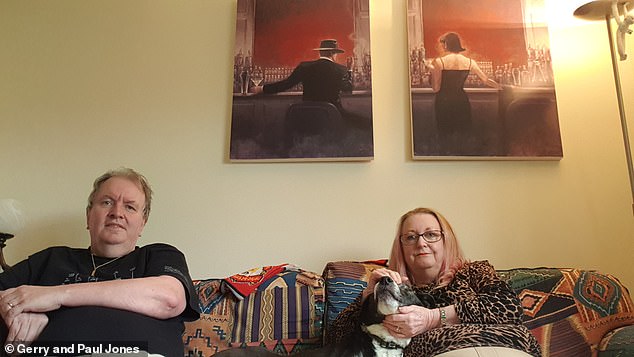 Paul, left, and Geraldine, right, with Dylan the dog, on 1 April after Paul recovered from coronavirus. They are maintaining a social distance from each other

17 March: I am not getting much sleep. We are being told by the Government that after seven days of isolation, you can go out. We are on day six and he can just about get out of bed to go to the toilet.

Today – BANG – his temperature went up above 40C (104F). Paracetamol every four hours did not have much effect. I kept telling him to sit up to protect his lungs, but he yelled at me that he just wanted to sleep.

I am in despair. It’s like a bad joke: he was fit and healthy and I was the one at risk.

18 March: Cough intermittent. Temperature hovering around 40C (104F). Paul hasn’t eaten anything at all today. He blames his loss of taste and smell, and said his tea tasted like sick. He still refused to sit up, which could be a game changer for his lungs. I must get him to drink, as I noticed his urine was quite dark.

I am feeling isolated. With my sick husband asleep, I opened some Prosecco. Paul normally does the cork bit but never mind, I could do that. I drank three glasses.

My only outing has been walking my dog Dylan, which is like winning the lottery. I’ve had the odd chat from a distance but there are not many people around these days and no cars. It’s so different to last week when the Cheltenham festival was on. Everything is quiet now, only the birds singing. Oh, was that a plane I saw in the sky?

19 March: Pretty much the same as yesterday. High temperature, ruddy face, chills but hot. Loss of taste and smell – the Weetabix always needed more sugar on it. He didn’t speak to me much except to ask for water. He was also angry, angry with me and himself. He told me he didn’t know why he couldn’t control the virus, why was he not getting any better? What can I do to make him better?

Death is everywhere. The headlines. This deadly virus, how many died today, how many caught it. It’s just like the Eighties, when Aids was a death sentence. The media is now highlighting the fit and healthy young people who have died. 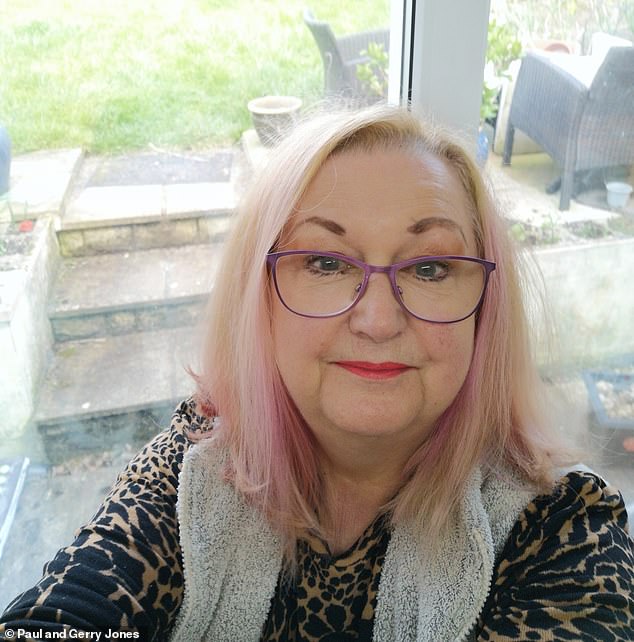 Geraldine Jones, 71, cared for her husband at home while vowing not to take him to hospital 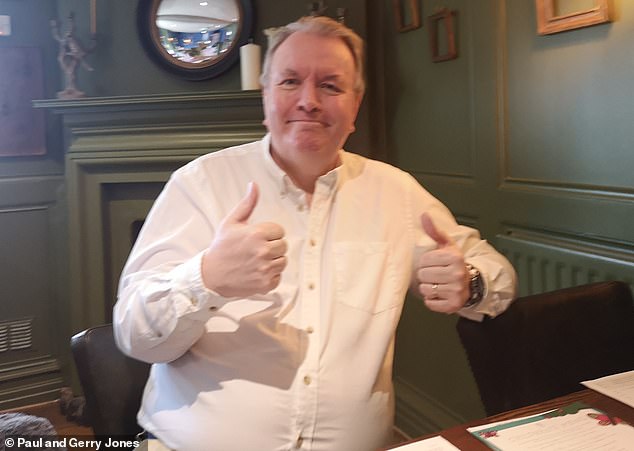 Mr Jones, an accountant, picked up the killer virus when on a work trip to Derbyshire. Here he is pictured before contracting the virus 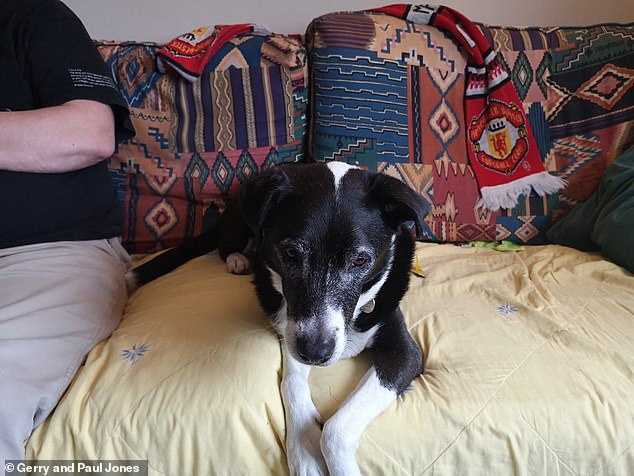 Dylan the dog, whose walks provided Geraldine with some much-needed respite

20 March: At about 9pm, his temperature climbed to over 40C (104F) and said he could not take a deep breath. When I looked at him, I could see fear in eyes. That’s when I phoned 111. It took ages to get through but I hung on. I described his symptoms, answered their questions and they said yes, it probably was covid-19. A doctor called back later and said he was 99.9 per cent sure that it was coronavirus. He told Paul that he would get over this as he was fit. That was enough for him to let go of the fear in his head.

21 March: Paul is still very ill. His temperature is still high, and he’s so weak. Today he could hardly stand but he wanted clean sheets on his bed. My microbiology brain came zooming in and I told him to put them in the washing machine himself, at 95 degrees. Goodbye, you horrible corona viruses. Every time I asked him to sit up, he told me to stop nagging him. Did this mean he was getting better?

22 March: Neighbours are still bringing supplies to my doorstep. I had three separate neighbours bring me various basics. How wonderful, what great neighbours I have.

Paul had suddenly asked for orange juice, so that was delivered to our doorstep along with some bread, eggs and milk – and, oh yes, some choccy biscuits. Still can’t get a food delivery slot, have been trying now for ages.

Paul’s temperature was 38C (100.4F) today. While he was sleeping I stood beside his bed. The bedside cabinets were strewn with empty paracetamol packets, a thermometer, two empty glasses and a water jug. I quietly put them in a bag and took them downstairs to the dishwasher. Then I scrubbed my hands for 20 seconds in hot water.

23 March: Paul is much better today. He’s eating more and we both can see the light at the end of the tunnel. His temperature virtually down to normal, but he’s very, very weak. I have so many great comments on my Facebook page. It has been so comforting to know that so many others are going through the same thing, that we are all scared, all in the same boat with this virus swimming alongside us. 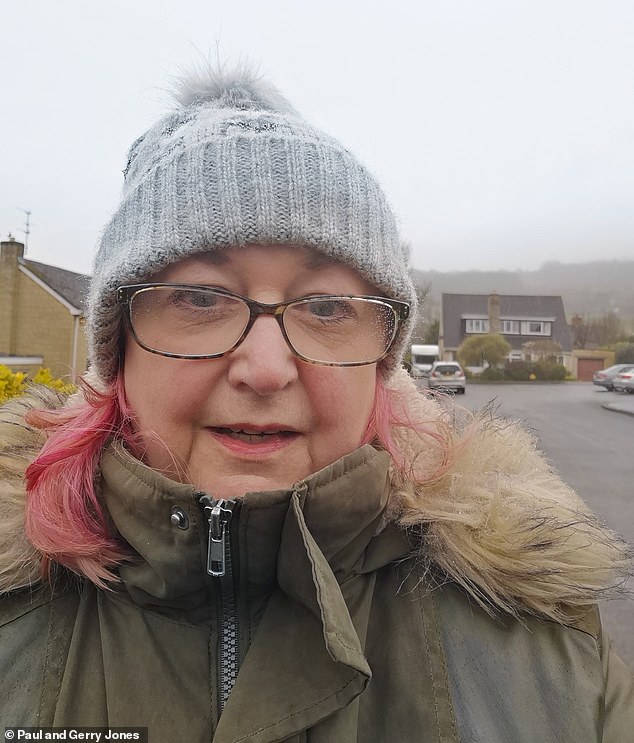 Geraldine, a former microbiologist, had the experience and determination required 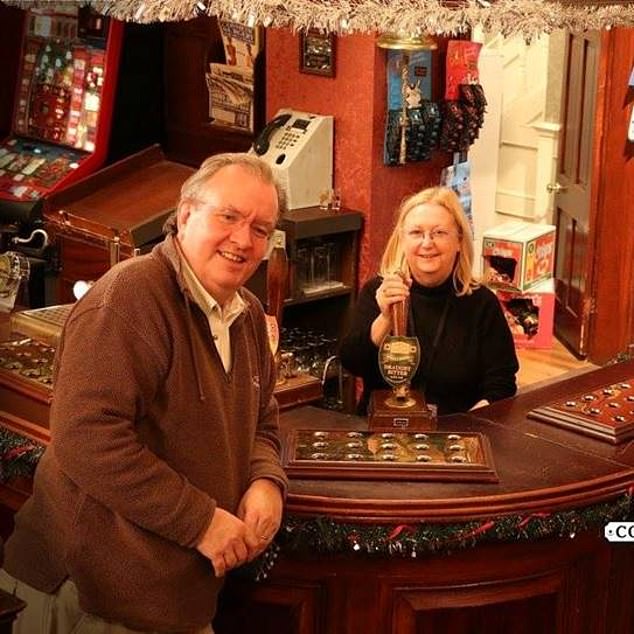 Paul, left, contracted the disease on 12 March and it took him more than two weeks to recover. Here he is pictured before falling ill

24 March: This morning, Paul went downstairs and sat on the sofa, as he felt he could not get enough oxygen in his lungs. He opened a large brown packet that he thought was a new cereal, only to find that with milk it tasted awful. No wonder – it was dried yeast flakes for bread making!

This morning he was lying in bed, complaining he couldn’t breathe, which was worrying. He said that he felt stuffed in his lungs, which is how I sometimes feel being an asthmatic.

Many people have asked how I have kept symptom free. Well, I may go over the top on some things, but if I take Paul’s plates and cups downstairs, I put them in a bag, with my latex gloves on, then straight into the dishwasher. Clothes bedsheets, I have asked him to wash his own towels and bedsheets at 95 degrees and his clothes at 65 degrees – tough if they shrink! I wipe down all door handles and taps at night before bed, and I have bought some sterilising tablets to keep his toothbrush free of germs.

25 March: Last night, Paul was a bit breathless and restless.

I admit I had a bit of a hangover this morning, as my delivery of 12 bottles of red wine arrived. Heaven.

This morning HE SAID HE FEELS GREAT. Still very weak, but he has turned the corner. 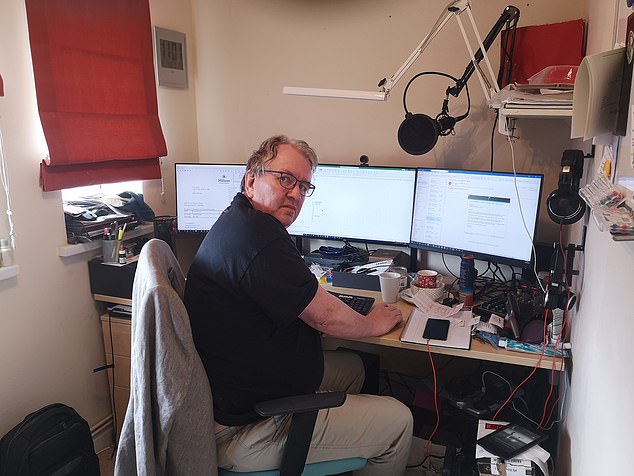 Paul, pictured today, is now trying to work from home but gets breathless walking upstairs.

1 April: Paul is almost through it now. He still pants when he walks up the stairs and he’s still weak, as he didn’t eat for such a long time.

And he can’t concentrate for long periods, though that is improving.

Overall, he feels like he’s been hit by a steam train. But he’s working from home again, and he’s on the mend.

It will take a couple of weeks for him to get anywhere close to where he was before he came down with the virus.

Thank you so much everyone for reading this. Please, please, please be positive if you have the virus, as the mental side is so strong.

Remember, Paul had very mild symptoms for about three days, then – WHAM – the hot wrecking ball hit. He has been through his worst ever illness but he has come out the other side.

None of us know the long-term effects of this illness. Everyone, please stay indoors if you can. Stay safe.