Home
World News
Councils in 'catastrophe': Town where HALF workers 'to be furloughed'

Councils in ‘catastrophe’: Town where HALF of workers face being furloughed pleads for Government help amid warnings local authorities face a £5bn budget black hole triggered by coronavirus

Leaders of the UK town predicted to suffer the biggest economic hit from the coronavirus pandemic have issued an urgent plea for help from the Government.

More than 50 per cent of jobs in Crawley are at risk of being lost or furloughed, according to a recent report.

There are fears the West Sussex town, close to Gatwick Airport, could experience an ’employment catastrophe’ as the economy ‘most affected’ by the Covid-19 lockdown.

It comes as councils are facing a £5billion cash shortfall caused by the ongoing pandemic.

Liverpool City Council yesterday joined Windsor and Maidenhead Council in warning it may file for bankruptcy and Highland Council in Scotland reported an £80million hole in its finances. 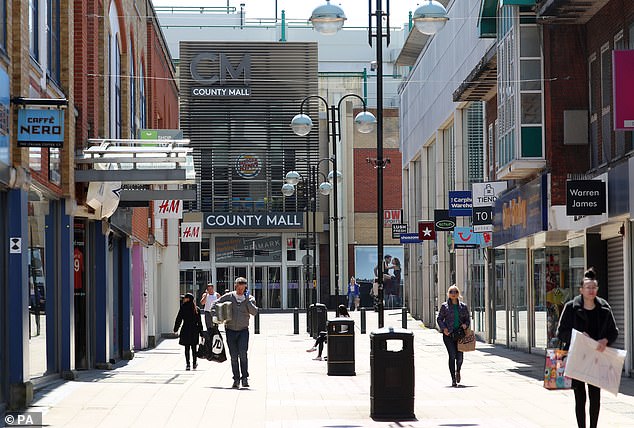 More than 50 per cent of jobs in Crawley (pictured on Friday) are at risk of being lost or furloughed, according to a recent report

Crawley borough council leader and the town’s MP called on the Government to take rapid action and ensure the town’s ‘amazing economic success is not lost in a matter of weeks’.

The letter states: ‘It is quite clear that the impact of the Covid-19 crisis on the national economy and indeed the world economy is unprecedented.

‘However, due to the business sectors located within the town, and the proportion of local jobs and economic output from these sectors, Crawley is undeniably being hit far harder than any other part of the United Kingdom.

‘These sectors include aviation, transportation, retail/wholesale, leisure and hospitality, all of which are likely to continue to struggle long after the lockdown is lifted.’

It is feared up to 57 per cent the town’s workforce could be made unemployed, the letter says, referring to a recent Centre for Cities report. 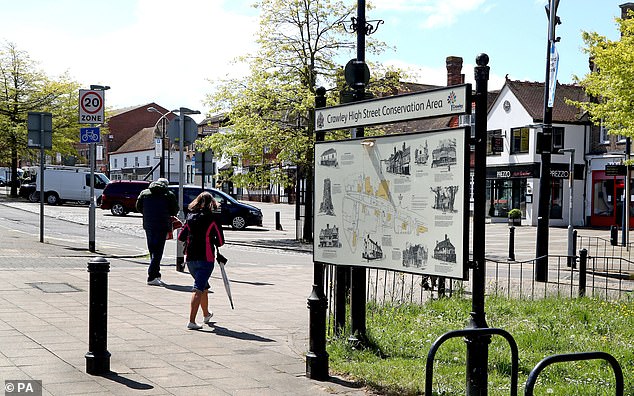 There are fears the West Sussex town (pictured on Friday), near Gatwick Airport, could experience an ’employment catastrophe’ as the economy ‘most affected’ by the lockdown

The letter continues: ‘It is critical that the Government takes urgent action, working with Crawley Borough Council and other local and regional stakeholders, to draw up, fund and implement a programme of targeted economic relief and investment in the town.’

Peter Lamb, leader of Crawley Borough Council, said the town generates £124 million in business rates each year for the Government.

He added: ‘We’ve been helping the public purse for decades – it’s now time for the Government to repay that help.’

Local Tory MP Henry Smith said: ‘The Crawley and Gatwick economy has been an undoubted success story for many years but the Covid-19 pandemic threatens to negatively impact the area perhaps more than any other UK-wide.’ 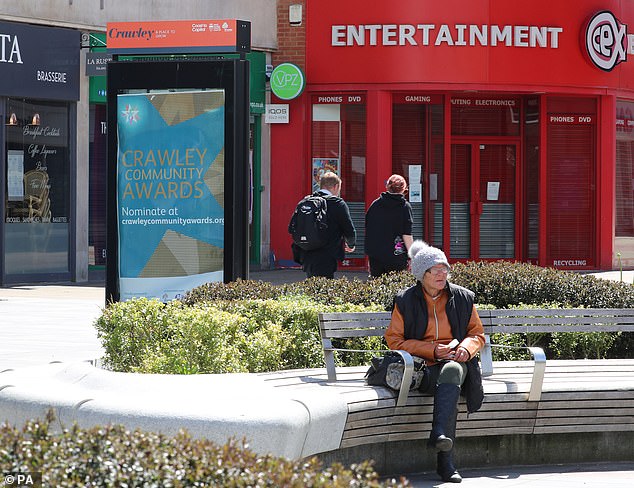 Critics have said local authorities should look to make cuts to ‘sky-high’ council boss salaries before going to the government to plug the £5billion black hole.

Data seen by the Guardian showed public services are in a financial mess and a number of councils in England are on the verge of bankruptcy.

Analysis compiled by the largest 44 authorities in the country showed by the end of the financial year they will be £2.2billion in the red.

If spending and losses at all councils continue to mount the predicted shortfall will be £5billion.

Liverpool Council got £34million from the government but said yesterday its expenses have gone up by £78million due to extra spending to support residents amid the crisis.

It is the second council to warn of bankruptcy after Windsor and Maidenhead Council on Wednesday said it is considering issuing a section 114 because of the loss in tourism money this year.

When a section 114 is issued it means councils cannot spend money on anything except safeguarding vulnerable people and statutory services.

Liverpool Mayor Joe Anderson said: ‘We simply will no longer have enough income to meet what we are spending.’

He claimed Liverpool is in the dire situation because the government has allocated money to councils based on population instead of need. 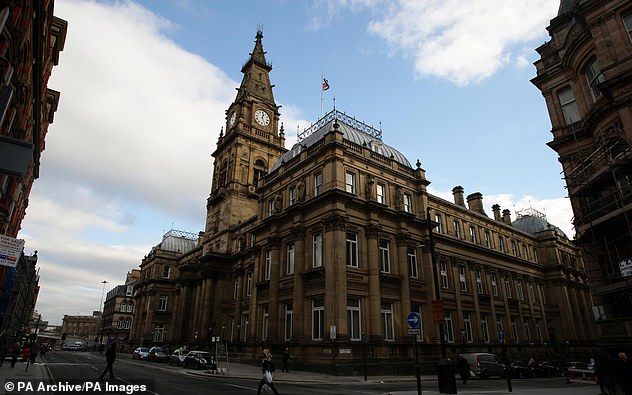 Highland Council in Scotland is another to announce a budget shortfall, saying there will be a £80million hole in its finances due to the pandemic.

Earlier this year it formed plans to tackle a budget gap of £20.5million, but top brass warned the shortfall could quadruple due to the economic uncertainty of Covid-19.

The Dingwall and Seaforth representative said officers are preparing a full impact analysis to figure out exactly how much cash will be lost.

Highland economist Tony Mackay said there was no doubt the council’s finances will take a hit – but he believes the £80million figure ‘seems very high’.

He said: ‘The actual deficit will obviously depend on how long the coronavirus epidemic lasts.

‘Council tax losses are understandable because many local residents who have lost their jobs/incomes will understandably have great difficulty paying their taxes. I expect the Scottish Government to compensate the council for these losses.’

Opposition councillors demanded Mr MacKinnon explain how he arrived at the £80million estimate.

Ness-side councillor Ron MacWilliam said he had no idea ‘how that size of budget shortfall could even be conceivable’ as he accused the administration of hiding behind red tape to avoid scrutiny.

He said: ‘I am outraged at the secrecy, and the public statements coming out of resilience meetings.

‘I have strong reason to suspect that the people making these decisions are in breach of the Local Government Act.’

Independent councillor Andrew Baxter also demanded more information, saying most councillors were ‘in the dark as to the real state of council finances’.

He said: ‘We’ve received no more detail than the few figures dropped into a council press release and the platitudes spouted during a weekly virtual briefing.

‘We are told the council is preparing for recovery and renewal but we are provided with no information.

‘Decisions that will impact the Highlands for years to come must be questioned,’ added Mr Baxter.

Tags: &apos;catastrophe&, Councils, in
You may also like
Recent Posts