Florida Gov. Ron DeSantis’ decision to transport dozens of Venezuelan migrants to the  elite Massachusetts enclave of Martha’s Vineyard unannounced achieved its unspoken purpose of riling up the left.

But the stunt could have unplanned ramifications for DeSantis and the GOP writ large, experts told USA TODAY.

“At first blush, (DeSantis’ decision to send the migrants) is dehumanizing and deceptive propaganda without much in the way of rational policy formulation or meaningful engagement with the federal government,” said Mark Schlakman, an immigration law professor at Florida State University who served as an immigration consultant to President George W. Bush’s administration. “This actually has the potential to backfire in a very substantial way.”

A group of about 50 Venezuelan migrants were flown from Texas to Martha’s Vineyard this week on two charter flights for which DeSantis has taken credit. USA TODAY later learned the migrants were told they would be met with well-paying jobs, free housing and transportation once they got off the planes. Instead, when the migrants arrived, Massachusetts officials were surprised and unprepared, with no such promises in sight.

A spokesperson for DeSantis said the migrants’ relocation was part of the governor’s “promise to drop off undocumented migrants in progressive states.”

“There’s also going to be buses, and there will likely be more flights,” he said in Daytona Beach. “But I’ll tell you this, the Legislature gave me $12 million. We’re going to spend every penny of that to make sure that we’re protecting the people of the state of Florida.”

The governor was referring to $12 million the Florida Legislature appropriated this year to cover the cost of transporting migrants out of Florida if they are apprehended at the border and brought to the state. 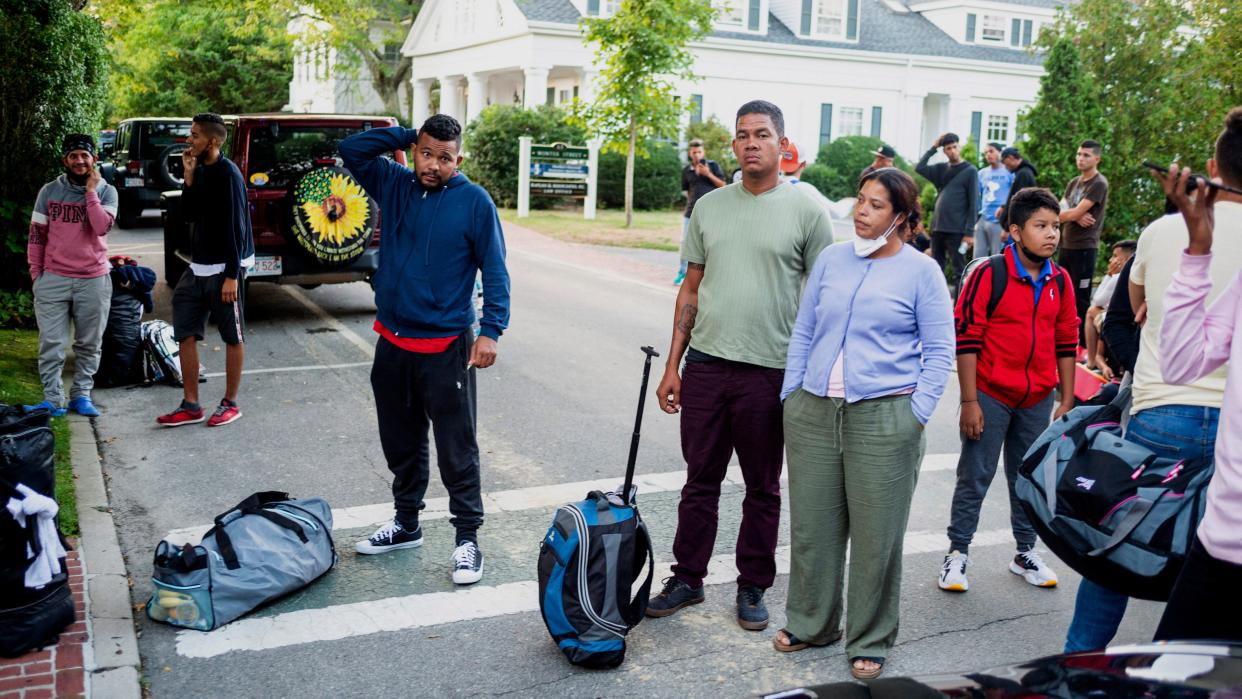 The tactic to fly migrants north shows DeSantis is caught between two imperatives, says William LeoGrande, a government professor at American University with expertise in U.S. foreign policy toward Latin America: On one hand, the Florida GOP wants to cultivate the Venezuelan American vote. But on the other hand, DeSantis and the broader GOP see immigration as a “wedge issue.”

“Right now, DeSantis is opting to focus on the wedge issue, even at the expense of Venezuelan Americans,” LeoGrande said

Venezuela has been governed by a socialist government since 1999. As politics there became increasingly polarized under former Venezuelan President Hugo Chavez and now Nicolás Maduro, more Venezuelans are emigrating to the U.S.

While the population of Venezuelan Americans is much smaller – and less politically powerful – than Florida’s influential Cuban American population, the community has grown by at least 54% since 2015, making it one of the fastest-growing Latino groups in the U.S.

“(Venezuelan Americans) have become not a huge voting bloc, but a very active voting bloc,” LeoGrande said. “I think what the Florida Republican Party is trying to do is re-create the Cuban American phenomenon. That is to say, get in early and build political links to this exile community, which is what they did with the Cuban Americans (which) has been very successful.”

Last year, the administration granted 343,000 Venezuelans already in the United States Temporary Protected Status, or TPS, in March 2021. It allows them the chance to legally live and work in the country for 18 months. It has since been extended to March, 10, 2024.

Many of those Cubanand Venezuelan migrants who achieved U.S. citizenship vote for American Republicans, who promote a right-wing anti-socialist Latin American policy that resonates with those voters. 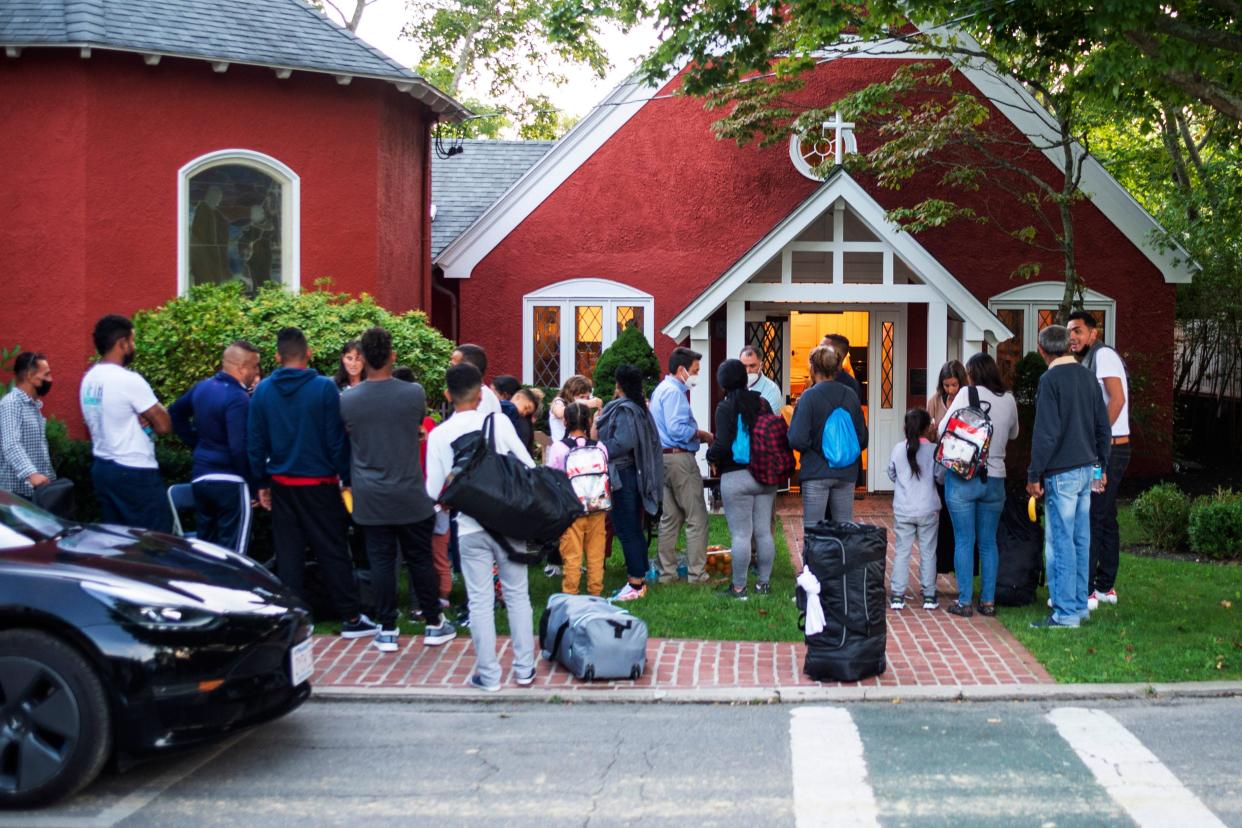 Florida Sens. Marco Rubio and Rick Scott have advocated for the Biden administration to crack down on the activities of Venezuela’s government, and Rubio’s office in March helped migrants from Venezuela, as well as Haiti and Ukraine, apply for temporary protected status. Plus, the Republican National Committee last year opened a Hispanic Community Center in Doral, Fla., a city inhabited by a large Venezuelan population.

“Going silent or not weighing in – just letting that dust settle, so to speak – is not exactly bold leadership,” Schlakman said. “It seems to be valuing propaganda above the life circumstances of, in this case, the Venezuelans and other people who are fleeing persecution from many other places in the world.”

In response to USA TODAY’s request for comment, Scott said that DeSantis sending migrants north was his way of drawing attention to the border crisis’ effect on Florida, himself advocating for securing the border.

“What was wrong in Martha’s Vineyard is about a small, like minuscule fraction of the problem being carried by just a handful of states,” said Rubio, a Miami-area Republican whose parents emigrated from Cuba, during an appearance in West Palm Beach. “Most states are taking on 90% of the burden of uncontrolled illegal immigration.”

The migrant relocation and subsequent silence from Republican lawmakers could have ramifications for the state’s Republican leaders who are counting on the Venezuelan vote less than two months away from November’s midterm elections.

“Is is this kind of action by DeSantis enough to pull them away from that Republican identification?” LeoGrande said. “Probably not. I think DeSantis is wagering that it will not.

“But it might it might lead some Venezuelan Americans to say, ‘Well, a pox on both your houses. I don’t want to vote for either of these parties. And for some Venezuelans who came to the United States and are not from a wealthy background … it’s possible that they might be attracted by some of the Democrats’ support for social programs.”

The issue could play a role in DeSantis’ bigger plans, which many suspect includes a 2024 presidential run.

The Florida governor is among the top Republican names for potential presidential contenders in 2024, and one of a handful thought to pose a serious challenge to former President Donald Trump, should he choose to run again. Texas Republican Gov. Greg Abbott, who has also sent migrants to safe haven states, has also been floated as a potential 2024 presidential contender.

“Gov. Abbott has gotten a lot of press attention out of bussing migrants north to blue states, and I think DeSantis wanted to get in on the action – after all, they’re potential rivals for the 2024 Republican nomination,” LeoGrande said. “I also think he was enjoying trolling the Democrats, or ‘owning the libs,’ so to say.”

“But it’s a deeply cynical ploy,” he added, “using men, women and children as as political pawns to score media points.”