The firm has conducted more than 200 such audits over 13 years in business. “Our level of comparison data is unmatched,” Keir Holeman, a Clear Ballot Group vice president, wrote to the Republican-controlled Senate. He never heard back, he says.

Instead, the state Senate hired a small Florida-based cyber security firm known as Cyber Ninjas that had not placed a formal bid for the contract and had no experience with election audits. Senate President Karen Fann says she can’t recall how she found the firm, but her critics believe one credential stood out: Cyber Ninjas’ chief executive officer had tweeted support for conspiracy theories claiming Republican Donald Trump, and not Democrat Joe Biden, had won Maricopa County and Arizona.

Now the untested, little-known cyber security firm is running a partly taxpayer-funded process that election experts describe as so deeply flawed it veers into the surreal. Its chief aim, critics say, appears to be testing far-fetched theories, rather than simply recounting votes — an approach that directly undermines the country’s democratic traditions. 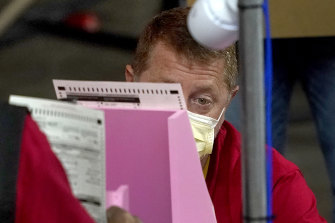 Maricopa County ballots cast in the 2020 general election are examined and recounted by contractors working for Florida-based company, Cyber Ninjas.Credit:AP

“If I give you 20 M&Ms, and you want 30, you can keep counting it, but you did not get 30 M&Ms,” said David Becker of the Center for Election Innovation and Research, a former Department of Justice voting rights attorney and elections expert. “This is not an effort to find the truth.”

Experienced vote counters have watched the process in shock. Arizona Secretary of State Katie Hobbs, a Democrat, said this week Maricopa County will need to replace all of its election machines because their security has been permanently compromised by the auditors. Experts note the review isn’t following standard recounting procedures and, unlike at other election audits in Arizona, members of each major political party are not at each table observing the counting.

The auditors are checking for bamboo fibres to test a theory that tens of thousands of fake ballots were shipped from Asia. A onetime treasure hunter who claims to have invented a new method to automatically spot ballot fraud says his technology is being used in the review.

It’s become too much for some Republicans. The Maricopa County Board of Supervisors, all but one of whom are Republicans, this week accused Republicans in the Senate of having “rented out the once-good name of the Arizona Senate” to “grifters”.

“Your ‘auditors’ are in way over their heads,” the board wrote in a letter.

Cyber Ninjas’ defenders say they’re creating a template for a re-examination of the election in every battleground state Biden won. Trump allies have already called for similar operations in Georgia. And criticisms about the firm’s lack of election experience are hollow, its advocates argue, because the Arizona audit is unprecedented.

“This is an audit like none that has ever been performed,” said Patrick Byrne, the former chief executive officer of Overstock.com who has been raising money for the audit. “This audit is an audit check for all forms of mischief.”

The man running the operation, Cyber Ninjas chief executive officer Doug Logan, declined through his spokesman to be interviewed. He has only answered questions from reporters in public once, during a contentious press conference last month.

“There’s a lot of Americans here, myself included, that are really bothered at the way our country’s being ripped apart right now,” Logan said. “If we go through here and we don’t find any fraud, I will be ecstatic.”

Maricopa County has already conducted two audits, which found no problems with the count in the state’s most populous county. At the urging of Trump supporters, the Senate insisted on a third and subpoenaed more than 2 million ballots from the county.

When the Senate leader went looking for an elections firm to do the work, she did not put together a formal request for proposal, as is typical for government contracts. Fann said she and her staff reached out to several firms and got two bids back — the one from Clear Ballot Group for $US 450,000 ($582,000) and the other from a cyber security group called Intersec Worldwide. Fann said she preferred the Intersec proposal, but balked at an $US8 million ($10 million) price tag.

In an interview, she said she could not recall who had referred her to Cyber Ninjas. “To be honest with you, I can’t even tell you exactly what path led me there,” Fann said. 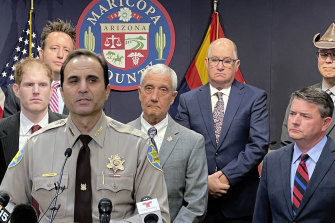 Maricopa County officials have directed the Arizona Senate and the auditors it hired to review the county’s 2020 election count to preserve documents for a possible lawsuit.Credit:AP

But Fann had tapped into a loose network of computer security experts who had become active in pro-Trump election conspiracy theories.

Logan, 42, in December had tweeted and retweeted references to the conspiracy theory that voting machines were hacked to switch votes from Trump. “The parallels between the statistical analysis of Venezuela and this year’s election are astonishing,” Logan tweeted, with a #StoptheSteal hashtag that referenced the pro-Trump movement seeking to overturn the election.

Logan also served as an expert witness in a pro-Trump lawsuit raising conspiracy theories about the election in Antrim County, Michigan. Another cyber security professional who filed an expert witness affidavit in that case, Ben Cotton, was a partner on the Intersec proposal. Cotton’s own firm, CyFIR, which did not respond to a request for comment, is now a subcontractor on the Arizona audit.

The Senate agreed to pay Cyber Ninjas $US150,000 ($194,000) in state money, but it is not clear how much more the audit will cost and who is paying for it. The pro-Trump One America News Network raised $US 150,000 ($194,000) in a single day in April and has continued to ask for donations. Byrne has also started a fundraising drive with a group that says it has raised $US 1.7 million ($2.2 million). Neither will have to disclose donors or account for how the money is spent, and Logan has declined to detail financial information.

Logan started Cyber Ninjas in 2013 in Indiana after working for two years for a cyber security firm called Cigital, according to his LinkedIn profile and Cyber Ninja press releases. He moved his firm from Indiana to Sarasota in 2014, according to the Cyber Ninjas website, which quotes Logan describing the firm as a “Christian company”.

At a public presentation last week, Logan cited as part of his qualifications that his firm “worked with some of the largest names in the financial services space”. Two of the companies he lists as former clients in his expert witness statement, Citibank and JP Morgan Chase, said through spokespeople that they have no record of hiring Cyber Ninjas.

Logan’s scant public record before the audit was a history of volunteering for the US Cyber Challenge, a training event for internet security amateurs and professionals. In 2015, Logan received an award from the security firm SANS for volunteer work with the event.

A spokesman for the US Cyber Challenge did not respond to repeated requests for comment.

Logan is not the only person associated with the effort to overturn the 2020 election who is working on the audit. Jovan Pulitzer, an inventor who unsuccessfully pushed for a post-election audit in Georgia, has said his technology is being used to detect altered ballots.

Pulitzer is also a former treasure hunter and author of a series of books on lost treasures, including one titled How to Cut Off Your Arm and Eat Your Dog. In 2000, he developed a barcode scanner called Cuecat that purported to link print magazine ads to the internet. It was later named one of the 50 worst inventions of all time by Time magazine.

Tags: Conspiracy-fuelled, firm, still
You may also like
Recent Posts