Coronavirus patients are able to keep in touch with loved ones thanks to iPads bought with money raised by Captain Tom Moore.

People unable to receive hospital visitors have been given the devices after the 100-year-old war veteran raised £32million for NHS charities by walking 100 laps of his garden.

More than £20million raised by Captain Tom, who was promoted to Honorary Colonel on his birthday last week, has already been handed out by NHS Charities Together.

It was split between 225 hospital charities to improve life for patients and health staff, and will be spent on comfortable seating areas, staff water coolers, coffee machines, food and toiletries. 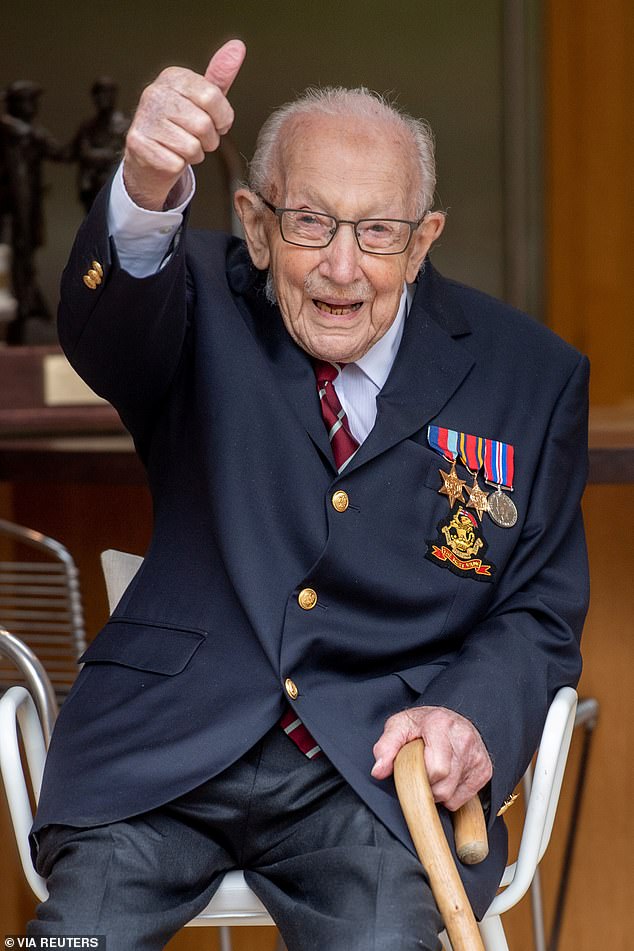 Funds have also been spent on counselling sessions and hotel rooms for NHS workers staying away from home to protect vulnerable family members.

Ian Lush, chairman of NHS Charities Together, said: ‘The incredible amount of money raised by Colonel Tom Moore is already reaching the frontline and making huge improvements to the daily lives of patients and NHS staff. We are not about replacing Government funding, it is about enhancing what is there, paying for better fixtures and fittings and things that are non-essential items in terms of health care but that are nice to have.

‘The money the British public has so generously donated in the last four weeks will have a lasting legacy for years and make a huge difference to the well-being of staff and patients.’

Before the pandemic, NHS Charities Together, an umbrella organisation for more than 200 small charities which raise money for individual hospital trusts, was little known.

It had three employees and an income of £300,000 last year, but since its Covid-19 Urgent Appeal was launched in March, it has raised £83million.

To cope, it has drafted in more workers, including administration staff who have been furloughed from hospitals in Birmingham.