Up to 12,000 tonnes of ammonium nitrate is being stored near homes in a busy Australian industrial town, sparking fears of a Beirut-style mega blast.

At least 135 people have died and a further 5,000 were injured when 2,750 tonnes of ammonium nitrate blew up in Lebanon early on Wednesday AEST, with the death toll expected to rise.

Just three kilometres from Newcastle, north of Sydney, up to 12,000 tonnes of the same chemical is stored at the Orica Plant in Kooragang – 800m from suburban homes in North Stockton.

At least 300 residents in the Stockton Community Action Group have long been calling on the government to relocate the plant or reduce the stockpiles of the deadly chemical. 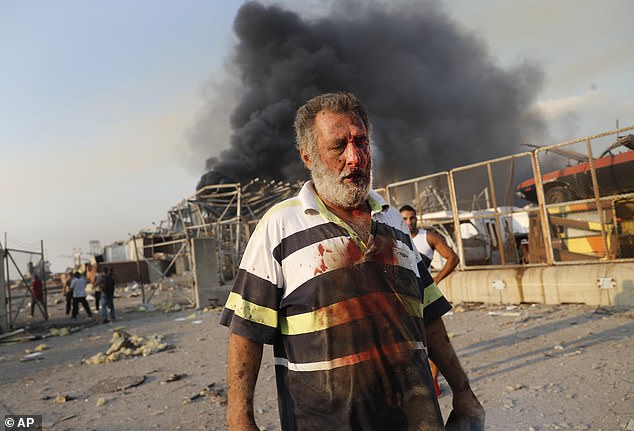 An injured worker walks at the explosion scene that hit the seaport of Beirut, Lebanon 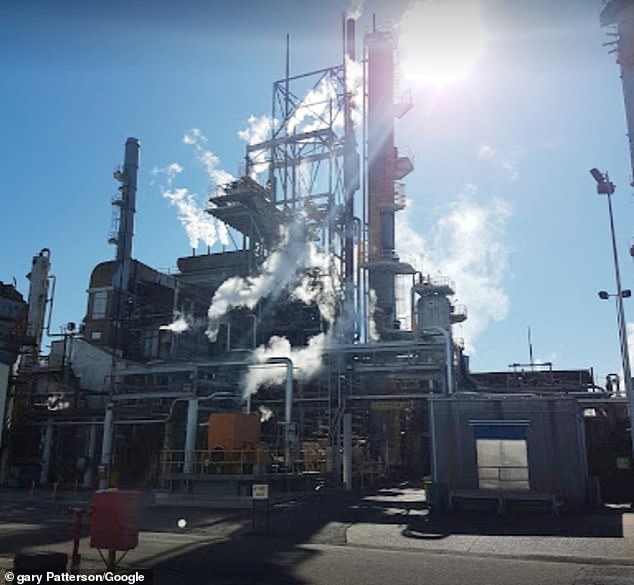 Just three kilometres from Newcastle on the New South Wales north coast, up to 12,000 tonnes of the same chemical is stored at the Orica Plant in Kooragang (part of the plant pictured) 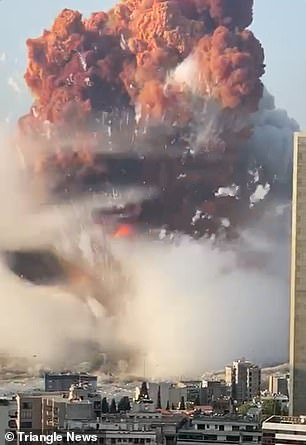 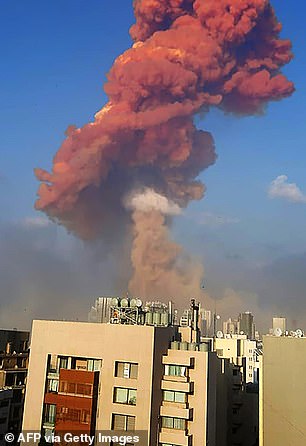 Residents in neighbouring suburbs, including Mayfield and Tighes Hill, have expressed similar concerns over the explosive’s proximity to homes.

‘That factory is only three kilometres from Newcastle’s CBD and only 800 metres from North Stockton residents,’ chemical engineer and community campaigner Keith Craig told ABC.

‘It’s a totally inappropriate place to have such a dangerous material produced and stored, and it’s something we’ve been complaining about for many, many years.’

He said he had no doubt ‘many people would be killed and injured if we had an accident at Orica’. 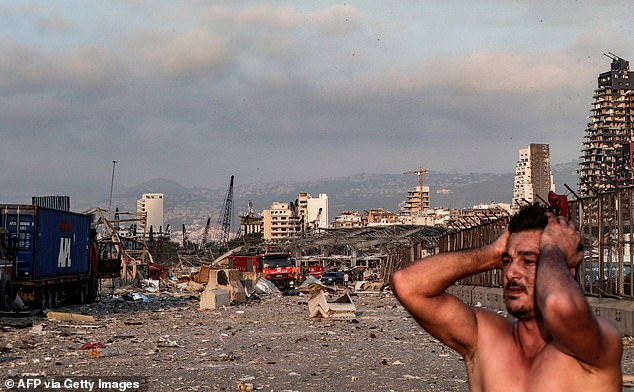 A man reacts at the scene of an explosion at the port in Lebanon’s capital Beirut on August 4. The same chemical which caused the explosion is also housed near Newcastle, on the NSW north coast 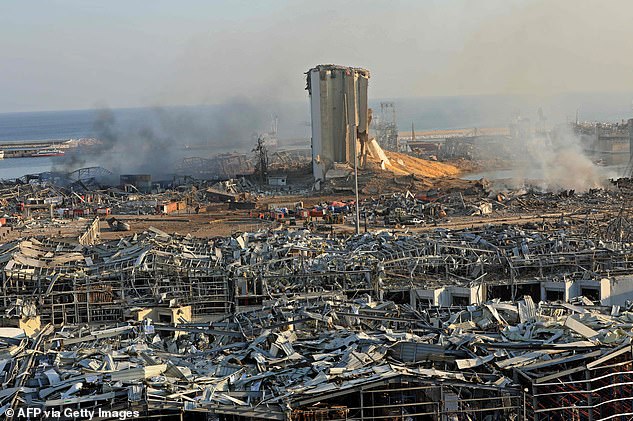 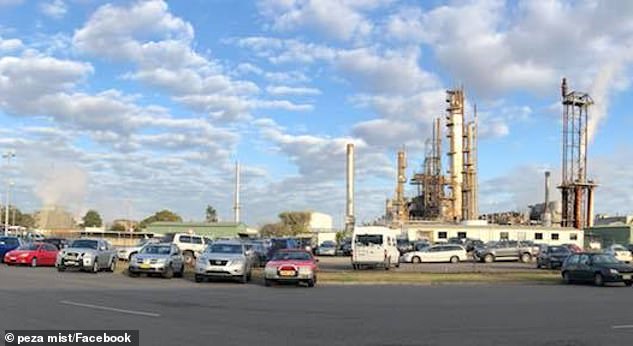 The plant (pictured) is just three kilometres from the Newcastle CBD and 800m from North Stockton – which is a major concern for locals, particularly after the latest explosion 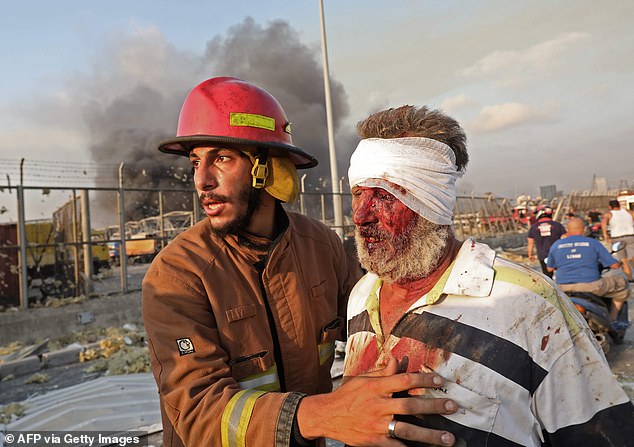 Pictured: A wounded man is helped by a fireman near the scene of an explosion in Beirut

But a spokesman for the company said stringent protocols are maintained and drills are completed annually alongside emergency services to ensure the product is being managed safely.

‘It’s important to note that there has not been a single incident involving the storage of ammonium nitrate in the Kooragang Island site’s 51-year history,’ the spokesman told Daily Mail Australia.

The ammonium nitrate is stored in areas of the complex which are fire resistant and built from non-flammable materials to minimise any threats.

‘There are no flammable sources within designated exclusion zones around these areas,’ the spokesman said.

The site is regularly inspected by the NSW Environment Protection Authority to ensure compliance with the licence conditions.

‘Recent inspections have not identified any significant concerns with respect to chemical storage at ammonium nitrate storage facilities,’ EPA said in a statement.

Community groups have cited multiple past incidents involving the chemical which have resulted in loss of life. 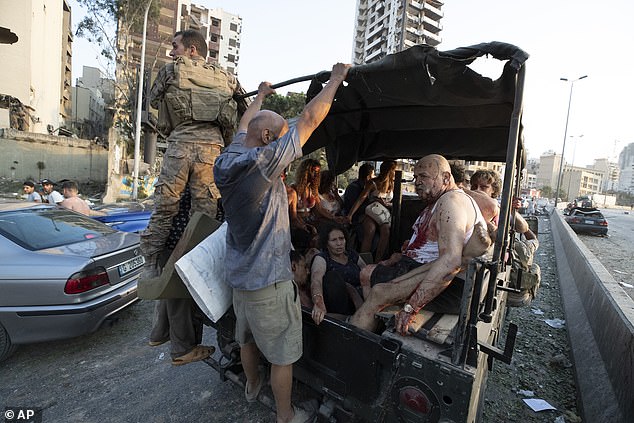 Pictured: Army soldiers evacuate injured people from the site of the explosion in Beirut. Similar explosions have also occurred in France and the United States

In 2001, 29 people were killed in Toulouse following an explosion at a French fertiliser factory.

Similarly, 15 people were killed in Texas in the United States following a 2013 explosion.

Both blasts involved about 300 tonnes of ammonium nitrate – much less than the 6,000 to 12,000 tonnes stored in Orica at any given time.

Early indications have suggested that the explosion in Beirut was set off by nearby welding work.

The chemical, which is used in fertilisers and bombs, had reportedly been stored at the port for six years without correct safety measures.

Witnesses reported windows being shattered and buildings damaged 10km from the blast area.

At least one Australian is among the 135 dead, and others have come forward to share details of the horror explosion. 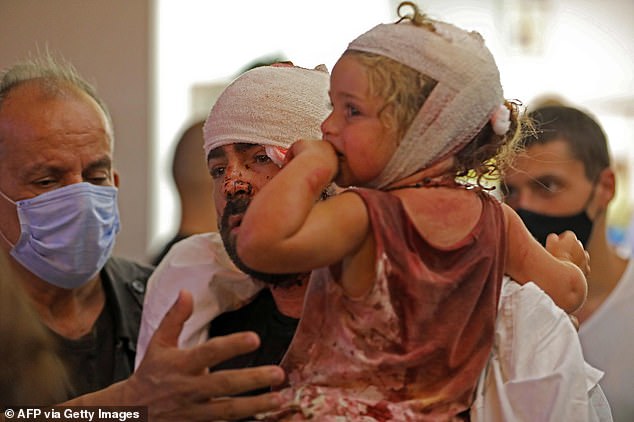 Wounded people are treated at a hospital following the explosion, which has left hundreds of casualties in Beirut last night 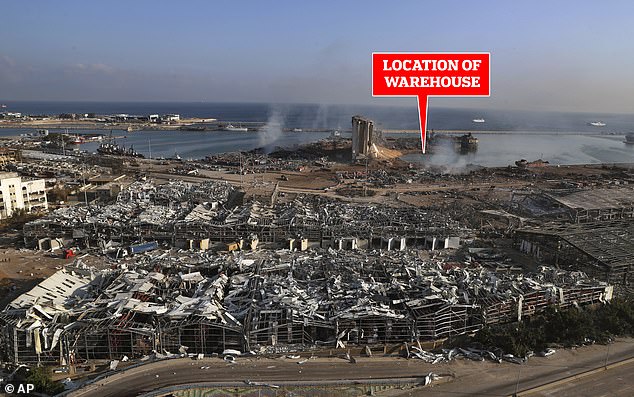 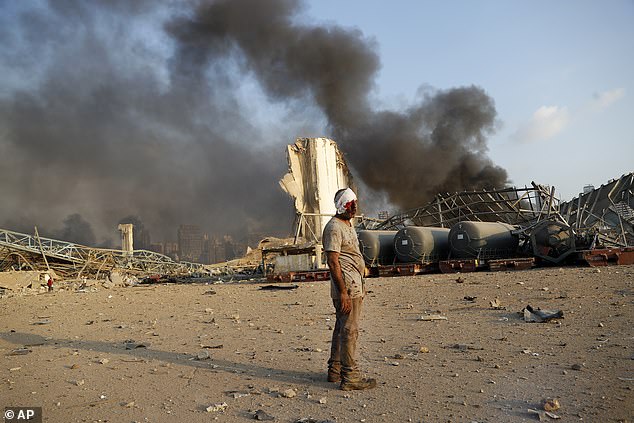 An injured man waits for help at the explosion scene that hit the seaport. So far, 135 people have been confirmed dead, but that figure is expected to rise

Omair Jheir, from Sydney, was relaxing at his apartment in the Lebanese capital at the time of the explosion.

‘The sheer magnitude of it was more powerful than anything I have ever experienced. I was thrown against the wall, bruising my ribs, and my house just collapsed around us,’ Mr Jheir told The Daily Telegraph.

The 41-year-old – who owns a now destroyed hotel, restaurant and coffee shop close to the port – frantically tried to find medical help as he walked over dead bodies and watched buildings collapse around him.

‘My friends, my neighbours, my customers, they were just ripped apart. There was blood gushing out of their faces. There were people on the floor dead. It was devastating,’ he said.

‘I was not wearing shoes and there was glass everywhere. My feet were cut to ribbons as I walked down the street.’

Mr Jheir created a makeshift bandage out of sheets to protect his feet before he and a friend went in search of a hospital. 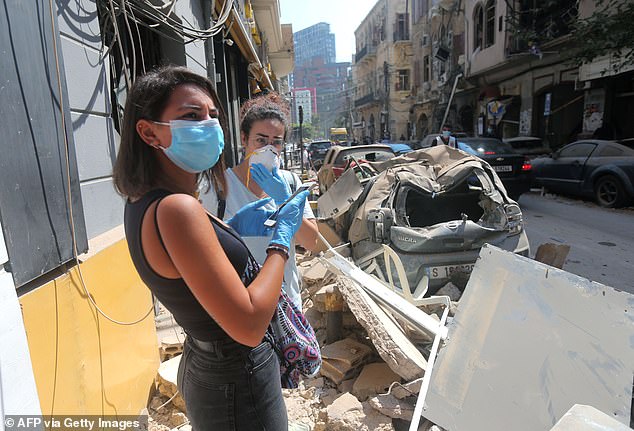 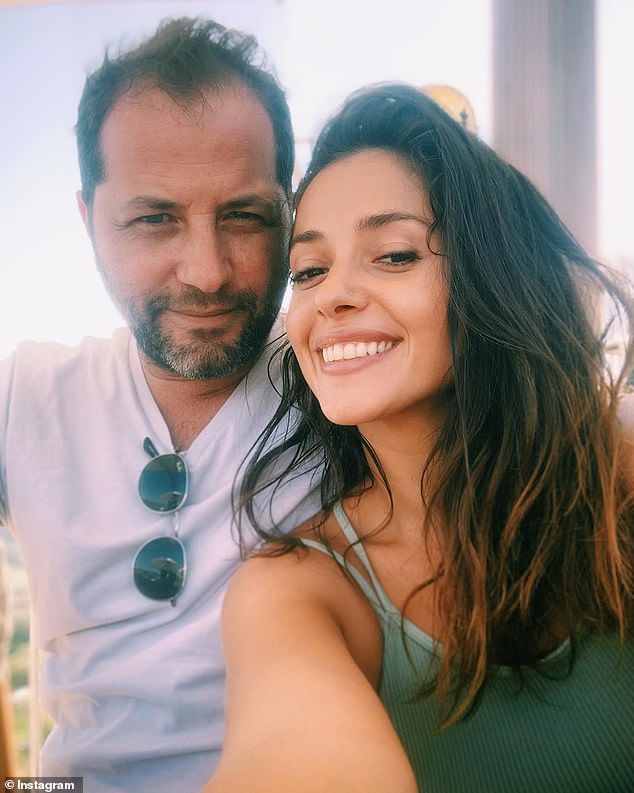 But the nearest medical centre was flattened and the next three were already overwhelmed by patients.

He was finally able to get help after presenting to a fifth facility, then drove two hours north where he was admitted to a hospital in Tripoli.

Mr Jheir suffered serious abrasions to his face and body, as well as a broken arm.

His three businesses on Gemmayze Street were completely destroyed.

His yoga instructor wife Hala Okeili was lucky to avoid the worst of the blast.

‘I was reaching home when [the port exploded]. I was lucky to be two minutes away,’ Ms Okeili said.

‘In five minutes, I lost my home and everything in it, I almost lost my husband. Thank God he survived the… massive destruction,’ she wrote. 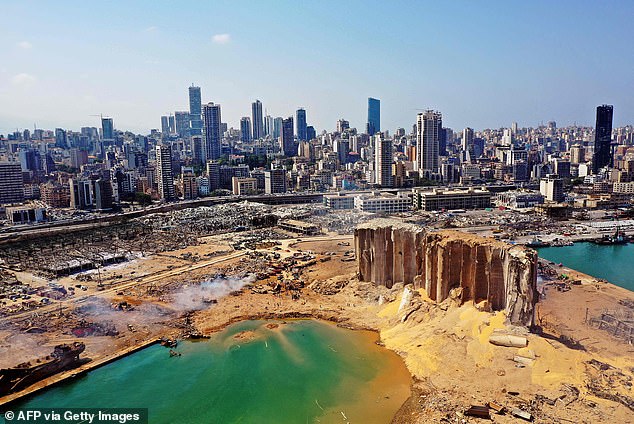 A drone captures the devastation wrought by the explosion, including a watery crater (bottom left) where the warehouse containing the explosive chemicals previously stood 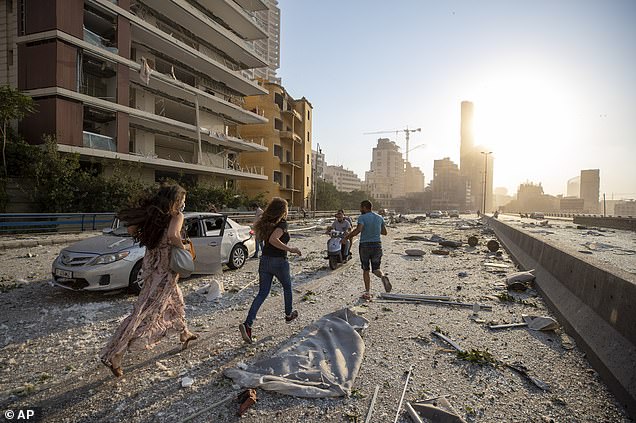 ‘The yoga studio is extremely damaged, my cat who means the world to me is missing.

‘The entire street we live in is down to ashes… many have died… our lives as we know it are gone. What more is left!?’

‘Our house is gone. The studio destroyed. But we’re alive. It’s really tough times, so thank you for all your solidarity. God be with those who lost their lives. God be with their parents.’

The pair had only returned to Lebanon a month ago after a dream wedding in Sydney.

Photos from the day show the happy couple smiling as they shared the moment with friends in front of the Sydney Harbour Bridge.

Ammonium nitrate – identified as the cause of the deadly explosion in Beirut – is an odourless crystalline substance used as a fertilizer that has been behind many industrial explosions and terrorist attacks over the decades.

Two tonnes of it was used to create the bomb in the 1995 Oklahoma City attack that destroyed a federal building, leaving 168 people dead, and it has been widely used by the Taliban in improvised devices.

Experts say a fire in Beirut started after a spark from a welder likely ignited the highly reactive chemical, causing a blast the equivalent to three million kilotons of TNT, killing at least 100 people and leaving thousands more injured.

There were 2,750 tonnes of the hazardous chemical held in the warehouse at the time of the explosion – which measured as the equivalent of a 3.5 earthquake.

Death and injury from the explosion would have come in a number of phases, according to Dr David Caldicott from the Australian National University.

‘Primary injuries are blast-related, as a consequence of the overpressure wave interacting with the hollow space in victims; lung injuries are often survived, but subsequently fatal, and bowel injuries are common.

‘Tertiary injuries are as a consequence of being thrown by the blast, and quaternary injuries by other features such as inhalation.’

When combined with fuel oils, ammonium nitrate creates a potent explosive widely used in the construction industry, but also by insurgent groups to create bombs.

As well as the Oklahoma City bomb in the US, it has been used in a number of IRA attacks on the UK.

These include the Bishopsgate attack in April 1993 that left 40 injured and a 40ft wide crater, and a 3,300lb bomb in Manchester in June 1996 that left 2000 injured but no deaths due to a phone warning an hour before the blast.

In agriculture, ammonium nitrate fertiliser is applied in granule form and quickly dissolves under moisture, allowing nitrogen to be released into the soil.

However, under normal storage conditions and without very high heat, it is difficult to ignite ammonium nitrate, Jimmie Oxley, a chemistry professor at the University of Rhode Island, said.

‘If you look at the video (of the Beirut explosion), you saw the black smoke, you saw the red smoke – that was an incomplete reaction,’ she said.

‘I am assuming that there was a small explosion that instigated the reaction of the ammonium nitrate – whether that small explosion was an accident or something on purpose I haven’t heard yet.’

That’s because ammonium nitrate is an oxidiser – it intensifies combustion and allows other substances to ignite more readily, but is not itself very combustible.

For these reasons, there are generally very strict rules about where it can be stored: for example, it must be kept away from fuels and sources of heat.

In the United States, regulations were tightened significantly after the Oklahoma City attack, with inspections required if more than 2,000lbs of it are stored in one place.

Prime Minister Scott Morrison said the Australian embassy in the Lebanese capital had been ‘significantly impacted’ but staff escaped without major injuries.

‘It’s my deep regret to inform you that one Australian has been killed in this horrific blast,’ he told Nine Network.

Mr Morrison said there were usually about 20,000 Australians in the Lebanese capital but he was unsure how many had returned to Australia because of the coronavirus pandemic.

‘Our hearts really go out to our Lebanese Australian community,’ the prime minister said.

‘I know there will be many prayers in the churches and the mosques in Australia but given the COVID restrictions, I would just urge the appropriate response.’

Australia has already dedicated $2 million in humanitarian support to Lebanon to help with the recovery.

The funding will consist of $1 million each to trusted aid partners, the World Food Program and the Red Cross movement, to help ensure food, medical care and essential items were provided to those affected by the tragedy.

‘Australia and Lebanon have a strong relationship built on extensive community ties, with more than 230,000 Australians having Lebanese heritage. This tragedy will affect many people in both countries,’ Foreign Minister Marise Payne said. 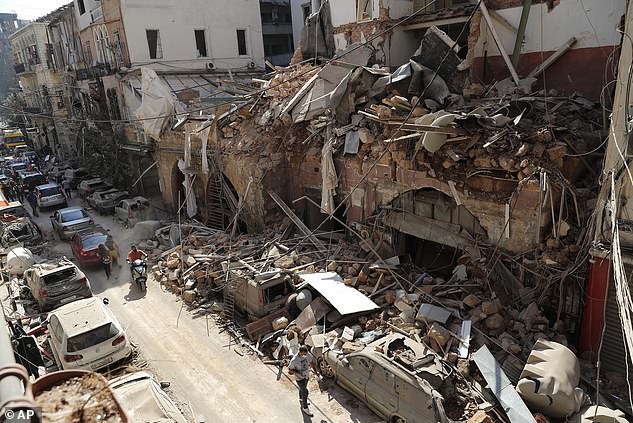 Cars and buildings were torn apart during the blast