Workers at a Chinese company have been forced to gobble down live earthworms as punishment after failing to achieve their sales goals, according to reports.

Social media footage uploaded by a self-proclaimed employee shows a staff member holding the wiggling bug in her palms as another worker wolfed it down with water while covering her mouth in disgust. 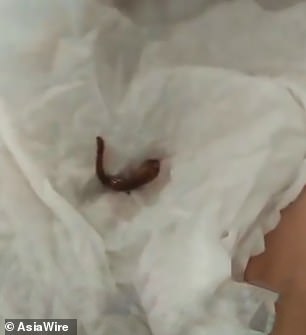 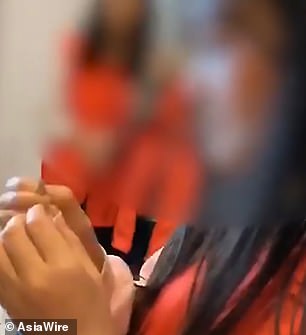 Workers have been forced to stomach live earthworms as punishment for underperforming and failing to achieve their sales goals at a company in China. Pictures above show the screenshots of the video leaked by one of the company’s employee over the weekend

A manager said that the bizarre punishment was part of the company’s new disciplinary policies which had been agreed by all staff members.

Local officials told the press that they are investigating the incident.

The video reportedly was filmed last Monday at an interior design company in Bijie, Guizhou province of south-western China.

Members of the company’s sales team are captured on camera standing in a line at a staff meeting as they receive the cruel penalty.

One female worker can be heard asking: ‘Does it have parasites?’

Another staff member comments: ‘It sometimes explodes in your mouth when you bite it.’

A screenshot released by the local press shows a chart titled ‘The third stage penalty list’, detailing different types punishment the company workers are assigned to.

Some of the staff initially believed the new policy was ‘only a joke’, according to Guiyang Web.

The employees could choose to be fined with 500 yuan (£57) and buying breakfast for the whole company.

But many could not afford the fine and resorted to eating worms instead.

The worker who leaked the video said that they called police after receiving threats from the company for uploading the viral footage.

Local officials said that they are carrying out an investigation for the incident.

A spokesman for the Qixingguan District Bureau of Market Regulation told The Paper: ‘We’re investigating the incident, but I have no details to disclose.

‘The results of the investigation will be published by the district government when it is concluded.’

Tags: are, Chinese, Employees, forced, t
You may also like
Recent Posts