China reports another 48 imported cases of coronavirus, putting an end to four days of declines

China reported 48 new cases of coronavirus today, all of them imported – putting an end to four days of declines.

The figures reverse the trend of recent days after 67 cases were reported on Thursday, 55 on Friday, 54 on Saturday, 45 on Sunday and 31 on Monday.

There were no new cases in the original virus epicentre of Hubei province, although one patient died in Wuhan where the outbreak began.

Health officials found no new cases of the virus being transmitted locally, according to the figures released by the National Health Commission. 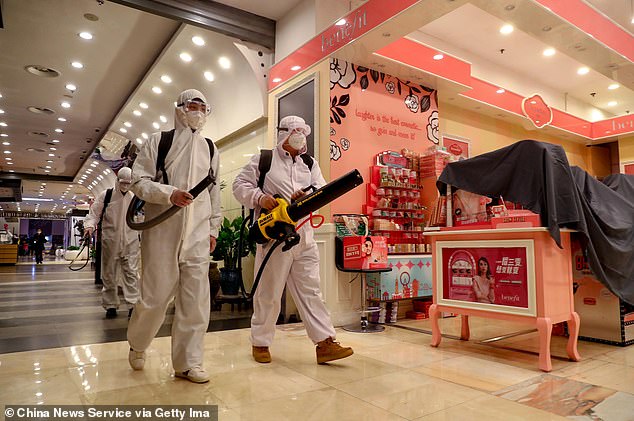 Wuhan has begun to loosen the restrictions that have been in place since January, resuming bus and rail services and opening shops.

However, there is growing concern about travellers bringing the virus to China from abroad, in a reversal of the original pattern.

Beijing has stepped up health screening and quarantine protocols, reducing the number of international flights and barring entry to many foreigners.

Of the latest imported cases, 10 were in northern China’s Inner Mongolia region involving travellers whose flights were diverted from Beijing to the city of Hohhot, state media said.

‘Beijing, the capital, still bears the brunt of the risks,’ said Xu Hejian, spokesman for the Beijing government, told reporters.

In Wuhan, the majority of shops on retail streets are now open but many have imposed limits on how many people could enter.

Shopkeepers have set up dispensers for hand sanitiser and checked customers for signs of fever. 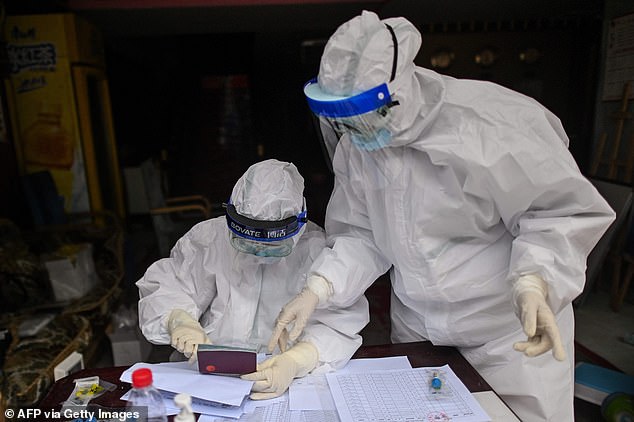 Medical workers check information as they take swab samples during coronavirus tests in Wuhan, in the original virus epicentre of Hubei province

Wuhan’s bus and train service has resumed, easing curbs that cut most access to the city of 11million people on January 23 as China fought the coronavirus.

The train station reopened on Saturday, bringing thousands of people to what is the manufacturing and transportation hub of central China.

Travel controls on most of Hubei province, where Wuhan is located, were lifted on March 23.

The final restrictions preventing people from leaving Wuhan are due to end April 8.

Car makers and other manufacturers in Wuhan have reopened but say they need to restore the flow of components before production returns to normal levels.

Some are waiting for employees who went to their hometowns for the Lunar New Year holiday and were stranded when plane, train and bus services were cut off.

Some parents were on the street with their children but traffic was light.

The latest figures bring China’s total count to 81,518 cases and 3,305 deaths, according to the National Health Commission.

Mainland China now accounts for barely 10 per cent of global cases, after its infection count was overtaken by the United States, Spain and Italy.

Tags: 48, another, China, impor, reports
You may also like
Recent Posts