Boris Johnson’s condition is improving – and he may even have been able to speak to his pregnant fiancee Carrie Symonds, it was revealed on Wednesday.

The Prime Minister remains in intensive care with coronavirus but is sitting up and ‘engaging positively’ with his doctors and nurses, said Chancellor Rishi Sunak.

No10 added that he ‘continues to make steady progress’ and is able to contact those he needs to.

This suggests Mr Johnson has been able to speak to Miss Symonds, although Downing Street has not confirmed this. The birth of the 32-year-old’s first child is only weeks away and she is also isolating after experiencing virus symptoms. 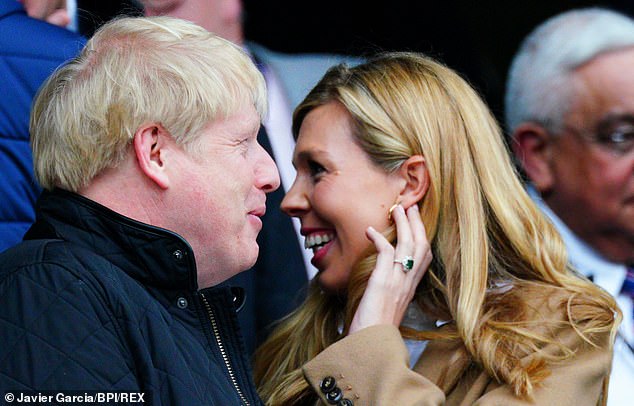 Boris Johnson’s condition is improving – and he may even have been able to speak to his pregnant fiancee Carrie Symonds (right), though Downing Street have not confirmed this

Despite the positive news for the PM, a leading doctor warned it ‘could be months’ before he was back to full health. Mr Johnson was taken to St Thomas’ Hospital in London on Sunday – more than ten days after testing positive for the virus.

He was moved to intensive care on Monday and given oxygen treatment. No10 said he had not required a ventilator and had not been diagnosed with pneumonia.

Despite initially working from his hospital bedside, he has since passed over responsibility to Dominic Raab, the First Secretary of State, who will deputise.

Speaking at the daily Downing Street press conference on Wednesday, Mr Sunak said Mr Johnson was receiving ‘excellent’ care. ‘The latest from the hospital is the Prime Minister remains in intensive care where his condition is improving,’ he said. 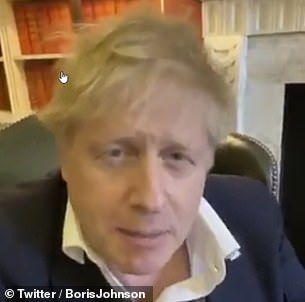 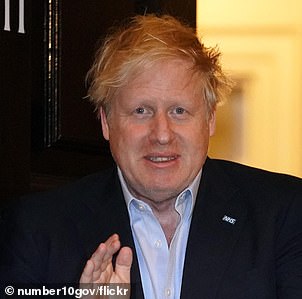 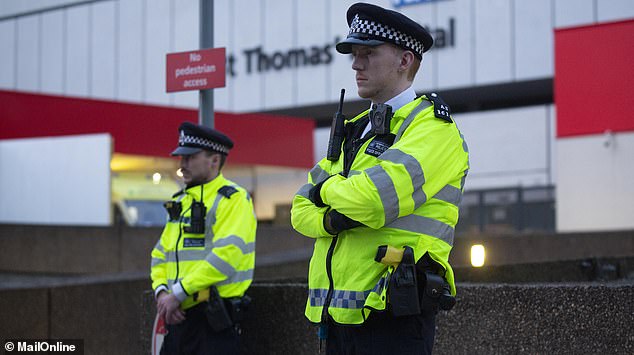 ‘I can also tell you that he has been sitting up in bed and engaging positively with the clinical team.’

He added: ‘The Prime Minister is not only my colleague and my boss but also my friend, and my thoughts are with him and his family. The news about the PM reminds us how indiscriminate this disease is.

‘Nearly everyone will know someone who has been affected – friends, family, neighbours, colleagues. This is a terrible virus that respects no boundaries of status or geography or vocation.’

The PM’s official spokesman said he remained clinically stable and was responding to treatment.

He added that Mr Johnson was in ‘good spirits’. Health Secretary Matt Hancock tweeted: ‘So good that the PM is sitting up and his condition is improving. He will fight through!’

Downing Street confirmed Mr Johnson was not working while in intensive care – and thanked the public for their support. Well-wishers across the country clapped for the PM on Tuesday night, while many sent fond messages.

The spokesman added: ‘We are hugely grateful for the messages of support that the Prime Minister has received.

‘I think the public response to coronavirus throughout has been fantastic and that has been best exemplified by the applause they’ve been giving to NHS staff every week.’

On Wednesday a Downing Street member of staff was seen holding up a drawing of a rainbow in the window of No10 with the message: ‘We are in this together.’ Hundreds of British schools have been encouraging pupils to put up rainbow paintings in their windows at home to ‘spread hope’. 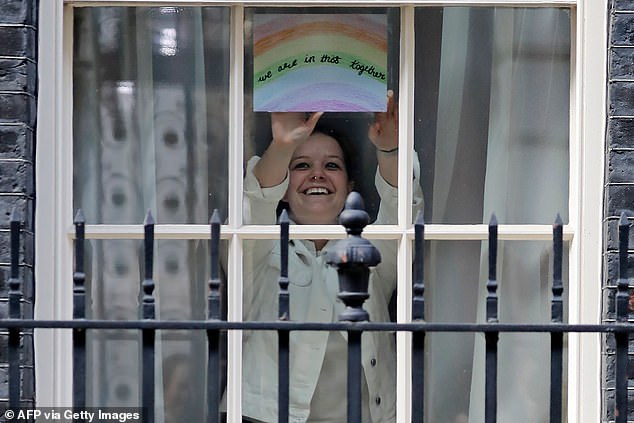 A woman sticks a poster of a rainbow, being used as a symbol of hope during the COVID-19 pandemic, with the words ‘we are in this together’ into a window at 10 Downing Street today 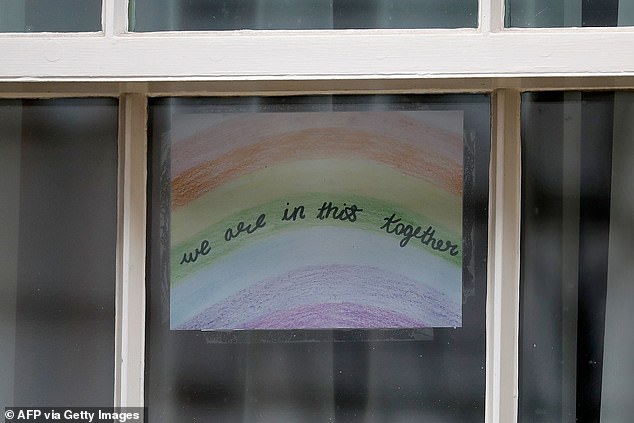 The heartfelt words carry a message of unity, as the country faces up to its battle against the rapidly spreading virus which has drastically altered daily life

Asked if anyone had been in contact with Mr Johnson since he was moved to intensive care, the spokesman said: ‘The PM is not working, he’s in intensive care, he has the ability to contact those that he needs to, he’s following the advice of his doctors at all times.’

Downing Street would not comment on reports that Mr Johnson’s persistently high temperature had fallen. It also refused to say whether his treatment is being overseen by Dr Richard Leach, Britain’s leading lung doctor, as has been reported.

It came as experts said Mr Johnson may not be able to return to full-time work at No10 for ‘months’.

Professor Anthony Gordon, an intensive care consultant at Imperial College London, said: ‘When you are seriously ill it does take time to recover. ‘It’s not an all-or-nothing thing… but it can take many weeks to get back to normal full health, or even months,’ he told BBC Radio 4’s Today programme.

Asked whether Mr Johnson should have had a personal doctor on call as happens in the US, Mr Sunak said: ‘I think the Prime Minister has received excellent care and advice every step of the process.’

Stephen Powis, National Medical Director of NHS England, said he was ‘utterly confident’ the PM was receiving excellent treatment. He said St Thomas’ was ‘world renowned’ for its critical care.

Tags: as, b, Carrie, joy, Symonds&apos;s
You may also like
Recent Posts