A leading Melbourne management consultancy has reported a spike in workplace bullying and harassment complaints as hundreds of thousands of the city’s workers continue the slow process of returning to their offices.

Barrington Centre is also warning that good workers are prepared to “vote with their feet” to maintain the work-life balance they found during the pandemic. 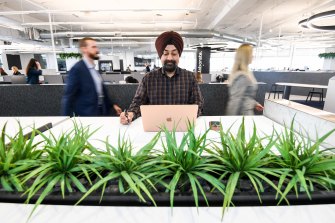 But a new way to manage the city’s return to the office is emerging as CBD-based organisations support their employees to take space at suburban co-working hubs, sparing them long commutes into the city but maintaining physical contact with the professional world.

Operators of the centres, which are springing up in some of Melbourne’s largest suburban shopping centres, filling space left empty by retailers downsizing, report business is booming as bosses and workers explore new ways of doing things.

The Age revealed last week that some employers were turning to psychologists to help coax reluctant workers back into the office. Struggling employees are also seeking help.

Barrington Centre managing director Rhonda Edwards said her clients were reporting a spike in workplace bullying and harassment complaints as workers still feeling the stress of the pandemic tried to re-adjust to their physical workplaces.

“What we’re observing is heightened anxiety around the return to the workplace, with the primary consequence that we’re seeing a spike in bullying and harassment complaints,” Ms Edwards said.

“There’s heightened sensitivity to workplace relations and the dynamics because people haven’t been in that space and what’s causing that, I believe, is fatigue and anxiety.”

Ms Edwards said her clients were worrying about losing staff, and attrition rates of up to 20 per cent were possible in some cases as a result of back-to-the-office transitions going badly.

Workers would also leave jobs that did not offer the level of work-life balance they had come to expect while working from home, she said. 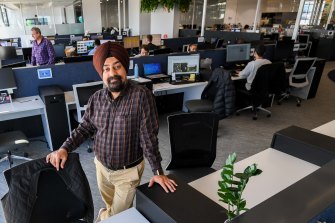 Mr Singh splits his week between suburban co-working, his CBD office and his home.Credit:Joe Armao

“If businesses don’t adapt, people will vote with their feet; they will go where they can get that [flexibility],” she said.

But Harman Singh has no such complaints.

When his employer, engineering giant GHD, began bringing its workforce back into its Lonsdale Street office, Mr Singh could not face the daily 2½-hour round trip from his Narre Warren home but still wanted to get out of the house for work.

So the smart cities practitioner splashed out $30 a month for a hot desk at a co-working hub operated by business centre firm Waterman’s in Narre Warren, about 10 minutes’ drive from his home.

With the support of his bosses, Mr Singh has found a hybrid model that works: two days at GHD’s city office, two days at Waterman’s and one day at home.

“It allowed me to get a feel of that office environment without going into the city but still be among a few other people and not looking at the four walls of my house that I’d been looking at for six months,” he said.

“Not having to commute allowed me to use that extra hour in the morning for my excercise and not have to skip that to get into the city for 8.30 or 9.”

Co-working has proved such a winner for Mr Singh that he is encouraging his employers to use suburban co-working spaces as hubs to bring groups of locally based GHD workers together on some days, re-creating the office but without the commute.

Waterman’s spokesman Chris Jbeily said the company’s centres had recovered from their COVID-19 low of 50 per cent occupancy and were back up past 80 per cent. About 20 per cent of new inquiries and leases were to companies taking working space closer to their employees’ homes.

Mr Jbeily said Waterman’s had established a hub at Chadstone shopping centre in Melbourne’s east and was expanding into Highpoint and Eastland as part of an aggressive growth strategy.

“We’ve got people whose companies have given them a travel budget to spend on a workspace … and there are some people who are happily going out and doing it out of their own pocket, just to get out of the house for a couple of hours, get away from the kids or whatever,” he said.

Tags: Back to Work, Rising, Tensions
You may also like
Recent Posts