John Cho, as Long the dragon, does his best Robin Williams impression in this film animation about a teenage boy who releases him from a magic teapot. 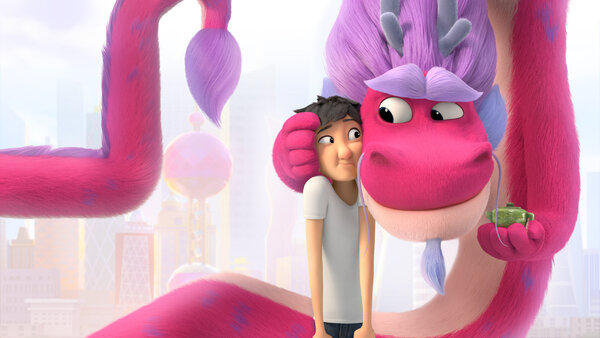 In the engaging animated feature “Wish Dragon,” a teenage boy comes into possession of a magic teapot containing a world-weary dragon who’s obliged to grant him three wishes.

The movie is geared toward children, but for anyone old enough to remember the Disney Renaissance, there should be a déjà vu warning: Netflix’s newest animation effort is essentially Disney’s “Aladdin” transposed to Shanghai. John Cho, who voices Long, the dragon, does his best impression of Robin Williams, who lent his voice to the fast-talking Genie in the 1992 Disney animation. But without the catchy songs and intergenerational appeal, this movie can only wish to measure up to that classic.

When the story begins, Din (Jimmy Wong) is a genial, imaginative child who soon befriends Li Na (Natasha Liu Bordizzo), a fellow troublemaker in school. The pair is shown cavorting in a best-friend montage that screeches to a halt when Li Na’s father moves her out of their humble neighborhood, saying, “We’re off to a better life, and we have to leave this one behind.”

Fast-forward by a decade: A chic Li Na appears on billboards around town, while Din lives in the same cramped apartment with his mother (Constance Wu), and works as a food delivery boy, all the while yearning to win back his partner in crime. If only a magical dragon could help Din bluff his way into Li Na’s moneyed circle.

Here, the movie goes full folk tale. Some moments, such as when Long’s voice turns squeaky-high as he squeezes back into his itty-bitty teapot space, seem to explicitly quote “Aladdin,” not to mention the airborne date Din and Li Na have on a flying dragon.

The biggest break from formula arrives through Long, the wish granter. Unlike the Genie, Long possesses a compelling human back story and follows a defined character arc. Absent a razzle-dazzle production number akin to “Friend Like Me,” endowing the dragon with some emotional depth is the least this movie, directed by Chris Appelhans, could do. “Wish Dragon” is a transporting experience, but it’s far from a whole new world.