This article includes spoilers about the plot of “The Suicide Squad.”

On the surface, “The Suicide Squad” is not a movie with geopolitics on its mind. Writer/director James Gunn’s hard-R supervillain romp is a loud, bloody, men-on-a-mission riff that owes more to Sam Peckinpah and Gunn’s own zany “Guardians of the Galaxy” than anything with complex historical connotations. Nevertheless, they’re hiding in plain sight, whether or not Gunn intended them to be there. Shot in Panama with signifiers that speak directly to its history with military dictatorships, “The Suicide Squad” has more layers than its absurd concept would suggest, even if it reduces them to B-movie conceits along with everything else on the screen.

The bulk of the movie takes place on the fictional island nation of Corto Maltese, and while its protagonists spend much of the time battling their way through scores of baddies and one giant kaiju menace, they’re surrounded by a far more grounded conundrum — one that finds Mayor General Mateo Suarez (Joaquín Cosío) taking over from General Silvio Luna (Juan Diego Botto), whose family has ruled the country for generations. As the Squad make their way toward an old Nazi compound to eliminate an extraterrestrial weapon trapped there decades ago, they do so alongside the efforts of guerrilla fighters (led by Brazilian actress Alice Braga) keen on overthrowing the country’s cruel military dictatorship.

That’s not pure embellishment: Suarez and Luna are cardboard villains, but not ones without real-world connotations, especially in light of the movie’s actual backdrop. Though “The Suicide Squad” was shot on 11 sound stages, Panama provided the bulk of its exteriors, with both Panama City and Colón offering additional context for a movie that wields the concept of Latin American dictatorships like an outsized historical prop. In press notes provided by the studio, production designer Beth Mickle says Colón was chosen because “it actually looked like a bomb had gone off and the townsfolk just walked away from the crumbling buildings, but under the dirt and debris are these really vibrant colors.”

The Central American country has endured two military coups in the last five decades, starting with the regime of the National Police that came to power in 1968, and continuing with arrival of Manuel Noriega in the early ’80s. Prior to his rule, Noriega was actually employed by the CIA on two equations to help the U.S. beat back the spread of communism and the Sandanistas in Nicaragua. Ironically, it was the U.S. that removed Noriega from power in 1989, ending his repressive rule by sending thousands of troops into the country for a monthlong stand-off that ended in his surrender. The same nation that helped propel the dictator into office eventually took him out.

So it goes with “The Suicide Squad.” Ultimately, the team of prisoners employed by the American government realizes that they’ve been tasked with taking down Starro, a giant alien starfish that American astronauts nabbed in orbit and brought down to Earth, only to leave him in the hands of a weaker nation willing to do the bidding of its more powerful neighbor. Once Starro is unleashed in the third act, it’s up to the movie’s renegade forces to take down the beast that their employers emboldened in the first place.

As a cinematic rumination on the specter of dictatorship, “The Suicide Squad” has nothing on the allegorical horror of Pablo Larraín’s “Post Mortem” or the satirical specificity of Woody Allen’s “Bananas.” For all of Gunn’s raucous music cues and vulgar asides, this is pretty dumb stuff. But it’s nevertheless a fascinating example of genuine historical turmoil manifesting in a giant Hollywood blockbuster.

Some may deem the plundering of a third world nation by Hollywood as pure capitalist exploitation — but the truth is that “The Suicide Squad” doesn’t turn its imaginary Latin American setting into a caricature any more than it does its ludicrous main characters, from Idris Elba’s cranky sharpshooter Bloodsport to Margot Robie’s giddy psychopath Harley Quinn. Each of their demented misadventures takes place with the underpinnings of some emotional struggle, as they wrestle with their own self-interests to do the right thing. Likewise, Corto Maltese provides an opportunity to explore how military dictatorships can solidify into the status quo until outside forces decide to pay attention. It’s a concept entirely in sync with deeply cynical movie, where the heroes are also the villains and never quite know whose side they’re on.

However one feels about this appropriation in theory, it’s clear that a lot of Panamanians have been hyped for “The Suicide Squad” ever since Gunn tweeted out a photo from the set. (“I can’t travel to Panama, but I can watch Panama in ‘Suicide Squad,’” read one tweet from a local living abroad.) “It was incredible,” Panamanian Film Commissioner Mastellari told me in a brief interview the day “Suicide Squad” hit theaters and VOD. “Our industry is very small here. When a production of this size comes here, it moves everything in our economy and transfers knowledge.” 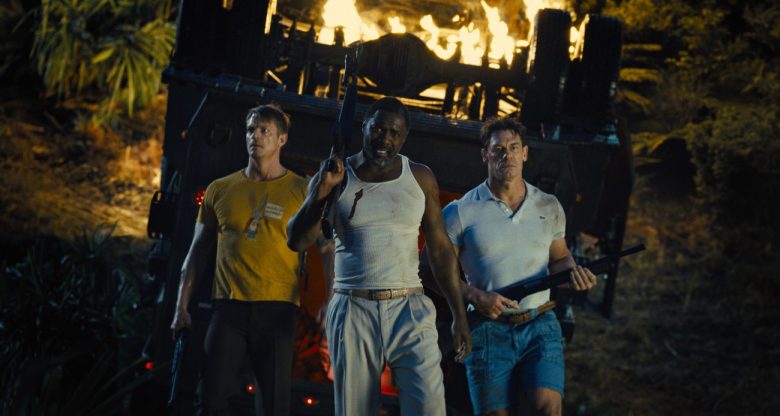 Warner Bros. approached Panama about shooting there at an auspicious moment, just a few months after the country passed a new law offering a 15-percent cash rebate as a production incentive for any production costing over $500,000. Mastellari estimates that the production $6 million in Panama, marking a key turning point for a country that has provided the backdrop for productions like “Paradise Lost” and “Quantum of Solace.” The movie ultimately employed some 600 extras for its dramatic finale. As the country reels from the pandemic and abrasive U.S. headlines about the immigration crisis, its presence in a giant spectacle provides some measure of hope for greater representation, if not in any of the movie’s central roles.

Mastellari hadn’t seen “The Suicide Squad,” never read a script, and showed little excitement about actually watching the final product. “It’s not really my type of movie,” she said. Asked about the militaristic context of the narrative, she was equally non-plussed. “Panama is Panama,” she said. “James Gunn said the filming here was great. It’s all positive for us.”

Tags: Panama, The Suicide Squad
You may also like
Recent Posts