There’s only a thin veneer separating David Simon’s adaptation of Philip Roth’s “The Plot Against America” to today. The story of the rise of fascism in an alternate America where Charles Lindbergh is president easily draws parallels to today’s political landscape and that’s before everything, including the entertainment industry, shut down due to the spread of coronavirus.

Content aside, Simon’s series also subverts audiences’ expectations of what the 1940s looked like. An era commonly associated with Old Hollywood glamour, especially in its costumes, was intentionally stripped and muted through the help of costume designer Jeriana San Juan. Here, San Juan takes IndieWire through the process of creating the looks, from inspiration to production:

What Drew San Juan to the Project

“What initially attracted me was the fact it was David Simon; he’s the Golden Child of HBO and he never goes wrong. He is such a masterful writer, and television creator, and I really wanted to have the opportunity to work with him but in addition to that it was the nature of the work itself. ‘The Plot Against America’ is an incredible novel and one of the most epic novels of our time, so that alone was this enormous challenge. When I read the book one of the most touching parts, to me, was the fact it was told from this young boy’s perspective, and he was an American child growing up in a first-generation [Jewish] family. That was something I personally related to very much because I, myself, am a first-generation American. So I identified with that experience.”

Where the Design Process Stars

“It did start with the book and it certainly starts on the page of our script. But it for me it really started with Philip Roth’s words in his book because he describes everything in such a visual way and I couldn’t I couldn’t help but be influenced with the way that Roth wrote about his mother, and the way that he wrote about his father, and the way he describes his brother or his relationship to his book of stamps. All that painted my mind because I really wanted to do justice to his work. It’s difficult going into something that is coming from a novel that is so familiar in [a] culture because people will have read it and already painted their own pictures in their mind, so I wanted to get that as a base to start with and start working into how it weaves into our story, in particular, and and use a relationship, for example, of the family, as a way to start creating color palettes and try to connect people through more than their relationship.” 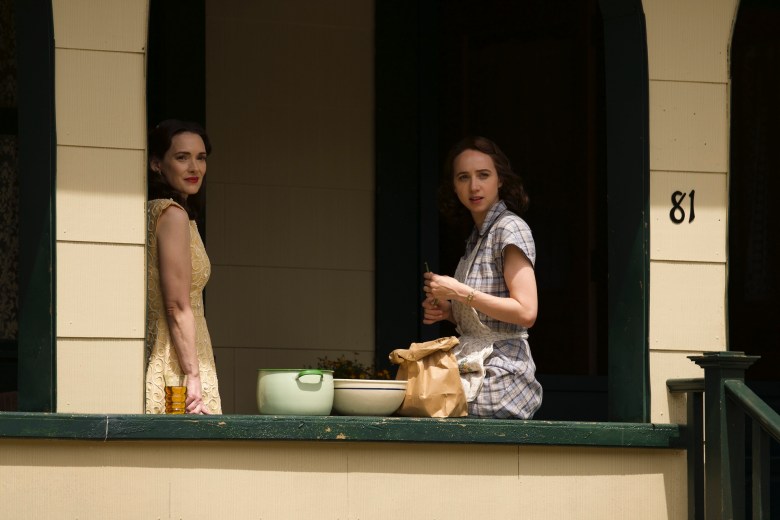 “The Plot Against America”

On Color and the Time Period

“We [were] purposeful with our use of color, and [our director] was very cautious of the color red – of when the color would be introduced – because in our story we wanted to tie red to socialist ties and anybody with Nazi ties, and make that an alarming and visceral touching color. We also wanted to this family into a palette that related to America and American culture. I looked at so many pictures of Norman Rockwell and ‘Saturday Evening Post’ images, that essential Americana. I started to pull from colors that feel like apple pie, or colors that feel like sunshine, colors that feel like a fresh green mowed lawn and a white picket fence, and blue-and-white gingham [like] when you think of Dorothy from ‘Wizard of Oz.’

We wanted to keep [the Levins] very working class and wanted to make sure that we know this family is not an affluent family. They are making ends meet and using fabrics that are going to be utilitarian and and last laundering them and hanging them on a clothesline to dry. So, it was very intentional to keep them out of silks or out of any fabric that would have luster or sheen, or that would read as an expensive fabric. We really save those things for Evelyn [Winona Ryder], for example, or Bengelsdorf [John Turturro] who’s wearing shiny shirts.”

“My biggest pride in this project was probably creating Bess’ [Kazan] housedress. I put so much love and care into that dress because I really wanted it to be that beautiful, sweet yellow. So it became about a perfect yellow which I had custom dyed on the beautiful vintage floral fabric. Then when I went back in I added notions of blue. I hand-painted the same color of Zoe’s eyes [to] the flowers in that dress. And then I went in and created that smocking on the shoulder detail and the zipper bindings are all the same shade of blue as her eyes. There’s so much emotion she conveys and I really wanted to draw the viewer’s eyes right towards them.

The apron for her house dress was a beautiful vintage fabric I acquired through an estate dealer and I had somebody follow a vintage, late-1930s embroidery pattern to create a little flower to embroider onto the pockets on the dress. All of those little moments are done with such love and care in the way that the characters would have approached owning clothes so I’m very careful to always make sure the details feel authentic to the character. For example, with Sandy [Caleb Malis], he wears this old pair of jeans that are inspired by a pair of jeans Pablo Picasso wore and so there’s some funky stitching that applies to the different pieces of denim used to patch jeans.” 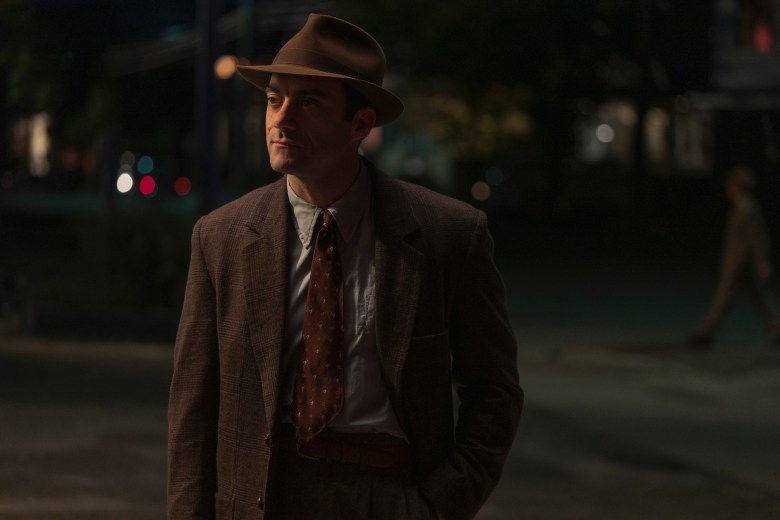 “The Plot Against America”

“It was the hardest thing to edit myself, especially if you are a fashion [or] vintage-phile. The 1940s was over the top accessories and over the top hats. Some of the most fabulous silhouettes are in it, like broad shoulders and crazy belts, and I live for all of that. My only chance to exercise that a little bit was with Evelyn, who [is] the one interested in movies and fashion. She idolized Barbara Stanwyck so I fashion[ed] her after Barbara Stanwyck. With Bess, when you look at pictures of actual working families in the 1940s, the early 1940s, their clothes actually came from from the mid- to late-’30s. I had to be true to the fact that they would have been wearing clothes from an earlier time and not want distract from the intensity of the story.”

The Input of Cast and Crew on Costuming

“That’s one of the most important things to me as a designer to facilitate an actors’ performance. She [Zoe] is such an incredible actress and collaborator. She was so wonderful to work with because we found Bess together in the fitting. She was a character who prided herself on symmetry and things that felt like a neat little bird, nested and carefully tailored. Morgan Spector also is an amazing collaborator. He’s a very fit, handsome man and we tried to find ways to cheat how fit he was and make our character of the father look a bit more fatherly. He helped with his posture and holding his body in a way that wasn’t quite so virile and strong. He was going to hold his back with a little more curvature and have clothes hang off of him in a way that was less form-fitting.”

Tags: Costume Design, HBO, The Plot
You may also like
Recent Posts