Home
TV and Movies
'Survivor 40: Winners at War': Boston Rob Was the First One to Look for an Immunity Idol at Tribal Council — Not Adam

Since Wednesday night, fans cannot stop talking about Adam Klein‘s iconic immunity idol move at tribal council. Many people are making fun of him for trying to pull an idol off of the voting podium that Jeff Probst was standing at. However, it turns out that Boston Rob Mariano was the first person to look for an idol at tribal, not Adam. 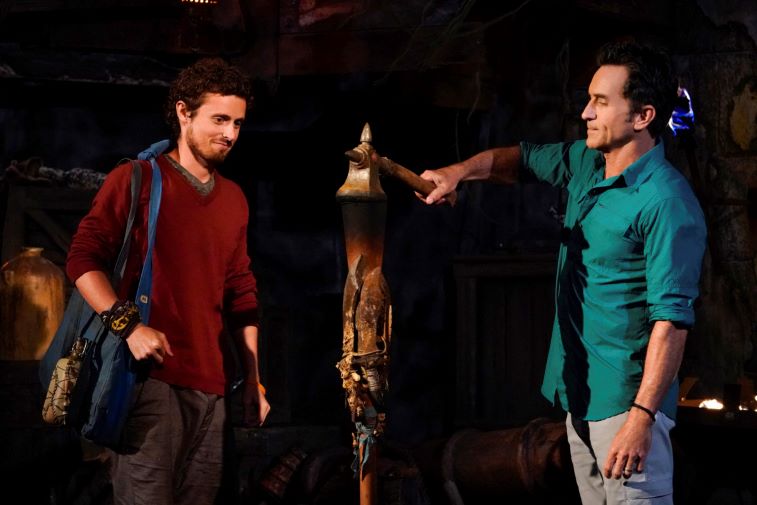 On ‘Survivor: Winners at War’ Episode 9 Adam attempts to pull an idol at tribal council

During tribal, Adam knows he is going to be voted out, so he walks up to Jeff Probst. Then he proceeds to pull at the fleur-de-lis that is on the front of the podium.

“Damn. Nothing, huh?” Adam says to himself as he is yanking at it. “Not anything? Looks like maybe it was something — worth a shot. I don’t know. Maybe that was an idol?”

Both the castaways and the jury members stare at Adam, wide-eyed. Some laugh, but others want to know if the fleur-de-lis is a hidden immunity idol.

“You want to play this?” Probst asks Adam. “This thing that you can’t get off of the voting podium?” All of the jury and the castaways begin snickering at this comment from Probst.

“If that is an idol,” Probst continues. “It would be historic. The first idol ever, hidden at tribal council, in plain view of all players, selected by you and played for you.”

Probst draws out his next sentence for several seconds before he says, “That is not a hidden immunity idol.”

All votes cast for Adam still count, and he is the eleventh person voted out of Survivor: Winners at War.

Episode 1 of ‘Survivor: Winners at War’ saw many castaways search for idols at tribal council

During the filming of Survivor, press members have the opportunity to attend some parts of the show, including the tribal council. Dalton Ross from Entertainment Weekly was present at the first tribal council.

“While it did not make it onto air, at the first Tribal, Boston Rob started full-on examining the shelves in the voting area looking for an idol while Ben looked under objects on the voting table to see if there might be any secret messages,” Ross wrote for Entertainment Weekly. “Many players felt there was a chance that an idol might be hidden somewhere at Tribal Council.”

What do you think of @bostonrobmariano plan? Does the buddy system work? 🔥 #Survivor

During the season, Adam look around several times to see if there was an idol in the voting room. He’s likely not the only one who thought the fleur-de-lis could be an immunity idol. The guy is the first one to put it out there and try it.

“I know he watches international Survivor and idols have been hidden at tribal in Survivor South Africa and Australian Survivor,” wrote one Reddit user about Adam’s reasoning. “Plus, Jeff has mentioned hiding an idol at tribal as an idea for the future.”

Fans of Adam avidly defend his antics at tribal council. They voice that the international versions of the show have done this already.

“Jeff has literally been saying for four years now that they want to put an idol at tribal as their next big twist,” another fan wrote.

It looks like it was a very plausible theory that an idol was hidden somewhere at tribal council. However, it looks like Adam was not the one to find it. Survivor: Winners at War airs Wednesday nights at 8 p.m. on CBS.

Read more: ‘Survivor 40: Winners at War’: Malcolm Freberg is Confident that Denise Stapley is the Next Sole Survivor

Tags: 40:, At, survivor, Winners
You may also like
Recent Posts