Jim Parsons and Ben Aldridge star in this tear-jerker romance adapted from the memoir by the television journalist Michael Ausiello.

Send any friend a story

As a subscriber, you have 10 gift articles to give each month. Anyone can read what you share. 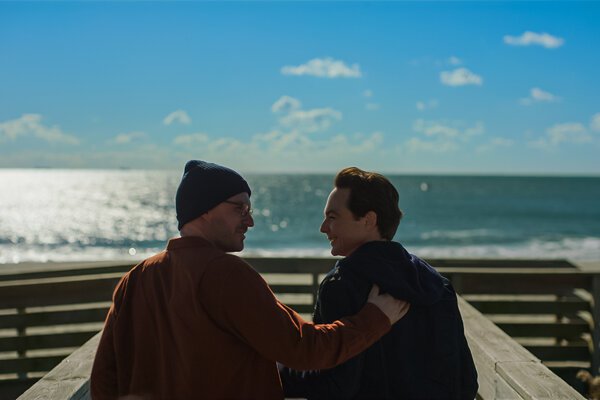 The awkward weepie “Spoiler Alert” charts the rocky romance of the Manhattanites Michael (Jim Parsons) and Kit (Ben Aldridge) from meet-cute to cancer. Its director, Michael Showalter (of the coma comedy “The Big Sick”), is becoming a medical specialist. Jean-Luc Godard needed a girl and a gun; Showalter prefers a couple, their in-laws and a hospital bed.

The tears — which, yes, are in time duly squeezed — stem from Michael Ausiello’s memoir of the same name. A television journalist, Ausiello interjected digressions on his love for “Felicity” into his recollections of biopsies and scans. The screenwriters David Marshall Grant and Dan Savage (of the sex advice column “Savage Love”) expand on Ausiello’s depiction of himself as a bashful screen obsessive whose insight into human behavior comes mostly from fiction. Their Michael continually clicks over from reality into an imaginary TV show where saxophones and canned laughter take the sting out of his pain.

It’s a clever conceit, though the execution flounders in part because Parsons, who had a 12-season stint on “The Big Bang Theory,” can’t shake the sitcom off himself in the serious sequences. A bigger problem is that the so-called sincere dialogue is either blunter than a soap opera (“It’s his mother. He told her not to come. I’ve never even met the woman.”) or hammier than a Hawaiian pizza (“Hey honey, I’m cancer! I mean, I’m home!”) These clunkers could work if the film had the moxie to demand a laugh. Instead, you can practically see the actors wince.

The story opens with serious piano chords and synthetic strings, then rewinds to let Michael narrate the beginning of his courtship with Kit. They’re an odd pairing: Michael’s a teetotaler who collects Smurf figurines; Kit, a semi-closeted stoner who collects admirers at the gym. As patient as these early scenes are, we’re still unconvinced they make an ideal match when the film leaps ahead over a decade and concedes that they don’t. Enter cancer, which holds the two together against the threat of permanent separation.

The film is strongest when it falls silent, allowing the actors to communicate their thoughts with a look. A glance at an older couple at a restaurant tells us everything about Michael’s panic that his fantasy future is slipping away; later, when Ben breaks the news of his diagnosis to his parents (Sally Field and Bill Irwin), the camera steps outside into the yard to bear witness to the moment through a window. As the mood darkens, even this underwhelmed critic misted up at the sight of the two men quietly holding each other in bed. It’s the ideas left unsaid that linger, the film’s observation of how couples make room for each other’s foibles, visualized here by a phalanx of Smurfs siloed to a display shelf in their shared apartment. Showalter seems torn about tying up this tale with a scripted bow, as Michael might prefer. Ultimately, he chooses to leave the audience with enough threads that we can, or not, pull them together ourselves and decide that life must go on even after someone calls “Cut.”