Home
TV and Movies
Snowfall's Damson Idris on Franklin's Gangster Flex in Season 4 Finale: I Felt Like I 'Scored 70 Points for the Lakers'

We have to talk about that Snowfall walk-off.

Or is strut the better word? Either way, a wounded and vulnerable Franklin Saint (Damson Idris), who pimp limped through Season 4, hung up his cane and his pain in Wednesday’s Season 4 finale and said goodbye to Melody and all the heartache in his past before walking off-screen to Curtis Mayfield’s “Pusherman.” And it was a moment.

First, Franklin flew all the way to Odessa, Texas to see Mel and deliver the news about Irene’s death. A death Mel is indirectly responsible for — at least in Franklin’s eyes.

“I’m not mad at you for shooting me,” he said menacingly. “I know you was f–ked up on that pipe. And in the end, I’ve come out of it stronger. So I was going to let sleeping dogs lie. But then you decided to go behind my back and talk about my business and create a whole s–t storm of problems for me and mine, and I can’t have that.”

A tearful Mel then asked Franklin to tell her that he killed her father, Andre, so she would know she’s not crazy, but Franklin refused to give Melody the satisfaction. Instead, he told her to take care of herself, walked away, stopped as if he might’ve changed his mind about killing her, but didn’t. Instead, Franklin hooked his cane on the back of a chair and calmly and confidently sauntered away in such a fashion that even The Usual Suspects screenwriter Christopher McQuarrie would be proud. 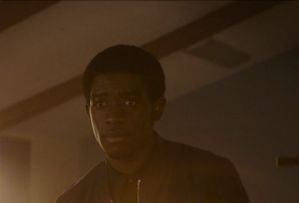 “That Keyser Soze moment was really special,” Idris tells TVLine. “It was something we had been building up to throughout the season. The biggest thing for viewers was, ‘When are we going to get back to Franklin being well?’”

“He’s so vulnerable,” Idris continues. “It created a great sense of tension. And Franklin knew that, too. To get to that final moment with Melody, it’s almost as if the job was done. And he doesn’t need anyone to see him as being vulnerable anymore. He doesn’t need to be 10 steps ahead anymore. Now he can just focus on the business. And he realizes in that moment that he’s come full circle. That’s why it was special putting down that cane.”

Idris says on the day that director Carl Seaton shot the final scene, everyone on set had the actor’s back and cheered for him.

“The fantastic Carl Seaton and everyone was there, and I did it,” Idris beams. “I walked away, and when I came back in the room, it was as if I’d scored 70 points for the Lakers. It was just such a special moment. It verified just how far Franklin has come this season. And with all of the doubt, he was able to come out strong in the end.”

Seaton, Idris and Reign Edwards, who plays Melody, shot the scene a dozen different ways, Idris confesses. But the scene we saw in the end was the best one. It was not, however, the funniest.

“In one take, as a joke, I walked away like Wesley Snipes in Coming 2 America,” Idris admits with a chuckle. “We couldn’t stop laughing.”

Give the Snowfall finale a grade in our poll, and then hit the comments below to share your thoughts.